Fifty Shades Of Grey Rectangle And My Bonkers Moving Tips 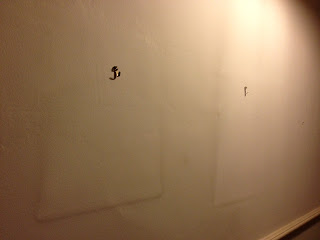 Apologies for the rather longer hiatus between posts than intended. I am happily installed now in the new house, which I love to bits, but it is only fair to say that nearly two weeks on, facilities at Bonkers Towers II remain on the rudimentary side. To give you an idea, I am typing this atop a makeshift "desk" fashioned out of apple boxes - well, more of an island than a desk - two islands in fact, as you can see in the photo, with leg room in between. A small rope bridge might not go amiss. I note with interest that one box is labelled "perfume stuff and jewellery bedroom (any)". I had been wondering where my jewellery went as I got ready to go to London earlier this week.

Anyway, the move went pretty well on the whole, though it was not without incident. On gaining access to the house for the first time, it was obvious that the whole place needs redecorating: this is because the previous owner was a bit of an art collector, and when she took away all her paintings she left behind a forest of picture hooks at irregularly spaced intervals, exposing fifty shades of grey rectangle on the walls beneath. 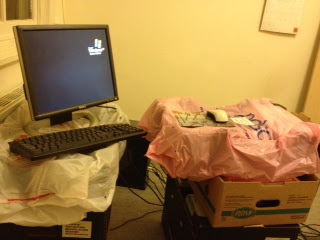 It is an Edwardian house as I mentioned in an earlier post, and its wealth of period features include the original cast iron bath, together with a set of period household appliances. Okay, I am exaggerating shamelessly, but for example the fridge struggles to reach a cooler setting than 10 degrees; while this may be the optimum temperature for keeping perfumes cool, it is of course not recommended for the hygienic preservation of food.

Consequently, shortly after my arrival in the house my perfume collection was exiled to a downstairs shower cubicle curiously located in the utility room, while one of my perfume fridges was immediately pressed into service as emergency storage for the perishable stuff from the old house, Mr Bonkers having only been interested in securing custody of the milk, margarine and a couple of pizzas. 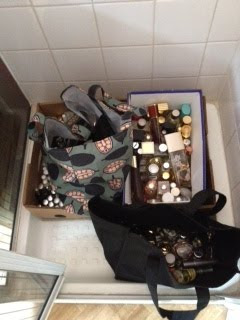 So that was one infrastructural setback I needed to deal with as soon as I moved in - and there were others involving cheeping smoke detectors, blown light bulbs, sluggish taps and a possibly perished expansion tank. So between the state of the house as I found it and the events of moving day itself, I have compiled a shortlist of my top tips / learning points from the move - which I hope might have some entertainment value even if they are not of imminent use to anyone reading.

Incorrect labelling is a surefire recipe for moving mayhem

The making of my bed was delayed 48 hours by the non-appearance of the mattress protector, only for it to surface in a box marked "kitchen", cosying up to the missing stash of Kettle Chips I had just fancied snacking on on my first night. In my defence, this was one of the boxes the removal men packed on the day, its comedy combination of contents doubtless prompted by haste rather than a sense of mischief.

Do the moving men mug maths

On the day of the move, the alarming realisation quickly dawned that I only had access to two mugs to be shared amongst three thirsty removal men. Consequently, more mental energy was expended on the organisation of an elaborate mug usage roster - "If Stewart and Tony just had a drink, it must be Vin's turn...so where is Tony's mug, then?" - than on almost any other aspect of this complex logistical exercise. 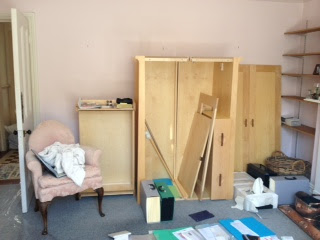 Get the measure of the place before you move in

By which I specifically mean the room measurements really, to enable you to gauge what furniture goes where. Sounds easy enough, but even with the best laid scribbled dimensions on a piece of file paper you can't quite put your hand on on the day (along with mugs 3 to 30), a couple of bulky upstairs items are bound to end up temporarily sidelined in a downstairs room. Here they await the moment when (with any luck) a sudden access of spatial awareness may strike you and their final resting place will become apparent. 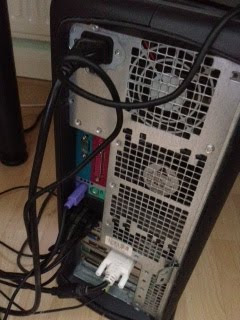 Think of your computer as just a glorified colourful jigsaw

Okay, so this one didn't really wash with me, and the photo key didn't help much either.

Assume an indefinite procession of visitors with dirty feet

On moving day, after the removal men have effected the elaborate swaddling of your new house using giant rolls of sticky cling film in a bid to minimise the traipsing in and through of dirt, it becomes unthinkable that anyone visiting the house in future will ever be allowed to make direct contact between shoe and carpet again.

Yes, since Charlie Bonkers was successfully transplanted to the new house, she has been on selective hunger strike, by refusing to eat her normal fare of IAMS crunchies. The unspoken message appears to be: "Look, I have been fairly adaptable through all of this disruption and upheaval, so if you don't give me top of the range foil pouches instead of this gravel stuff that hurts my five remaining teeth, I shall start chowing on down on this cheese plant, poisonous or not." 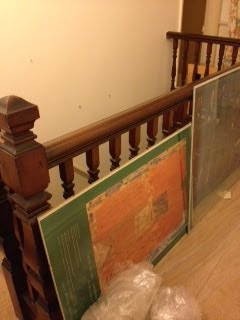 Discourage your pet from tombstoning from an upper landing

Yes, a cat that is reckless enough to chew on the leaves of a cheese plant in a fit of pique is capable of launching itself off the landing through one of the generous gaps in the banisters, much like the generations of thrill-seeking babies that went (head first) before it.

And finally, although I didn't capture the cheese plant-eating incident on camera, I did witness Charlie Bonkers' close encounter with a bed of cat nip during her first supervised outing in the garden. At least I assume it was cat nip, though I am not very hot on plants as we have established. 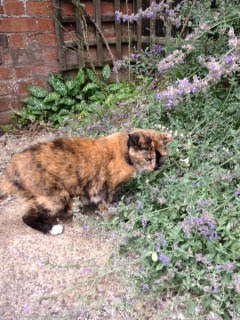 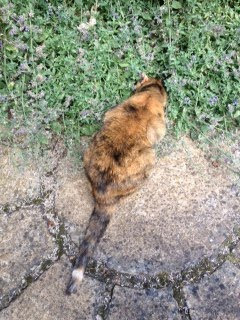 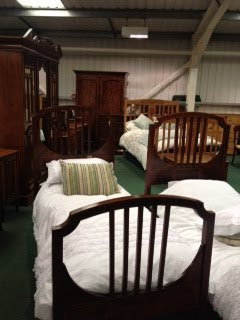 It may come as some surprise to readers to learn that I haven't actually moved yet: I should have been installed by now, but the vendor of my new house deferred for a week, so the big day is now next Wednesday. I have, however, been largely off the blogosphere radar in the past fortnight due to a rush work project - my first paid work this year! - which of course I grabbed with both hands even though its timing could have been more opportune.

In any spare moments I have carried on with the decluttering and packing process, as well as stalking Ebay and making forays to local antique stores in the hunt for essential items of furniture such as a dining room table and chairs. Some of my Facebook friends may have clocked the recent table coup - I posted a photo of it on my wall - but the quest for chairs is still ongoing.

I have been so consumed with work and house stuff lately, that not only is my perfume hobby firmly relegated to the back seat - I wonder what type of seat, and whether it would work with the table? - but some days I am still forgetting to wear perfume. Therefore you may imagine my surprise this morning when these two worlds of furniture shopping and fragrance unexpectedly collided during a routine sortie to inspect some French Edwardian chapel chairs in Cannock. 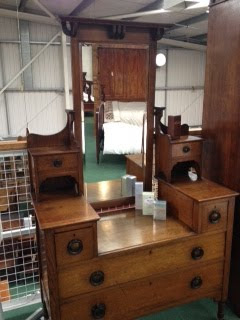 For there atop an Edwardian dressing table was the following incongruous collection of perfume bottles:

And perched on an upper shelf, to which its adventurous spirit had doubtless prompted it to clamber, was Davidoff Adventure.

I was just chuckling to myself about these fragrant anachronisms - where, pray tell, are the vintage Guerlains and Carons?! - when I spied another arrangement on a Victorian dresser against the far wall, comprising: 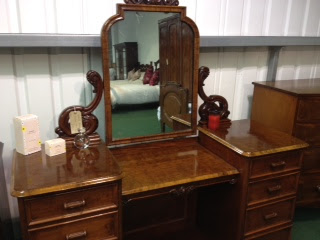 And on the opposite side on its own:

Now in recent weeks I must have visited upwards of 10 different antique shops, but this is the first time that I have found any items of bedroom furniture "accessorised" - or is the word for it perhaps "staged"? - with perfume bottles, never mind such comically modern ones. A tortoiseshell or silver-backed hairbrush or one of those lace doiley things might have been more in keeping.

What were the owners of the store trying to tell their customers, I wondered? Interestingly, no other ornaments were used on any other items of furniture to suggest possible usage. There were no fruit bowls on the dining tables, no hats on the hat stand, no monks on the monks bench, for example. 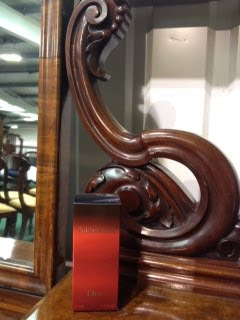 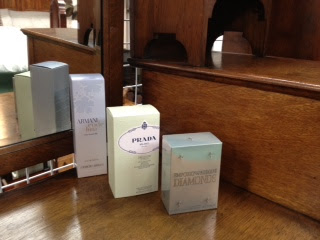 Maybe it was a message from on high to me not to completely forget my love of perfume in all the hurly burly and chaos of the move. The very incongruity of Diamonds and Daisy etc may have been deliberately intended to provoke a shock reaction, which it surely did.

So here I am, marooned in a sea of cardboard boxes, but wearing perfume again and blogging about it!

Meanwhile, the little French chapel chairs didn't quite cut the mustard (they are lighter and more variegated than they appear in this photo). 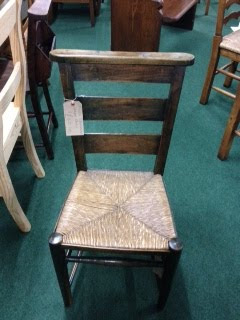 However, I have my eye on these ones from Lincolnshire instead... 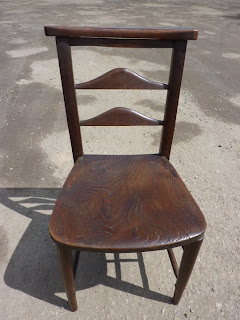 Photo of Gainsborough chapel chair from churchantiques.com, other photos my own