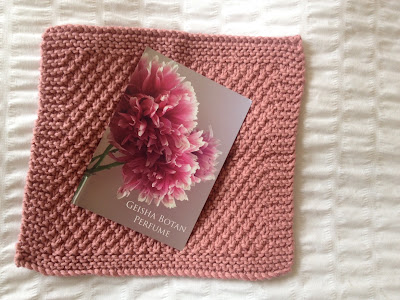 I don't know where the time goes, but I have just checked when I started Bonkers about Perfume, and it is 25th October, 2009. Some years I celebrate my blog anniversary late - up to eight months late in 2013!, then I may even have forgotten it altogether the odd time, while this year I decided to mark the occasion a day early, why not?  I do wonder if it is a bit cheeky to have an anniversary at all when my posting has become sparse of late, but I guess I am still just about going at least, on my tod, after a fashion. Or rather not after a fashion, as being on trend or 'in the swim', or even vaguely Zeitgeisty is not really my way.  I can't even bring myself to do Instagram and engage with those pesky thickets of hashtags, but that is a matter for a whole other post some time.

Behold, a cake that says nine...do those look a wee bit like peonies to you? Just getting in the mood...

Truffle is thankfully asleep as I type, for she really got her claws into the bag containing HOCB Immortal Beloved last year. 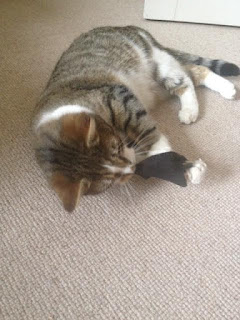 And on to Geisha Botan, two samples of which arrived from Maria of Aroma M this week. Now I did have a number of perfume-themed (no, really!) posts in the pipeline, so the fact that this review (after a fashion) has catapulted the scent to the top of the queue - or to the mouth of the pipeline, should that be? - speaks volumes. This is suddenly the perfume I want to write about most of all, as you may rightly infer.

Before I tried Botan, I had a quick glance over the PR blurb that was sent with it. The first thing to mention is that Botan is another Japanese-inspired scent - as its inclusion in the Geisha range would suggest indeed - moreover the word Botan actually means 'peony'. I have to say I would never have made the connection, for Botan is quite a heavy word, and peonies blowsy but lighter somehow, even when they droop, of which more anon. My mind also keeps drifting towards 'butane', from which obviously I quickly yank it back. To top things off I have a type of monkey image running through my brain, but I may in fact merely be conflating Borneo and Orang-utan.

So it is doubtless best to move on from such unhelpful free associations and return to our peony muttons. The potted version of the story behind Botan is as follows: newly arrived in Tokyo in the 1980s, Maria visited Ueno Park, noted for its 17th century Toshogu Shrine. Here she chanced upon a peony garden and was struck "not only by this flower's profusion of bedazzling jagged-edged pink blossoms, but by its gentle rose-like scent." Maria considers peonies "quintessential Asian flowers" and harboured a long term wish to create the quintessential peony perfume herself one day. And now here it is.


On a side note, I used to have two enormous peony bushes in the back garden of the house I shared with Mr Bonkers. The blossoms were incredibly profuse and a very pale pink, and every year I would 'kettle' them in a kind of metal pen to stop the heavy heads drooping till they eventually caused the whole plant to fall over. The bushes bloomed every year all the time I lived there, but I suspect Mr Bonkers - not someone overly endowed with green fingers - may since have managed to kill them, if the fate of my beloved Pieris is anything to go by.

Now, returning to peony-inspired perfumes, in the spirit of full disclosure I didn't think I was a big fan of these. There are a few I have tried, and they can be a bit watery and insipid, or occasionally even tart. Moreover, I associate them firmly with spring, so was faintly puzzled to be receiving samples of a peony perfume in October. Though the timing of the package may have been fortuitous. Anyway, I need not have worried...oh no...

This was a peony perfume with welly. The plushest of peony perfumes ever made. It is thick and powdery and velvety and musky with just the right amount of sweetness. The peony and rose notes are beautifully blended with the lighter peony keeping the rose from being overly dark and Gothic, a la Czech & Speake's Dark Rose (there's a clue in the name!). If I remember rightly, it was also a touch agar woody and used to catch in my throat.

Now I do love gourmand orientals (being the happy owner of both Parfumerie Generale's Brulure de Rose and Tauer PHI Une Rose de Kandahar), and when Maria described this to me as a 'floral gourmand', that seemed spot on. If anyone remembers Sonoma Scent Studio's Velvet Rose, I am reminded of its rich, velvety texture, if not its scent particularly. And there are one or two other fragrances with this kind of vibe that I can't summon up for the moment. But think the olfactory equivalent of sensuous velvet damask cushions and you won't go far wrong. Funnily enough, I was thinking of getting this very one for a friend as a present. Interestingly, I imagine there is a phantom hint of plum in Botan for some reason, which I swear I detected before lighting upon this plum - and pleasingly plump - cushion!


I can see me wearing these samples of Botan all through the winter, day or night. Botan is a light heavy oriental, if you know what I mean. A soprano as it were. But it has heft and swagged folds too. While managing to completely avoid being the sort of powdery diva scent you would associate with a stout opera singer. I love the idea of an peony oriental scent - it really does seem to subvert the usual conventions. I am very drawn to Maria's other amber-forward creations, both for Aroma M and House of Cherry Bomb, and now I am delighted to have discovered a whole other fragrance style of hers that moves me to the same extent.

Oh, I say, I have just googled an image of the bottle - my very first sighting of it - and look what colour it is!

Come rain, shine, or anything in between: Miller Harris La Pluie review 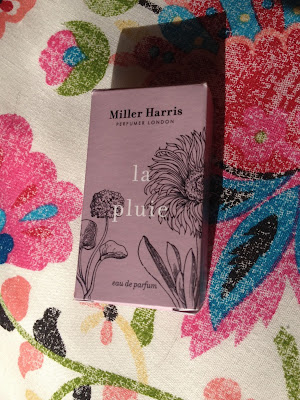 I am afraid it has been another funny week or two: I am still beset with delays and problems on my renovations, due mainly to an unhappy mixture of incommunicado and astronomically priced tradesmen. On top of that I had a ten day-long cold with a side of exhaustion and headaches, topped off with an odd house guest and a doomed insurance claim, the very thought of which makes my blood run - not cold exactly, as it is unseasonably warm outside - but cooler than whatever temperature blood tends to be as a rule.

Perfume-wise it has been a strange old time as well. Initially I was so distracted that I forgot to put any on, but then something happened: I unthinkingly sprayed on Miller Harris La Pluie one morning, as a sample vial just came to hand in a sponge bag, and found myself reaching for it day after day, as though on autopilot. I don't believe I have ever worn a single perfume on so many consecutive occasions - it is most unlike what my conscious self would do, or even approve of. But La Pluie has been hitting the spot, so I have stuck with it.

Ironically, though I have had this sample for ages, I have consistently passed over it up till now. La Pluie hadn't really registered or imposed itself on my nostrils or memory. I remember it as inoffensive and nondescript, and it certainly is the former, however I now think that it does have quite a bit going on in a quiet, companionable way. And that is just the kind of perfume I am drawn to at the moment, something gentle, soothing and supportive, like the way Truffle was during the worst of my cold, snuggled under the covers with her head lying facing me on my outstretched arm, and her paws resting empathetically on my neck. Truly a laying on of paws, if such a thing exists, and most therapeutic at the time. It was only when I started to get up and display signs of normal behaviour that Truffle decided she could dispense with her 'under covers' vigil and go outside. So La Pluie is, if you will, the scented equivalent of a consoling cat. In short it is ideal for when it rains, when it pours(!), when it drizzles, and for bizarre episodes of Indian summer weather as we have today.

So how does La Pluie smell? Well, in the opening I do just about get a fresh and dewy bouquet of those white flowers (don't ask me what, obviously). I am a little reminded of Annick Goutal's Un Matin d'Orage, which has a similar damp floral effect. But there is a weightiness to the composition of La Pluie even at this early stage, and a powdery note almost immediately creeps in, never to leave. As the scent develops, the powder at times seems 'granular', and I don't think I am hallucinating (thought given my recent illness, the possibility cannot be excluded) and the scent takes on a wet pavement kind of facet. 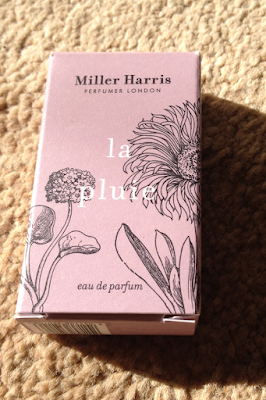 Also, the lavender is always in the background, but not in an overt, identifiable way so much as a kind of herbal counterpoint to the floral / orangey aspects. I don't generally like lavender as a note in perfume, which is testament to how subtle and well blended it is here. There's a soupcon of spice too, rather like Tom Ford Private Blend Shanghai Lily, but a million times more muted (and I love Shanghai Lily). Pepper? Clove? Carnation? No idea. And then over time La Pluie gradually fades away to an almost indescribable powdery, yet faintly tangy murmur. (That'll doubtless be some combo of the tangerine and ylang-ylang, a note of which I am inordinately fond.) There isn't any dankness to this rain-themed scent - and over its whole trajectory there is far more powder than moisture to be fair - and no hint of earthiness or petrichor. The powderiness could perhaps be likened to the faintest of light drizzles falling tinglingly on your skin, and there is that brief and possibly chimerical pavement interlude, as I say.

But rain is really not what I would have thought of on my repeated wearings of La Pluie, had it not been suggested by the perfume's name. Hence why my chosen photos show La Pluie in various sunlit spots round the house. ;) I am not sure I even agree with the description of the perfume on the sample box as: "A story of tropical showers and the balmy climate of a faraway island". Except perhaps by way of fleeting glimpses, but these are always wreathed in powder. Un Matin d'Orage comes much closer to that 'unalloyed damp flowers' visualisation.

So there you have it...by no means a showstopper, and not necessarily even that memorable, though after my marathon wearing of La Pluie I for one will definitely remember it. But exactly the undemanding, comforting hum that you look for from a scent when it seems that all around you are losing their heads, and you reckon yours can't be far behind.