Bonkers is indisposed and on hiatus (not hernia, I don't think!)

I am sorry for the longer than usual interval since my last post (even by my own leisurely slow blogging standards), but I haven't been well lately - ever since I had my first dose of the vaccine as it happens, though I am hoping that is a case of 'correlation, not causation'. Or that at the very worst, the shock of the jab may have lit a blue touch paper of latent conditions, and prompted a number of organs to flare up at once. I did have a couple of prior symptoms which both might loosely come under the umbrella of 'digestive distress', but things have ramped up to include a mildly insulted pancreas, nightly heartburn, and more besides.

I happened to mention this (genuine medical ;) ) description of my pancreas to a solicitor friend who instantly quipped: "A mildly insulted organ? My liver is probably curled up with gross defamation of character!"

For the foreseeable future I have been told to give up alcohol (though I was only drinking three days a week latterly), all supplements, and caffeine, though I sneak in the odd cup of decaf tea here and there. FYI, Yorkshire Tea with the blue flash is the best I have tried. Then it seems the pancreas doesn't care for gin, while the oesophagus hates tonic and lemon, so between them they are a right pair of party poopers. I have thoroughly researched pancreas-friendly foods and non-acidic ones that are good for the oesophagus, and am endeavouring to placate both organs at once (and not add injury to insult, hehe) by eating the intersecting set. This requires a lot of fancy dietary footwork, as you might imagine.

Unfortunately I still have to live with uncertainty about the cause of these symptoms for a while longer, as investigations are ongoing. The one I had today involved a 24 hour fast in the run up, which was tough. I never thought I would get my head around construing a beef OXO cube dissolved in hot water as dinner.

I had a helpful sheet of instructions to guide me:

"You should aim to drink a glass of water, juice, tea or coffee WITHOUT milk every hour up to two hours before your investigation. (Except when sleeping)."
The sleeping exemption was greatly appreciated ;), though Alexei Navalny could have managed such a stunt with ease, as they are apparently waking him every hour in prison, poor man.
This morning's procedure was billed as 'virtual', but I can confirm that while it may have been virtual in technical terms it was the furthest thing from sensation-free(!). Still, it should rule in or 'eliminate' a few suspects, so I am most grateful to have been offered it. Had I fallen ill last April the situation in hospitals would have been very different...
Now I know it is generally considered bad form to link to old posts in lieu of fresh content - mindful that the above barely counts - but given its relative antiquity and the distraction of my digestive issues I thought to do so regardless. It is a guest post I wrote on Cafleurebon ten years ago this month about the wedding of Prince William to Catherine Middleton. I see I mention Prince Philip right at the end, which is topical at least. In my mind I am sure I included more of a story about him, possibly even involving a joke of his, but it seems to have gone. There was a fair bit of editorial tweaking after submission, so maybe that bit ended up on the cutting room floor. I also note that William and Kate are still married, despite the bookmakers betting generous sums to the contrary!
Please excuse the distracting profusion of fonts in that post - nothing to do with me, hehe.
I will close with a bit of graffiti I spied the other night, which nicely sums up my current health puzzle... 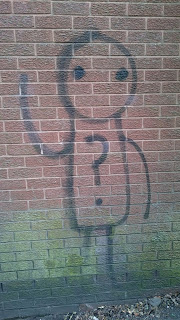 Have you had any odd side effects from the vaccine? (AZ / other?)
Have you ever had to eat a challenging diet, and if so how did you get on?