Mojo, Maja, Portia, and her Magicka: a spooky tale of Airbnb and Australian perfume junkies

I feel it behoves me to mention again! that despite all appearances to the contrary I am not dead, under a rock, AWOL or lacking in mojo. Such mojo as I have has simply been channelled into a host of domestic projects on both sides of the Channel, work, cat feeding for a friend, and the now regular thread of Airbnb guests - or 'paying guests' in more generic terms rather, as they are not necessarily on that footing. I have recently also learnt the term 'fractional renter', which perfectly describes my current long stay chap, who is here three nights a week.

But it is Airbnb itself which is the trigger for this tale...When I first decided to launch myself into this sideline because my usual work was slack, Portia of Australian Perfume Junkies was very supportive, with helpful suggestions about how to maximise the appeal of my listing through more professional-looking photographs. More of Portia anon, but for now cue the other P, whose name also ends in '-ia', as it happens. For no sooner had my fractional renter left for the week than the latest Airbnb visitor arrived, a lady in her early 70s called P from northern New South Wales. I warmed to her the moment I opened the door, despite being weary beyond anything after a three day headache and sickness bug which had only just lifted(!). And despite the fact that she turned up unannounced an hour ahead of the earliest check in time, haha, and found me looking dishevelled, Hoover in hand, cable trailing all the way up the stairs. I couldn't believe that P was in her 70s, and said I had instantly assumed she was about my age. She replied that she had instantly thought I looked the same age as her younger sister - early 50s (I don't!) - so you can tell that that exchange, however removed from reality, endeared us each to the other right off the bat. ;)

P is originally from England, but moved to Australia when she was seven, in a neat parallel to my mother, who was born in Australia, but moved to England at the age of eight. Unlike my mum, P did not stay put in her adopted country, and was visiting an old colleague from her army days, in a district the other side of town. I spent a good 20 minutes looking round the house in vain for OS or other town maps at a reasonable resolution, then trying to print out walking maps that were legible on my feeble printer, before finally giving up and saying: 'Why don't I just take you there? That would be a lot easier!', and off we went. But because I was too lazy to fire up the Satnav for a journey in my own town, and had not enlarged the Google map on my phone sufficiently to include all the street names of different sections of roads, I ended up dropping P off in Witney rather than Woodstock Road(!), meaning that the much anticipated reunion with her old chum from 40 years ago got off to a puzzling start. P was very decent about my mistake, and cheerfully walked the remaining 100 yards or so to the proper address. And we were at least still in Oxfordshire...

Some five hours later, P was back (in a cab!), had posted a letter for me and picked up a fish supper, the chips from which she kindly shared. At some point in the conversation she mentioned right out of left field that people often stop her and ask what perfume she is wearing. Which was interesting, as I had indeed clocked her perfume on the landing (going one step beyond the sillage from guests' toiletries, you will note!), and had been going to ask her about that unprompted. It was even funnier when P said she couldn't actually recall what she was wearing that day! But we went on to discuss her dozen-strong collection - or the ones she could remember...;) We are still both puzzling over what bottle of hers is in a purple box (Google images didn't come up trumps despite concerted scrolling, I should add).

Of the fragrances P could remember owning - though some were running low to empty - vintage Coty L'Aimant was one, also a Spanish scent she thought was called 'Magicka', which had a lady flamenco dancer in a black and red dress on the packaging. 'Oooh', I said, 'I have some vintage L'Aimant in the cupboard under the stairs, and I do have a Spanish scent called Maja?' Cue a good hour of diving into my three plastic crates of older perfumes, mostly the bounty from my friend Clare's late MIL's collection. The L'Aimant was instantly rehomed with P, and a quick search on the Net confirmed that earlier versions of Maja did indeed have the 'magicka' lady on them, so that went to P as well, along with nostalgic bottles (for her) of Lentheric Elle and Mystique, released a couple of years apart at the turn of the 80s. I felt I had really landed on my feet to find someone who truly appreciated these 'period perfumes', which I would probably never have got out again left to my own devices.

And so to bed...The next morning we sat at the dining room table again over a cup of tea, swapping notes on places we knew in Australia - for I spent a month in NSW some 25 years ago. The stuffed koala in the guest bedroom, named after the Sydney suburb of Mosman, had not escaped P's notice. Then I was just explaining how I was once chased by a kangaroo in Jarvis Bay when there was the sound of a small thud on the hall floor. A pink package had landed....from Portia of Australian Perfume Junkies! How uncannily timely was that on all three accounts of Airbnb, Oz, and matters olfactory. I wasn't remotely expecting to hear from Portia - it was one of those out of the blue RAOKs people in the perfume community spring on one another from time to time. So before I took P to her bus stop for the next leg of her UK visit, we eagerly opened the package to reveal a dear little purse from Mongolia, and some perfume samples. The purse was a particularly apt gift, as Portia had remembered I collect them, and that they had even featured in a blog post! 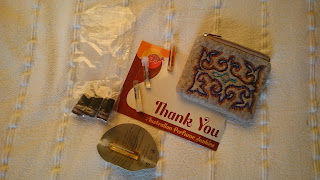 The timing was so spooky it was truly Twilight Zone-y. I had already spoken of Portia to P during our sniffing session, and now here was a little pouch of scents from Sydney popping through the letter box right before she set off. Five minutes later, and the magicka moment would have been missed.

Perfect timing, Portia! 'Thank me'?? Thanks so much to you rather, and to P....ia, for putting an antipodean pep in my perfumed step!