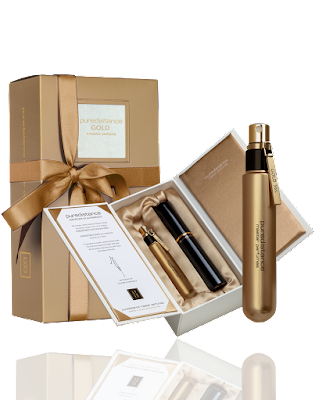 Or should that be "Karess"? Maybe not, as the word looks too far removed from its original spelling and meaning to be recognisable. Actually, a number of possible titles sprung to my mind for this post, unusually for me, including "Opulent Skin Scent" and "Molten Luxury". I could perhaps park this "not really a review, as my posts never are these days" right there, because those three images sum up most of what I have to say about GOLD, but readers don't get off that lightly, so I shall meander on regardless...!

Yes, a parcel from Puredistance arrived the other day, as I was right in the midst of a distressing multi-lateral mouse infestation. The "errant varmint" (as I would call them if I were American) laid waste to my best, most expensive - and previously pristine - sofa, along with a Welsh dresser, which is only mine on a long loan basis. When I say "laid waste", that is a literal definition of what occurred, accompanied by a frenzied side of cushion and quilted throw chewing. So the arrival of the parcel, with its gold-themed contents, cheered me up considerably - and this long before I opened the box.

Puredistance packaging is very nicely coordinated, such that I was happy to contemplate the ribbonry - ribbonage? - for a whole evening before steeling myself to (irrevocably) undo the bow and broach the box within. I love a good ribbon, and made a mental note to repurpose it in one of my knitted hot water bottle covers. I even have some matching old gold yarn ready to roll.

But eventually the following day my curiosity got the better of me and I opened the box, to reprise the famous line in 'Take your Pick', that hoary old game show of yore. The test tube 'bottles' come in burnished metal these days, and have a little bicycle clip round the neck. I am not quite sure of its function - maybe to forestall leakage - nothing to do with keeping trousers away from chains, obviously.

The people at Puredistance had enclosed a pack of postcards covering different aspects of the background to the fragrance. The image below on one of the cards illustrates the artistic idea for GOLD, namely to recreate in olfactory terms multi-tonal gold blocks in the style of a Mondrian painting - or Mondriaan with an extra 'a' if you are Dutch, and they are.

"Antoine Lie created GOLD to finish a trilogy showcasing the 3 signature Puredistance colours using incredibly high quality ingredients. The visual inspiration for GOLD has been the 'Metallized Mondriaan' above (created by Mr Vos). Chic shades of gold - varying in intensity and warmth - are harmoniously laid out in a well balanced pattern." 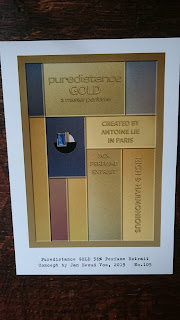 Here are the notes - I have omitted whether each one is essence or absolute etc, but the ingredients are pretty sumptuous all right.


Two thoughts about this - well, three, when I get to it - namely that I have an odd link with Mondriaan and The Netherlands: In 2002 I had occasion to go to Dordrecht, an underrated town on the coast, to interview a chemicals company about I know not what now. The meeting was held in a big office, on the white wall of which was an enormous Mondriaan painting - well, not an original I assume - in those typical striking shades of red, blue and white, with a hint of yellow, and black borders in between the blocks of colour. The memory has stayed with me ever since. It was long before I 'found' fragrance, and I little knew at the time that one day I would be sampling a Dutch scent inspired by the painter - and loving it...

Secondly, it occurred to me that that multi-tonal assembly of blocks is reminiscent of a bronzer palette, a make up item with which I have never engaged. Maybe even one to do with contouring, a technique about which I am on even shakier ground! But you know what I mean. I have an Estee Lauder capsule weekend makeup palette somewhere and it also illustrates the point, albeit in less metallic / goldy terms. 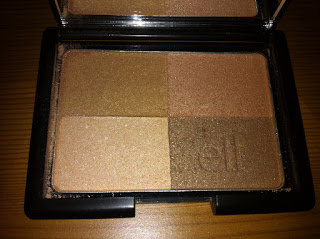 So that was that...I already liked the premise of the scent before I sniffed it. And when I did I was not disappointed. Long term readers may recall my post about Apres L'Ondee and Virginia Woolf, in which I mention how a review by journalist Hannah Betts was a major trigger for my falling down the rabbit hole.

"I also experienced 'sudden onset perfume mania', but for me it was not so much a fragrance which triggered this epiphany, as a review of a fragrance, namely Hannah Betts’ 2005 article for The Times on 'glacial perfumes'.  She starts by quoting former French Vogue editor Joan Juliet Buck’s comment about her heightened emotional response to narcissus absolute.

'Just a drop on each wrist and two in the bath were enough to send silver running down the walls. It set the world throbbing out of control when I wore it. I became a little weird.'

Betts point outs that the sense of silver trickling down bathroom walls is all the more pronounced if the perfume already smells of silver – 'then walls course all the sooner'.  This leads her neatly into a discussion of her own favourite cool, metallic scents, namely Après L’Ondée and Hiris by Hermès, and how this effect is created by the use of orris butter, one of the most expensive perfumery materials of all, a creamy paste derived from the iris root." 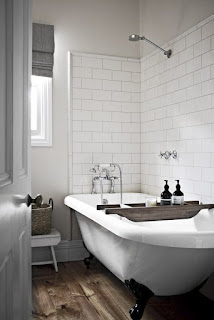 I refer back to that pivotal moment in my hobby, for it struck me that Puredistance GOLD could be the gold equivalent! There may just be a clue in the perfume's name...;) It is warm to silver's cold, but stops well short of hot. Call it the power of semantic suggestion, but when I first sprayed GOLD, I had a sense of liquid slowly creeping across my skin in a soothing way, as though my skin were being dipped in fine gold leaf. And there it sat, the ultimate skin scent, with a very subtle opulence to it, though as ever I find it awfully hard to describe. I can say that when I first sniffed GOLD, an image popped into my head of the love child of Opardu and Sheiduna, but I don't want to imply too much by that - only to report that it happened(!). Though there is a fair bit of crossover notewise with Sheiduna, I see (7-8 notes, even), while GOLD and Opardu both feature jasmine. I may be clutching at straws there, admittedly.

GOLD is a smooth, silky, ever so slightly sweet oriental. There is not a hint of resinous fuzz, or only the faintest murmur at the outset, despite the several basenotes that can read that way: myrrh, benzoin etc. Sheiduna is definitely more overtly fuzzy in that regard. I have quite a high tolerance for fuzzy notes in fact, though some of the Tauers can be a bit scratchy. But in any case, GOLD soon subsides into the silky - and slinky - concoction mentioned above. It feels luxurious in a 'barely there' kind of way. As with Bengale Rouge and Papillon Perfumes, this latest release is my standout favourite of the line, and I speak as someone still fiercely attached to Puredistance1.

Then it occurred to me that I could have posted about GOLD in my 'Careful Whispers' series - whatever happened to that? It seems to have stalled in 2014! But I see that one of the scents included was Penhaligon's Iris Prima. GOLD has a bit of the vibe of that scent too, but with more oriental notes and overall oomph. A skin scent with 'lo-fi welly' if you will, which I know sounds paradoxical, as does 'opulent' in this context, come to think of it, conjuring up a grander, more unctuous production as a rule. But nevertheless GOLD really does manage to be both.

And finally, a word on Karats...18K tends to be the standard for jewellery, as it has a percentage of alloys that increase the metal's strength. By contrast 24K is the purest grade, but is not considered robust enough.

However the purer 24K is perfectly suitable to spray in perfume form(!). And there's a clue in the brand name too...
Posted by Vanessa at 14:33 11 comments: