"Bleak since I was ten", and a whiff of murder: The Perfume Killer by Linda Hagan mini-review 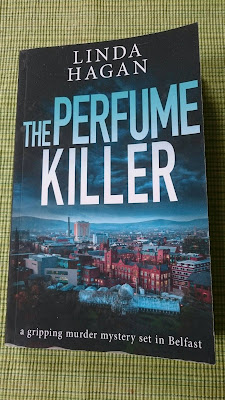 Sorry for the long hiatus between posts...I have been feeling rather "off" and existentially rattled lately, owing to the traumatic events in you-know-where, though there may be a glimmer of hope in the talks in Turkey today...?

Something unexpected did happen recently which cheered me up though...ex-Mr Bonkers was having a big clear out of travel books and B & B, hotel and pub guides, some of them from as far back as 1987, which I will have used on holidays and work trips. I took them all home with me, though they are hopelessly out of date, for I can't bear to throw a book away and no charity shop is likely to want them. In amongst the pile was an old school magazine of mine from 1971, which I was curious to see again after 50+ years. There was a photo of me in The Gondoliers and a poem about the Pakistan Tidal Wave for which I had won a prize sponsored by the UNO (to mark 25 years since the founding of the League of Nations). How quaint that name sounds now. It was rather a depressing poem - with a lot more mud where that came from! - and I will only quote some of it, to give you the idea: 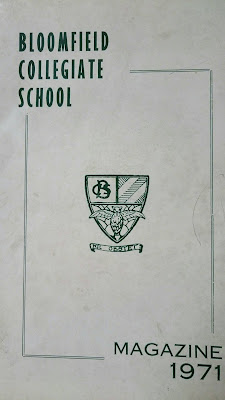 "Alone on a delta
Surrounded by rotting carcasses and human skeletons;
Faced with the problems of starvation,
A small Indian boy,
Crawling like a fly on the face of the earth;
Lost and homeless, eating mud,
He gnaws the bones of his friend
To keep alive" 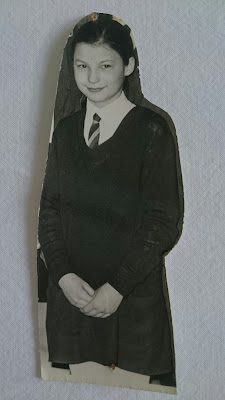 But more memorable even than the magazine is this poem that fell out, which I wrote in the final year of primary school.
It is nigh on illegible, yet I can just make the words out. 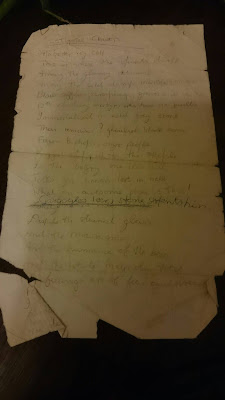 Cathedral Cloisters
Alabaster icy cell
This is where the spirits dwell
Among the gloomy catacombs
Among the cold damp marble tombs
Black coffins, sarcophagi, graves and vaults
12th century martyrs who had no faults
Immortalised in cold grey stone
Their remains? Ghoulish black bone
Frozen bishops, onyx people
Rugged steps up to the steeple
In the belfry one iron bell
Tolls for sinners lost in hell
What an awesome place is this!
Gargoyles leer, stone serpents hiss
Despite the stained glass
And the mown grass
And the humming of the bees
And the white magnolia trees
My feelings are of fear and dread
For
I can
almost
hear
the dead
Ex-Mr Bonkers said: "Well, I know how much you love all those 'forensic prostitute' programmes on TV and thrillers with 'Bones' in the title, and this just proves that you have been bleak since you were 10!"
And my lock screen on this netbook is a sarcophagus, as it happens - of one of our landed gentry in a local church (St Mary's, Ingestre). 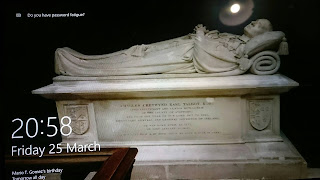 So, having set the scene of me being a person with a fascination for the darker side of life, it is time to talk about the book I have just finished and greatly enjoyed, namely "The Perfume Killer" by Linda Hagan. This novel, written during the pandemic, could not be more tailored to my interests: set in my home city of Belfast, with my alma mater of Queen's University featured on the cover and many of the locations in the book well-trodden haunts from my student and schooldays, it is a gripping murder mystery with a multi-faceted perfume theme. For starters, part of the killer's signature is to leave the stopper from an empty perfume bottle by the body of the victim, which happens to be that of a scent also worn by the female Chief Inspector (and lead character) investigating the case. All we know is that it is a fragrance by Gucci, and that it is "unusual" and not particularly new. Well, that is half a story if you ask me, and sent me scurrying to Basenotes to identify older scents it could possibly be. I am thinking it might possibly be Gucci by Gucci edp, of which I have a decant myself. Gucci III or L'Arte di Gucci are much older, but I can't see the female lead wearing either of those earlier fragrances, as she is not that old herself.
There again the bottle itself doesn't sound like anything by Gucci - here is one of the police team who tracked it down:
"It's French and expensive. The bottles are in the shape of a cat and the stopper is the cat's head complete with ears."
Yet elsewhere the bottle to which the stopper belongs is described as "heavy" and "blue".

To add to the confusion - and cast the whiffy net of suspicion more widely - there are two characters in the book who collect artworks featuring perfume bottles (one a witness and one the slightly creepy pathologist on the case!) - while the pathologist also owns a sizeable collection of old perfume bottles, which he keeps in his office, including a heavy blue one that matches the one whose stopper was left at the crime scene.
So there is another mystery within a mystery that remains unsolved...never mind who the murderer is, what is the blinking perfume - and what bottle is it in?!
I shan't give anymore away, but for any perfumistas who live in Norn Iron (and I can think of at least two of my acquaintance) it is a must read, though I would recommend it to any fan of crime novels. Reading between the lines the main character may even have gone to my school, and the aforementioned witness to my brother's school nearby, though neither are named.
The author, Linda Hagan, is in her early 70s and only took to writing fiction relatively late in life after a career in education and academia, which as a would-be writer myself I find encouraging(!). She lives in the seaside town of Carrickfergus, with its imposing Norman castle. The area features prominently in the action of the book, and I also had an incident there as a small child. We had gone to see the castle on a train as a treat for me on the occasion of my fifth birthday, but the outing ended badly when I took a bite out of a glass of Fanta in a cafe on the quay.

What perfume-themed books have you enjoyed, other than guides / directories etc?
Here is my list below (in no particular order, and with links to my reviews - am not including Chanel: An Intimate Life by Lisa Chaney as I didn't enjoy it and didn't finish it!):
Damage Control by Denise Hamilton
The Perfume Collector by Kathleen Tessarro
Coming to my Senses by Alyssa Harad
Perfume, The Story of a Murderer by Patrick Süskind (so obviously that I never reviewed it!)
The Perfume Lover by Denyse Beaulieu
The Scent of Possibility by Sarah McCartney
Musc by Percy Kemp
The Rottweiler by Ruth Rendell
Posted by Vanessa at 16:16 1 comment: