Bitesized Not Quite Reviews Of Perfume-Themed Books: No 3 - Damage Control by Denise Hamilton

If anyone out there is contemplating a career in Public Relations, they may well wish to reconsider after reading this book. Or certainly reconsider accepting a job putting a favourable spin on the lurid shenanigans and dodgy dealings of LA's great and good. Or great and bad, more like. 'Bad, mad and dangerous to know' indeed, to reprise Lady Caroline Lamb's astute assessment of Lord Byron. 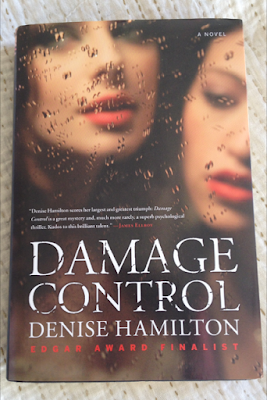 Damage Control is a psychological thriller combined with a well observed social commentary on the privileged and intractably amoral West Coast elite. The book's plucky heroine, crisis management professional Maggie Silver - who pops a cocktail of amphetamines in a bid to stay awake 21 hours a day in the execution of her job, in the course of which she is nearly executed herself on more than one occasion - is a latter day Jane Bond. Indeed, she has days which make James Bond look like a pen pusher in a building society by comparison. But I am running a little bit ahead of myself, much like the page turning, cliff hanger-bristling plot of the book itself, which manages to combine the breathtaking twists and turns of its narrative with a languid and lyrical evocation of the surf-tossed coastal landscape of Southern California. In that regard I am vividly reminded of the book White Oleander by Janet Fitch, and Maggie is well versed in the local flora, as it happens. Denise Hamilton also captures that edgy, 'city that never sleeps' feel to LA. I have been there a few times, invariably staying somewhere not overly salubrious, and the sense of danger in the sultry night air is palpable.

But in what way perfume-themed, I hear you ask? Well, I suppose it would be more correct to say that Damage Control is perfume-inflected. To backtrack a bit, author Denise Hamilton is an LA-based writer, journalist and blogger, and has a perfume column in the Los Angeles Times, or did up to 2013 at least. And because she is a fumehead and 'one of us', she imbues her protagonist with a similar love of perfume. On and off through the novel Maggie will comment on her scent of the day and bottles spied on other people's dressing tables. She will score a long discontinued perfume in a thrift store, foist unsolicited decants on friends in a bid to cheer them up and/or broaden their horizons, and notice ambient smells generally.

"At a traffic light, I smelled carne asada juices dripping onto hot coals, the toxic bite of lighter fluid exploding against a match."

My favourite line in the book - and this isn't a spoiler - has to be Maggie's upbeat comment:

Moreover, a particular bottle of perfume does in fact serve as a material clue in the unravelling of the plot, but I will draw a fragrant veil over that.

Now I abandoned the last perfume-themed book I didn't quite review - Chanel: An Intimate Life by Lisa Chaney - part way through, something I haven't done since I chucked a particularly impenetrable Henry James into a rubbish bin in Swindon. By contrast, I was completely swept along by Damage Control, rooting for the heroine to strip back the dizzyingly complex layers of intrigue and double dealing and work out who if any the good guys are that she can trust - also within the company she works for!

Luckily justice prevails, and the multiple pile up of damage broadly controlled, but the reader is quite exhausted by the time the nerve-racking denouement finally comes. And what I have learnt about the PR profession is that even a daily drenching in your most fortifying 'scent as armour' will not cut it, and you may need to top up with caffeine and stimulants of every stripe to get the job done.

And finally here I am, looking worryingly starry-eyed in my first ever branch of Starbucks in LA's Westwood district (in 1994). I am about to get my first fix of caffeine of the day, albeit from my beverage of choice, English Breakfast tea (or its nearest approximation). 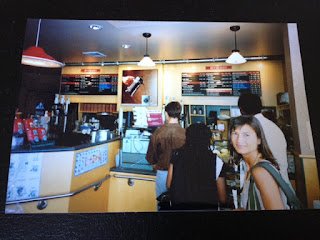 "I must be okay, if I can smell Chanel Sycomore." has to be the best perfume related line in a book ever! I think I should adopt something similar as my personal moto. Maybe with Vol de Nuit instead of Sycomore :)

LA is an odd place. Rather disjointed. No atmosphere in the day and then seedy at night. I'd like to go back and stay in the Chateau Marmont though.

I read The Picture of Dorian Gray recently and was surprised to find Dorian studied perfumery for a time. That and other passages make me suspect Oscar was one of us too.

Now you can start Eleanor O which I am DYING for you to read.

The line ‘X is one of us’ always recalls Eccles’ rejoinder ‘Which one of us is he?’

Isn't it a cracking line? It would make a great motto for you with VdN in it.

I quite agree with your take on LA. Very sprawly and you really need a car, though I do remember that on that 1994 trip my then BF (who was living out there for the summer) and I biked a lot of places, including Beverly Hills. We did loiter outside a luxury hotel, but I can't recall if it was that one. Far too sweaty and scruffy to have gone in, mind.

I have read 60 pages of Eleanor O and it is as amusing as it is broadsiding and chilling. She talks exactly like my father for one thing!

That would be good news about old Oscar. ;)

Haha! I had to look that up, but I think he is probably a Goon Show character, not the cake.

Oh my goodness, she talks like your father?! Could that somehow be why I was thinking of you the whole time I was reading it? 😀 It's so funny and so tragic. Please update me as you go along on Messenger if you have the time.

Yep, 'comestibles' instead of food, 'condiments' instead of 'salt and pepper'. Things I bought with my pocket money were 'fripperies'. He also would not have recognised a mug with Jeremy Clarkson on it, and so much more besides...

Got it. Fantastic. Oh the mug bit was brilliant.

I enjoyed this article/review very much especially as I am a Chanel Sycomore fan, you know too that she means the now discontinued EDT and not the new, much inferior EDP!!
I have never been to LA but enjoy seeing it as the setting of 'Lucifer' (with Brit Tom Ellis in the lead role) which I highly recommend (Amazon Prime).
All the best, Helen

I’ve been to LA just once and didn’t like it at all. Of course, it was many years ago, and we were staying in the questionable area, and I still can’t believe it but we failed to find “walkable” download (I’m not sure if they have any).

The topic of the book doesn’t appeal to me but I still might try reading it - because perfumes ;)

I did not know that there is only an EDP version of Sycomore and that it is inferior, so thanks for the heads up!

Lucifer sounds like a good watch. I remember being a huge fan of the Hill Street Blues in the 80s. Colleagues likened me to the role played by Veronica Hamel, and it is so long ago now that I cannot remember if this was a good or a bad thing!

It is such a sprawling and edgy place I am not surprised you didn't take to LA. I would hate to live there, for so many more reasons indeed. A 'walkable' download for LA does strike me as a contradiction in terms.

I have just read another book - Tara and Val are also fans - called 'Eleanor Oliphant is Completely Fine'. Very minimal perfume mentions but it is an absolute tour de force and the character of Eleanor a complete one off.

... especially since it was supposed to be "walkable downtown" - I hate mobile auto-corrects! :)