The other day I had a much needed haircut, and my hairdresser happened to mention that she had received a bottle of Givenchy's Very Irrésistible (sorry, I prefer it without the accent) from her husband for her birthday. She went on to say that she tries to hoover up any bottles she sees as it is her favourite scent and has been discontinued. I took a look on the Internet just now to confirm that this is in fact the case, and stumbled upon a thread on Basenotes where people were speculating on the reason why the fragrance got the chop. Some wag had written: 'Because it was resistible.' Well, I can't comment on the appeal or otherwise of this particular perfume, as I haven't tried it, but hearing the name again reminded me of an amusing conversation with Andy, the bass player in The Monochrome Set when we were on tour one time. With his deadpan tone belied by a mischievous twinkle in his eye, he remarked that the concept of using adjectives as fragrance names had a lot of untapped potential, instantly illustrating his point with the corker, 'Incorrigible'. He also thought of 'Remorse', the application scenarios for which had my imagination running riot, though 'Remorse' is of course technically a whole other noun naming route...

When I tried thinking of all the other well-known fragrance names based on adjectives, I could only come up with Schiaparelli Shocking and SJP Lovely, though there are many more of them, I know!

So I decided to take up Andy's baton and turned my mind instead to thinking up a few more adjectival names myself, that in some way capture the scent in question, even if they are most unlikely to get through the focus group stage(!).


INELUCTABLE: another name for Very Irresistible if it ever stages a come back.

INDIGENT: for a budget perfume that aspires to punch above its price tag with an obscurely impactful name.

BOMBASTIC: so many big production 'kitchen sink' fragrances deserve this epithet - let's call a spade a spade at last!

ETIOLATED: a descriptor that doesn't get out much and evokes a whole swathe of pale and uninteresting, insipid scents.

AVUNCULAR: for the next one of those 'in the library' pipe smoke and leather-type frags?

REBARBATIVE: one of those Marmite / controversial / Emperor's new clothes perfumes that people admire for their avant-garde smell of photocopier toner or whatever, but which are frankly repellent.

Come to think of it, 'Repellent' might be another contender for a citronella-forward fragrance. ;)

REGURGITATED: perfect for a tiresome flanker? OR for a rich oriental featuring a generous lump of ambergris.

PERVASIVE: similar to the above, but with the added nuance of strong sillage. (Very similar in style to 'INSIDIOUS' and 'TENACIOUS'.)

RISIBLE: a good all-rounder of a name that is perfectly in tune with the olfactory Zeitgeist.

MORDANT: one of those spiky, galbanum-heavy compositions with a bonus Hogwarts vibe.

INVIDIOUS: this one manages to be full of vim, verve, and chutzpah, while actually meaning 'obnoxious'. (Not to be confused with 'INSIDIOUS' above.)

HUBRISTIC: one for the high end 'fur coat and no knicker' niche set (embellished with Swarowski crystals, why don't we?)

EQUANIMOUS: calm, composed, like the urbane metrosexual for whom it is intended.

MIASMIC: not a criticism of J-Lo's Miami Glow, which is quite a nice beachy scent, apparently.


So please now hit me up with reminders of existing adjectival perfumes, or some more suggestions of promising names!

Ghost sanctuary: aka 'What do you do with your empties?'

Back in January, I wrote a post about the pleasant sillage of toiletries left behind by my Airbnb guests. In the comments that followed, a lively discussion ensued about the phenomenon of 'scent ghosts', both in this sense of sillage left behind in rooms after people have left, OR the scent of ghosts proper. Here is reader Jillie, who has personal experience of such olfactory apparitions:

"...there are other "ghost" smells, ie perfumes that actual supernatural spirits release into the air...we lived in a very haunted house when I was a child, and every so often there would be an overwhelming fragrance of lily of the valley wafting through the rooms."

Then reader Crikey came up with another variant - a vestige of a scent tenaciously clinging onto something, that is so spookily old as to pretty much qualify as a ghost:

"But I think that very old houses do hold traces of the lives lived in them. I once visited a bronze age archaeological site in Syria, they were still working down through the layers. The earth bricks in one room in the palace still had a faint trace of the scent of oranges - scented oil had been worked in as it was built. Four thousand years ago."


This talk of scented spectres got me thinking of my own collection of empty decants. If you stick your nose directly on the nozzle you can still just about make out a faint remnant of the perfume they once contained. In the past I used to chuck decants when I had finished them - or when they had merely evaporated or leaked while my back was turned! - but now I consciously keep my empties. They live in a shoe box, nestling amongst the folds of an old silk scarf (for no good reason other than that the scarf got there first).

The Travalos are the most problematic item, as they are such intrinsically attractive receptacles that I would never stick a label on them. As a result the only way of determining what used to be in them is my rather inadequate nose. I can't even remember by association - 'Meharees is in the red one', say - because I have two red Travalos. I do still have a fighting chance of knowing which is Meharees if the other red one had contained a heady neroli scent, but I am not always that organised, and have previous for putting two perfumes that are remarkably alike in Travalos of the same colour.

And though my system has flaws, one of the reasons I keep these scent ghosts is for reference purposes. This is especially the case if the fragrance in question has been discontinued, like L'Artisan Parfumeur's Safran Troublant or Damien Bash Lucifer #3. Another reason is sheer nostalgia! That's quite a biggie, actually. 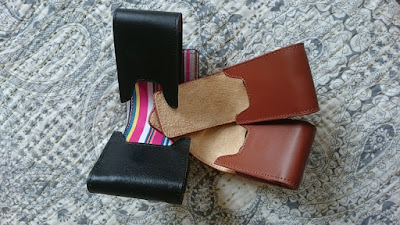 While we are on the subject, just as the collective noun for ghosts turns out to be the very wonderful 'fraid', there should perhaps be a collective noun for 'an assortment of out of service Travalo holders'. This unfortunate situation was of course brought about by the fact that the Travalos they once housed have all come to the end of their natural life, not being ones that were filled in the first place from bottles in my collection. And I do have Travalos which fall into that category, however I also owned enough I had bought or which were given to me to fill the three empty leather holders you see forlornly displayed above. Oh, and the topping up gesture would only work if I knew what was in the blessed thing in the first place, which is moot.

So that is the third reason I might be inclined to keep an empty decant...in case I came by more of a fragrance one day. The act of throwing decants away says to me: 'I will never smell that scent again', which feels too definitive and brutal somehow. I am more your 'never say never' kind of perfumista. I should perhaps add that I do routinely throw away small glass 1ml vials, as they are a fiddle to refill even if the opportunity arose. So my 'ghost sanctuary' comprises decants only. It is growing, but at a glacial pace, for the obvious reason that 'thunking' is a rare event in the life of an average perfumista like me with more scent than sense...;)


Do you keep empty decants, and if so, why?