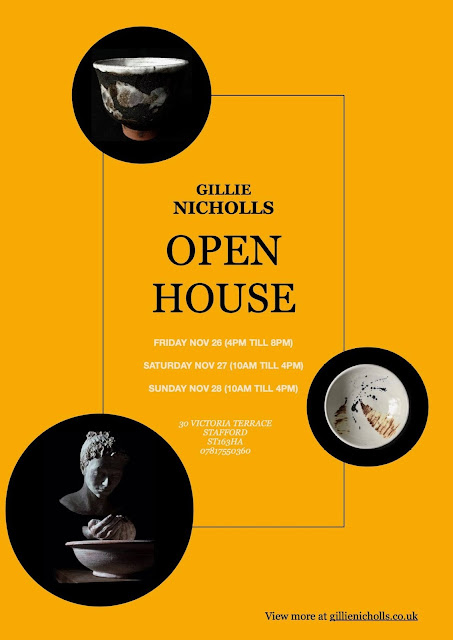 This is an even more off-topic post than usual, which is saying something, but on the off-chance that this might reach anyone who might be interested and live within striking distance of Stafford, I wanted to mention an upcoming "Black Friday (Weekend)" event. For my good friend Gillie Nicholls (singer, songwriter, potter and sculptor) is holding an Open House from Friday to Sunday of this week. She will be selling a wide selection of her hand thrown pottery, and I will be peddling my knitted wares. The weather is getting colder, so their time has come!, plus they also would make ideal Christmas presents. The details are in the poster, but in case they are a bit small to read, here they are again: 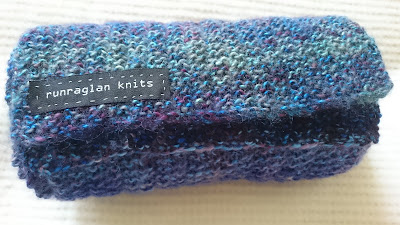 By way of further enticement, there will be tea and coffee and homemade treats. ;) After the long gloom of the pandemic, the weekend will also be a welcome opportunity to catch up with friends and neighbours - or any perfumistas out there who'd like to come along and say hello!

There are more examples of Gillie's work on her website, (including her sculpture of my head), while further photos of my knitted items may be found on my Runraglan Knits Facebook page.

MAC Pro Palette Eyeshadow: It's Satin Taupe, but is it really green?


People who know me well will tell you that I have a hard time making decisions. A classic example of this is in a restaurant, where I will be overwhelmed by option anxiety and feel compelled to ask at least one question of the wait staff. This is to ensure I know exactly what I am ordering, and to pre-empt the feeling of "diner's remorse" that inevitably comes from eyeing "the dish not taken" that your friend ordered instead (to come over all Robert Frost for a moment). Last Saturday, at a meal in a primarily pizza restaurant, my question concerned the presence of raw onion, which I feared might be found nestling surreptitiously in a mound of Puy lentils in the salad I was considering - but was assured to the contrary. As I may have said before, I have even been known to inquire what exactly "Mushrooms on Toast" consists of, to be greeted by a blank look from the waitress and the laconic response: "Mushrooms and two bits of toast".

But in complete contrast to my usual MO of dithering and doubt, if someone were to ask me what colour eyeshadow I was going to buy next, I would have no problems at all defaulting to my favourite shade of all time, MAC Frost Satin Taupe. (See how I managed to sneak in another frost reference? We had some on the ground today, as it happens.) Satin Taupe was also a staple of the late, great blogger The Non-Blonde, and would be my desert island eyeshadow in the unlikely event of ever being forced to restrict myself to one. Even given unlimited choice, I probably wouldn't wish to own more than four shades: a taupe, grey, green and mauve would cover it. That is such a rare phenomenon for me with a beauty category, when you think how promiscuous I have been with perfume and lipsticks, and even skincare.

I was prompted to rebuy my beloved MAC eyeshadow owing to a recent bout of eye eczema, that I thought might have been triggered by either the eyeshadow or several possible mascaras being a bit long in the tooth, to be polite about it. Though it is so hard to know, as there are frankly irritants at every turn. Plus I am known for really pushing the envelope when it comes to using make up and toiletries generally well beyond their use by dates, which may not be doing me any favours.

So I went searching for a replacement online - not living anywhere near a MAC store - and landed on the website of Selfridge's, which offered to deliver for the princely sum of a fiver. And the exact product I lit upon was called "Pro Palette", which didn't compute with me, but the photograph showed a traditional eyeshadow pot just like the one I had, so I wasn't unduly concerned. But alongside the pot it also showed a picture of a flat square card form of packaging with a hole in it, which was puzzling, much like the name. The cost was £10, a bit less than I expected to pay, but of course the delivery bumped it up to £15.

Interestingly, I have just performed the identical search in Bing and cannot fetch up the particular combination of images I just described, but I swear that is what I saw right before I clicked on "Buy". So you can imagine my surprise when what arrived was a very shallow disk inside this little square card - not unlike the presentation of Serge Lutens wax perfumes if anyone remembers those? It quickly dawned on me that I had in fact bought some kind of refill, not a new pot after all - but a refill for what?? I thoroughly examined my existing pot and couldn't see an easy way to relase the old pan and insert the new. There was no button to press or catch to release, for example(!), so it was not at all obvious how I would get the old suspect one out to replace with my hygienic new purchase. But there was also no practical way I could use this little sliver of an eyeshadow in its loose state - it was about the size and thickness of an old florin.

There was nothing for it but to get out my trusty little penknife - won in a particularly high end kind of cracker, and now about to have its moment - and prise the darn thing out. It did eventually shift, so I gave the plastic housing a good wash and slipped the refill in with no further problems. Having carried out a new Internet search out of interest, I see you can mix and match these little pan refills and place them in a new black plastic palette you buy separately for this very purpose. Who knew? It certainly wasn't clear based on the search that I made that the refill was NOT intended to go in the old style single shade round pot. And hey, I actually thought I was buying the pot in the first place!

The penny also dropped that this move towards supplying refills will have been prompted by a desire to save on packaging on environmental grounds. All very commendable. Which explains why I was most surprised to learn that this slip of a product had been delivered in my absence to a neighbour. Why ever would it not have fitted through my letter box? This is why...and there was even more paper wadding than pictured - of the stretchy white concertina variety. Oh Selfridge's, how absurd is that?! They may think they have to justify their £5 delivery charge by putting the little card in the biggest box they need to to trigger a higher postal charge. When it would of course fit into a slim Jiffy bag / large letter at the very worst. So a big black mark to the store for their choice of box, notwithstanding its fetching yellow insides, for this all but undoes the good work of MAC with its refills. 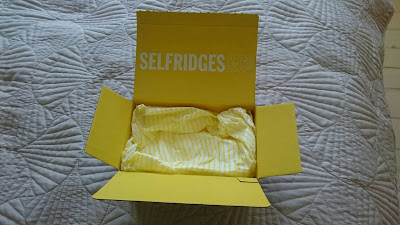 Long term readers may recall that I have included this very issue of "bombastically big boxes" in my Scent Crimes series in relation to perfume packages, but it does of course apply to any kind of product.

But anyway, despite the confusion and extensive washing and knife work involved, topped off by disappointment at the disproportionate amount of packaging, I am still very glad to be reunited with good old Satin Taupe in a new condition that shouldn't trigger my eczema. And I was wearing it in fact at the weekend, at the restaurant where I inquired about the onion...

If you could only have one eyeshadow, what would it be?