My friends on Facebook will recall that my Elderly Friend has a time-honoured tradition of pressing a random selection of gifts on me just as I am about to leave. The other day she added a new twist to this custom, by giving me a large slice of M & S Apricot Roll (highly recommended if you do not eschew sugar and/or ultra processed cake) and a pair of old curtains for me *to dispose of*. She recently gave up driving, so is more constrained in terms of carrying things into town to a charity shop, for example. I mentioned that there was a textile recycling container at the tip, and that I would take the curtains there, together with a motley collection of other items earmarked for recycling, from three bits of sawn off downpipe to an outsized cardboard box, a couple of beaten up plastic drawers that used to hold cassettes, a black bin bag full of said cassettes(!), a mouldy old blanket which proved to be the "canary in the boot" that signalled a leak beneath the spare tyre, and some broken fairy lights.

Having got rid of everything in its appropriate receptacle, I returned to my car, noticing as I did so that someone had shoved a load of books in the paper bank reserved for things like old telephone directories, junk mail and magazines. I had a little rootle around and rescued four of the misplaced titles, including a hardback by Compton Mackenzie called The Red Tapeworm with an interesting dustjacket - a third edition from 1955! (Which looks like it might even be worth something...or more than the nothing I paid for it, certainly.) Hmm, I see it is a satire on the economic measures imposed by the UK Government in wartime, so it might be hauntingly topical as well. 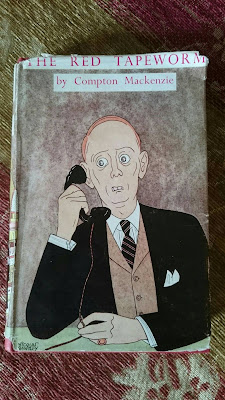 Now next door to the tip is a large charity warehouse, so I usually reward myself for my green compliance with a rummage in there, and this visit did not disappoint. I came away with two framed prints (one antique!), a monochrome teapot with a nod to Mary Quant, a tea caddy, a mug, and a book by Julian Barnes - a snip at £15 for the lot. Back home, I made tea with my new accoutrements and knuckled down to the task of integrating this latest clutch of books.

This proved to be no easy feat, as my sitting room is already brimming with tottering tsundokus - like my father before me, I do suffer from a touch of bibliomania - and I spent an hour or so emptying out knick-knacks from shelves in a bid to free up more space for the even greater surplus. Having integrated the vast majority of spare books, I only had a few small format ones left, and set about looking for any kind of receptacle or nook where I could stash these. My eye lit upon several decorative boxes on top of a bureau, the largest of which I thought might serve my purpose. I fetched all three down and opened them: the smallest was home to half dozen highlighter and marker pens (so that is where they went!), while the other two contained perfume samples.

What was odd was that ALL the samples in one box had evaporated! I don't know if they had had very little perfume left in them anyway, or whether the seal of the box was defective, or what had occurred, but they were empty. Forgive me for the trivial comparison, but to chance upon so many expired samples in one place had a whiff of the Jonestown Massacre about it, as though the vials had collectively agreed to lie down and give up the ghost at the same time. And I must confess that at this relatively jaded stage in my perfume hobby my first thought was relief... Here were twenty or so scents with which I no longer had to engage...and yes, I know that is ungrateful of me. I did duly sniff all the vials, mind, to remind myself of how they smelt - there is invariably a trace of fragrance left around the nozzle - but I think I will chuck them presently.

The other box contained an eclectic mix of things that I had meant to review one day - and may still do perhaps - along with designer rejects, and samples of such extreme obscurity that I have absolutely no idea how I came by them, or who the brands even are - and if they still exist. A couple of samples caught my eye though...Slowdive and Shangri La by Hiram Green, the innovative Dutch perfumer noted for his hyper-realistic vegan range. I parked Slow Dive for now to retry at a later date, and immediately dabbed a bit of Shangri La on my wrists, intrigued by the name, which struck me as an ironic counterpoint to the state of the world at the moment.

Well, how beautiful is this? Shangri La is classed as a chypre, and I was initially reminded of Mary Greenwell Plum and 4160 Tuesdays Goddess of Love & Perfume: after a juicy citrus opening blast, Shangri La also showcases a luscious fruity floral bouquet including peach, with oakmoss in the base. The texture is unctuous and rich (Think Patou Joy if you are not familiar with the other two) without being cloying, though it might still be a bit full-on for some until it has settled down. A number of reviewers have compared Shangri La to Mitsouko, with caveats of course, given the latter's status as a towering  behemoth of the 20th century. Shangri-La is more cheerful, and less overtly retro, austere, and "dusty" to my nose. It is also twisty turny in its development: at times faintly spicy, or powdery (thanks to the iris?), with bright darts of peach and jasmine periodically peeping through. Whatever facet greeted my nose, it was just gorgeous, in a wistfully vintage way, and I don't say that lightly.

And so, speaking of things being twisty turny, this is the story of how a pair of old curtains and other detritus eventually led me to Shangri La...a tender ray of sunshine for these dark and ominous times.

Pink grenade : how Viktor&Rolf Bonbon (flower)bombed my search for myself

It's Valentine's Day again... regular readers know better than to come to Bonkers looking for inspiration on the Ten Best Rose Perfumes to give your loved one, or anything else of that predictable romantic ilk. Which is not to say that I haven't written posts in the past tailored to this (sadly increasingly commercial) occasion - several may come up in this link - but the post that popped into my head to write this morning is more pink in its inspiration than the classic deep red of rose and heart motifs...

For at the weekend a friend in the US sent me a link to a Luxe magazine article; it lists the "37 Best Perfumes for Women", with the byline: "Find your signature scent". You can immediately tell that this piece was aimed at a mainstream audience, for perfumistas prefer to own fragrance wardrobes, on the basis that "more is more". Anyway, each of the 37 perfumes listed had won a separate category, which included "Best Luxury", "Best value", "Best floral", "Best for night", "Best as gift" (another notion we don't hold with, unless the person has specifically requested said scent as a gift!), "Best over 50" (Dior J'adore- pardon?!?), "Best for young", and so on and so forth in that reductionist and inevitably doomed pigeonholing vein. FYI, Black Opium was "Best for night", which says it all right there. And how Byredo Bal d'Afrique could take the prize for "Best earthy" beats me. Where is the oakmoss and patchouli? And right at the top of the list was the perfume deemed "Most popular"- or should that be "Best popular" for the sake of consistency? - namely Viktor&Rolf Flowerbomb.

Seeing this accolade awarded to Flowerbomb fired me up with indignation, which may have coloured my reply to the friend:

"Ah, that list had more of a 'designer' bias than the niche perfumes I am mostly into, and when that happens I always wonder if the perfume house has chucked them a load of money to promote their product. I say this, because Viktor&Rolf gets a mention, and if I do an Internet search for my blog - Bonkers about Perfume - up comes a load of images of V&R bottles as the first result, even though that clearly has zilch to do with the search terms. So I tend to completely disregard 'Best of' lists in women's magazines, sorry!"
I may have been a bit harsh there, but I have been really exercised by the monotonous regularity with which Bonbon ads bombard the search results for the blog, the butterfly-shaped bottle serving as an additional taunt, in view of my online "flittersniffer" identity. It doesn't happen with any search engine, mind - just on Microsoft Bing, which I have on my netbook. Google has no ads, whether accessed through my Firefox browser (desktop PC) or Chrome (phone). I spend most time on my netbook though, so the pink-winged bottles will continue to torment! Do let me know if you use Yahoo or any other search engine (eg Duckduckgo?), and get ads as the first search result.
I would also be interested to know whether you would assume that Flowerbomb really is "the most popular perfume" through its own merits, or whether a massive marketing budget has managed to lob it front and centre of consumer consciousness, like a great big pink grenade on a mercenary mission. And I don't necessarily even mean by greasing reviewers' palms with silver - which is mere supposition on my part, after all - it could be by aggressive in-store promo campaigns, or saturated magazine advertising, or SEO-jiggery pokery, or any other kind of above or below-the-line spending.
Anyway...I guess I got myself a bit worked up - more over the nefarious power of brands to buy exposure and/or influence than the mere fact of my blog not having the prominence you would expect for an exact match of the search phrase. Tomorrow I will sally forth as is customary, and hoover up any out of date Valentine's bargains I spy in the form of flowers or foodstuffs. I would say "in a therapeutic act of 'self-care'", but I have come to dislike the expression "self-care" every bit as much as "uptick", "put food on the table", and "baked in". "Baked in" being my newest and most irritating mot du jour - usually used in connection with Boris's character flaws rather than to denote the inclusion of dried fruit in a cake. That's assuming you have the funds to put the ingredients for food on the table.
Then tonight I am off for a girls' night in with two friends. As an offering I am taking a large jar of Sauerkraut, a partly used bottle of magnesium tablets, and a small hot water bottle cover I knitted for the hostess's son's puppy**. Oh, come to think of it - that is red (though it looks more like "hot pink" in this photo, haha).
Happy Valentine's Day, however you are spending it! 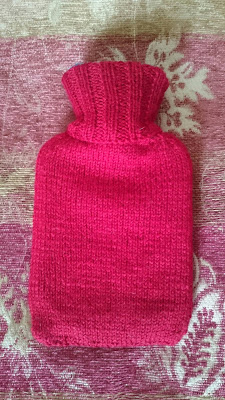 **NB The hostess and I do have a long and honourable tradition of unconventional present exchanges - packets of quinoa, half bars of chocolate, open bottles of wine and life-limited fruit have also featured.