I was making lunch unusually early last week (between 12 and 1pm!) when I chanced upon this interview on Radio Four's 'You and Yours' programme with Lizzie Ostrom (Odette Toilette of Scratch+Sniff events fame) and Kate Williams, a perfumer with Seven Scent, a company based in Manchester specialising in functional fragrances.  The eight minute segment kicks off with a reference to the economy and the so-called 'lipstick effect', and how this could equally be said to apply to perfume.  We are apparently spending three times as much on scent as bread, would you believe? - though I suppose a loaf is only about a quid, and some people eat cereal for breakfast ;-).  The discussion moves through into a consideration of the emotional role perfume can play in people's lives and the concept of a scent wardrobe.  Lizzie describes herself as a 'perfume floozy' - hey, we can all relate to that!

The clip itself doesn't appear to be available for embedding here, but you can listen on the BBC site.

You and Yours perfume clip

Owing to the all-consuming nature of work lately, my newspaper reading has been even slower than usual.  At the best of times it can take me a whole week to read the Saturday Times, but sometimes my piecemeal progress with the paper can stretch to a fortnight.   Thus it is that the subject of this post draws on an article in The Times from May 4th about a Spanish restaurant in Girona run by three brothers, which has been named as the best restaurant in the world - El Celler de Can Roca.  As someone who frequently skips lunch in favour of a sort of 'teabrunch' around 4pm, I was alarmed to learn that lunch at El Celler de Can Roca costs a cool 165 euros and consists of no fewer than 21 courses.  And even if I had an appetite to do justice to that number of courses, I would be a bit lairy about some of the dishes on offer.  'A grilled prawn with foam and seawater and sponge cake of plankton' sounds a little ominous, and I wouldn't go a bundle on 'caramelised olives filled with anchovies' hung on a bonsai olive tree, not least because I don't care for olives and anchovies.

But what caught my eye in this extensive and gastrononomically envelope-pushing menu was one of the four desserts.  At least I assume they were all desserts - I am going by the natural break in the text between those four items and 'pigeon with mole poblano sauce and charcoal-grilled strawberries'.  Though with strawberries in there too it really is anyone's guess!.  And hopefully no actual moles, as the poor creatures wouldn't have seen that posthumous pigeon-paring coming, God love 'em.

Yes, the dessert that caught my eye was: 'A fragrance adapted: Shalimar by Guerlain'.

Pardon??  A flurry of googling later, I learnt that the pastry chef, Jordi Roca, has got form for making desserts that conjure up well-known perfumes.  He had a crack at Calvin Klein's Eternity (which wouldn't have been my first pick, I must say), capturing 'the volatile soul of a perfume, deciphering the formula and adapting it to an edible reality'.

Jordi went on to devise a whole slew of desserts based on scents, from houses such as DKNY, Caroline Herrera, Hermès, Lancôme and Bvlgari.  I gather he had a spot of bother replicating Chanel No 5, as well he might really(!), even if he was armed with the culinary equivalent of a gas chromatograph ;-).  Okay, I am being silly - I don't actually know how he went about his fragrance deconstruction.

I found this description of a Terre d'Hermes-themed dessert on a Thai gastroblog called Sfreelife:

' Jordi had to distill the earth and pour the clear liquid over the chocolate-orange heavenly combination. The other key elements include patchouli, jasmine, pomelo, shiso and beetroot leaf.'

There's foodie verisimilitude for you...   Jordi's edible perfume creations even include Angel by Thierry Mugler - shudder.  There again, maybe it would be better eaten rather than worn?  And in a nice touch diners are also given a paper cone with the actual perfume sprayed inside to compare against the dessert they are eating.

Then in an intriguing reverse twist, there is also an actual perfume you can buy, inspired by a lemon dessert from the restaurant ie a case of perfume imitating pudding rather than the other way about.  It is called Núvol de Llimona or 'lemon cloud', and the dessert on which it is based is 'Lemon Distillation'.  Bizarre as this may sound - though let's face it, everything about this restaurant is a little left field - the perfume was designed to be sprayed as a mist over diners as they ate the dish.  Now that might be a case of sensory overload, I'm not sure.  Olfactoria recently asked the question about what perfumes you pair with food, but this is taking the notion a step further.

Here is a description from the Roca Perfumes site:

'With the co-operation of perfumer Agustí Vidal, Jordi has captured the essence of the dish, a “lemon muffin soaked in milk”, and has successfully encapsulated its flavour in a bottle of fragrance. 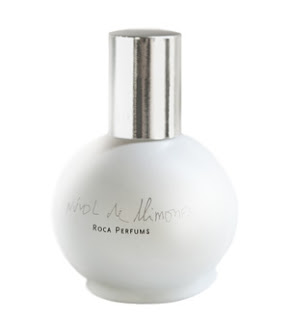 Oh - guess what?  My googling of images uncovered a post by Judith of The Unseen Censer - she has tried the perfume AND met both Jordi and the perfumer in Barcelona!  Seems like Núvol de Llimona gets a thumbs up from her, although she had issues with its longevity.  But she gves props to Jordi and the perfumer for avoiding a 'Lemon Pledge' note - that alone is indeed some feat.

After all, there are a number of gourmand dessert-y scents around, so the latter route at least is fairly well trodden.

But going back to the Times article that caught me eye, eating Shalimar would be an altogether different matter in my view.  Especially if Jordi managed to replicate the civet...

Finally, here is a photo of the great man himself - a little bit edible himself, you might say.

I realise it is over two weeks since my last post, so I thought I should write a quick line to explain that I have been uncharacteristically swamped with work lately.  A recent spate of projects has meant a series of early starts, late finishes and lost weekends, and this general pattern looks set to persist till the end of the month, though I hope to regain the weekends at least.  I am not complaining, as I had hardly any work at all last year, but it is hard to find time for hobbies - or even chores.  I have put off a dentist's appointment three times!  I am almost out of kitchen roll!  Okay...so however busy I am, I somehow manage to dip into Facebook still, but that connection with the outside world is helping to keep me going... ;-)

Now I do have lots of posts in mind for when I get the work-life-Facebook balance back again.  Meanwhile, here is a photo of a butterfly garden bench I spotted on the Interwebs.  I would love some vintage style patio furniture as it happens, but I think this might be too overtly flittersniffer-y even for me.