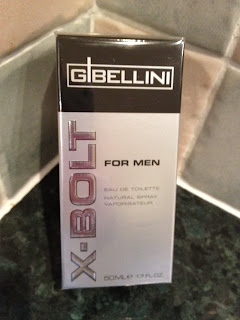 I am sorry my posts have been so sparse of late - now that I have some work again, I sense it will be even trickier to juggle that and the ongoing house renovations. I am mindful that I still haven't written up the remainder of my Belgian sniffing trip, however I was sidetracked the other day by a phone call from my brother. He had just picked up a bottle of Lidl's latest perfume release, X-Bolt by G Bellini. He explained that it was allegedly a copy of the original Hugo Boss for men (the bottle alone is a bit of a giveaway), and was curious to know if I had tried it. I don't think my brother had actually sniffed it himself at that point, because I remember him saying that if it turned out to be awful, it could always be repurposed as bathroom freshener, the fate of Jasper Conran Mister a few years back.

Well, as someone who has tirelessly championed the incredible smell-alike coup which is Suddenly Madame Glamour (a convincing, if somewhat weaker and more watery imitation of Coco Mademoiselle), I had to see for myself without ado, so I picked up a bottle of X-Bolt in my local branch of Lidl yesterday. Then today I nipped into Boots to spray on some Hugo Boss Bottled (to give it its full name), so that I could conduct a side-by-side comparison, albeit on female skin. Which is another reason for posting this right away, while the Hugo Boss is still relatively fresh on. 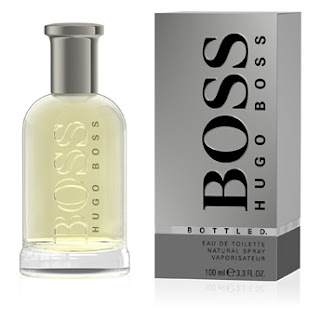 Hey, I have to say that once again I am very impressed. I don't know exactly what notes I am smelling, other than a vague luminously woody ambery quality and a slightly herbal facet, but I do detect a marked resemblance. The main difference seems to be that when you first spray Hugo Boss, it is soft and refined from the off (as men's designer scents go), whereas the Lidl scent is a little brash at the outset, but quickly settles down.

As you get into the drydown, the Lidl scent has acquired a more elegant character while the Hugo Boss seems to have become slightly more loud. This curious phenomenon may in fact be nothing more than the fact that by dint of wearing off more quickly - or making a bolt for it - X-Bolt has less of that "chemically men's aftershave-y" aspect in its latter stages. It has less of anything to be perfectly blunt. And remains at all times (while it is there at all) vastly superior to any men's fragrance I have ever tried bearing the suffix "Sport". If Hugo Boss Bottled is a 10 I would give X-Bolt a solid 8. I would quite happily sniff a man wearing X-Bolt, despite its naffly butch and somewhat Lynx-esque name; I would think he had dropped some serious cash on this bottle, not the princely sum of £3.99 for 50ml.

So in case anyone is curious here are the notes of Hugo Boss Bottled from the website of The Perfume Shop: 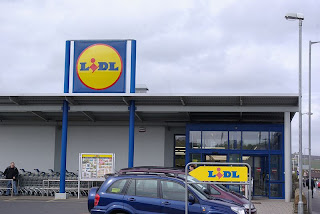 In the past, I had hell's delight wresting the notes of one of Lidl's first feminine releases, Suddenly d'Or, out of the company's technical department in Scotland (see full saga). I see that Lila Das Gupta, writing about the launch here for Basenotes, has managed to get hold of them - perhaps Lidl has softened its stance on such matters following the huge success of Suddenly Madame Glamour, conceding that public relations is a two way street.

Hmm, comparing those two lists they do seem to be along broadly similar lines. I wonder if the perfumer for Suddenly Madame Glamour pulled off this one too? To get so close to replicating a designer scent of this calibre on a shoestring is a remarkable technical feat, even if it might seem to some like a cheeky manoeuvre.

And as was the case with Suddenly Madame Glamour, X-Bolt has also done a blinder in a blind test, this time involving 108 people. It was carried out in London in June - in Mayfair, I see - so if respondents anywhere in Britain were going to turn their noses up at a cheapo grocery store perfume, it would be there! (Well, assuming they weren't bussed in from other less affluent neighbourhoods, that is - and maybe they were, in the interests of a representative sample.) 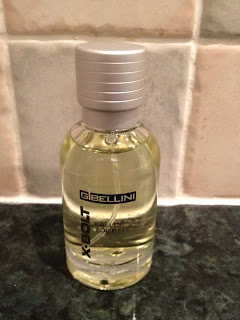 Whoever the respondents may have been, they were anything but sniffy...according to this article by PR Newswire consumers preferred Lidl's fragrance over David Beckham Homme (no surprises there...), Dior Homme, D&G The One, and Hugo Boss Bottled. I don't think it can just be coincidence that Hugo Boss featured in the test line up...

Has anyone else out there carried out a side-by-side comparison between the two? If so, let us know in the comments. But I for one am certainly struck by this new star in the grocery store galaxy, this "bossa nova", if you will - or do I mean "bosso novo", with it being for men...? ; - )

Photo of Hugo Boss Bottled from The Perfume Shop, photo of Lidl store from Wikimedia Commons via Clemensfranz, other photos my own
Posted by Vanessa at 20:35

As for the Lidl: I don't think it is such a feat to copy a perfume, since anyone in possession of a gas chromatograph should be able to do it (as I understand the state of the technology).
If I were Boss, I'd be a bit miffed...
But maybe I'm having a particularly ungenerous day... ;)

In the light of this info about gas chromatography, I am only surprised there aren't more prominent examples of knock-off scents. I realise it goes on quite a lot in the market trader / drugstore end of things, but those smell alikes - if they are in fact any good - don't really come to the wider public's attention.

Hi Vanessa! Missed you! Nice to see you here.

Provided that I'm not interested in the original perfume I doubt I'll even find time to test an imposter. But it was interesting to read about your experiment.

Hi V,
I see you were brave enough to put it on skin! I had rather low expectations of X-Bolt, so it was better than I thought it would be. Main thing is I don't care much for 'fresh' scents, including Hugo Boss Bottled. Having said that, it is at the better end of 'fresh'. Does it smell 'expensive'? All very relative. If we are going for expensive, I would prefer to smell a gentleman in Roja Dove's Aoud!

I quite understand that a Hugo Boss smell-alike is not likely to provoke a major stampede to Lidl in our fumehead community, even if you were better placed geographically to pursue it! : - )

But as you say, it was an interesting experiment.

I like "fresh" scents well enough, and agree that this was at the better end of fresh. Once it got going it had a softness and an airy sweetness about it, tempered by the more manly herbal notes, that seemed greatly superior to those "tonic sport" style scents that apart from anything often involve annoying levels of grapefruit.

Does it smell "expensive"? It doesn't have quite the refinement of the original, but there are other men's fragrances costing a similar amount to the Hugo Boss that smell more jarring and "cheap" compared to their actual cost.

So I would say that in relative terms it smells a lot more expensive than it is, but Parfumerie Generale it ain't.

Well that does sound surprisingly good for £3.99 from Lidl. I bet your brother is very pleased with his find.

BTW did you read on NST about the perfumes Lyn Harris has done for M&S? Three for women and three for men. I'm hoping to sniff them out soon.

I am so behind with all matters perfume related that I hadn't caught up with that NST article, no, but thanks for the heads up. I have tended to tune out to the M & S fragrance range up to now, but if Lyn Harris is behind these latest ones, I will be in there like a ferret up the proverbial.

Welcome back! I'm pretty nonplussed by this dupe, I must admit. But the name has given me quite a laugh. For some reason, I just find "X-bolt" so ridiculous.

The name is pretty silly, I agree - self-consciously masculine or what!

I bought this because it smells like (almost) the same as Hugo Boss bottled which i love so much! I can say 90% identically....For that price? it's like a jackpot to me.

Glad you like it - I do think it is a steal for the money!

Thankyou for that interesting post from a female perspective. I would just like to add a few things. Here in Germany Boss Bottled is'nt at all perceived as a freshy - more as somethimg like semi-gormand or kind of a woody-oriental. (for example at parfumo.de) Some people (including me) think x-Bolt in the drydown is remarkable sweeter and also a bit "cheaper" in the sense of one-dimensional. Annick Menardo is in my eyes a great parfumer, she did amazing things for Bulgari, Balmain or Lolita Lempicka. To imitate her stuff perfectly is really not easy. Here in Germany there is also a discussion abour gas.chromo.-technology in forums, but people working in parfume-business more or less think, you can't get enough information with this technology. Some important stuff (most not natural ingredients of course= is undetectable. You just get a very rough picturte, may be a few hints. Of course laboratorys can have advanced technology, but it's not as easy as one might think.