Bonkers got (partially) cancelled! And uncancelled again, but not without collateral hiccups

I thought I should write a line or two to explain why a post from 2011 briefly appeared just now as my most recent post - that's for any readers quick enough off the mark to spot it. I have now figured out how to publish to a past date, and the errant piece is back where it belongs in the archives.

How the sorry saga came about is as follows...I woke up this morning to a slew of seven emails from Blogger, each containing a link to a different blog post that they had "unpublished", as it violated their content policy on the grounds of being spam. Ironically, two of these notifications landed in my own spam folder, the very offence of which I had been accused.

I am glad Blogger pointed out which category of violation my posts fell under, as I would have struggled to work that out for myself: most of them seemed wildly inappropriate, such as "violence and gore", "unauthorised images of minors", "harassment, bullying and threats", and "non-consensual explicit imagery". Having thoroughly examined the wording of the spam clause, and looked for similarities amongst the seven posts, I concluded that it was the pr*ze dr*ws that Blogger took exception to, which it must have construed as "mass solicitation". Given how few readers enter such things on Bonkers, the term "mass" does seem a little overegged, but anyway...

Do not spam. This may include unwanted promotional or commercial content, unwanted content that is created by an automated program, unwanted repetitive content, nonsensical content or anything that appears to be a mass solicitation.

G*veaw*ys are of course - or were - a time-honoured tradition in perfume circles, and I can think of other blogs who host them with much greater regularity than me; it tended to be a once-a-year thing as a rule, to commemorate my blog anniversary (another one of which is looming!) or when reaching a milestone in terms of numbers of posts. But clearly Blogger has taken agin them, so there was nothing for it but to edit all the posts in question and submit them for review. To their credit, the people involved in assessing my changes were very prompt about it, and all the posts were approved and re-posted within an hour or so.

Most of them kept their original dates, except one with a review of a Puredistance 1 from 2011, which somehow managed to publish itself today. Now fixed, as I say.

Thinking about it, I am surprised I haven't been fingered for "nonsensical content", which is arguably not exactly my house style, but Lord knows I have written a lot of whimsical and silly copy down the years. ;)

Now what this all means is that the posts have been changed, but the comments below remain, including references to the various pr*ze dr*ws to which there is no longer any reference in the post itself. I could have deleted all of them, but would then have lost the other remarks people made, which would have been sad. (Especially as I lost a bunch of genuine comments recently when I reacted too hastily to a spam attack by a third party.) There were 44 comments in all on the Puredistance post I mentioned, which is from the days when I used to have a lot more reader interaction. I may go back in later and add a note at the end of each post, explaining what has happened and why there is now "nonsensical content" in the comments(!). And I should also delete the companion posts from the following week announcing the results of the g*veaw*ys, only one of which has been picked up by the bots - and strangely not the post in which the dr*w was originally mentioned.

All of these examples of mass solicitation are very historic though, so I don't really see what the point is of amending them so long after the event. It is not as through anyone could respond all these years later, as the entry deadlines are well and truly past. I am reminded of the current fashion for removing all traces of historical misdemeanours more widely, for example by toppling statues of controversial figures from centuries ago. But that is a whole other discussion I don't wish to get into here. I will just carry on with my blog housekeeping, complying with any further requests by Blogger to remove more posts that contravene the guidelines. With the Online Safety Bill in the offing, who knows what offences I may yet unwittingly commit?

And I would be interested to know if there are any other bloggers out there to whom something similar has happened, though I sense most people on the perfume scene use Wordpress these days, where the content rules may be more forgiving.

Another bitesize post - a blogging amuse-gueule if you will - about an unusual discount item spotted in a branch of B & M (formerly B & M Bargains) in Stafford the other day. I popped back this afternoon to take a better photo and can confirm that this item, reduced from £18.99 to £12.60, is - perhaps not surprisingly - still for sale. Reduced in price, and sadly also radically reduced in terms of its missing centrepiece of a full bottle of Sarah Jessica Parker Lovely.

I always used to say that Lovely is one of the early celebrity scents that punched above its price tag. Well, that is even more the case now that this Lovely-shaped hole is valued at a mere £6.39. For 100ml! The rollerball is 10ml and the body lotion 200ml, and I cannot see how such a modest price reduction is justified...For on a purely pro rata basis the rollerball would therefore be worth 64p(!), and the body lotion just under a whopping £11.96, which is 87% more than the perfume that isn't there. That's never right.

The maths gets even more off kilter when you compare this set to one costing £9.99 and containing 3 x 10ml rollerballs: one of Lovely plus two of its flankers (Born Lovely and Sheer Lovely); it is also on sale in B & M, with all three perfumes still present and correct in the box. Each 10ml costs £3.33, much more than a tenth of the £6.39 the absent 100ml bottle is supposedly worth. And I know that smaller quantities cost proportionately more per ml, but still...even if the rollerball in the discounted gift set were worth twice 64p, the difference versus the trio set is quite stark. 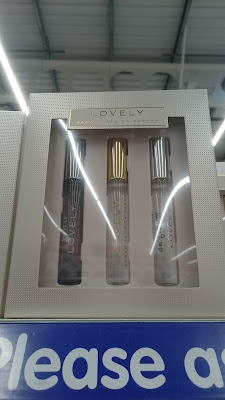 And you do have to admire the sheer effrontery of the person who removed the bottle from its box. The perfume was presumably pilfered, for I cannot imagine the store allowing a customer to buy the bottle on its own, the way they usually condone my purchases of lone bottles of mineral water from a previously broached polythene multipack.

For anyone who manages to find a complete set, this is certainly a bargain..."a steal", I could almost say.

Speaking of which, we can at least take comfort in the fact that the thief will smell lovely...;)