It's been just over three years since I embarked on a quest to help my friend Jessica find a 'really rosy, yet cosy' perfume, ideally to become her signature scent. The initial phase of the search is recounted in the original post, and for reference this was the brief:

"I think what I want is something soft and comforting without too many other notes competing with the rose. A little spiciness would be okay, eg cardamom. I want it to wear every day, for myself, rather than to make a statement."

Over the weeks I sent Jessica a clutch of samples I happened to have of things I thought she might like, forwarded links to compendium posts of rose perfumes of every style on Perfume Posse, Boisdejasmin and NST, sporadically came up with names of other scents that might conceivably hit the spot, and enlisted the help of Tara and Birgit a month or so into the exercise, who auditioned a handful of additional perfumes when we swung by Libertys (Jessica's preferred hunting ground) after our brunch in Soho.

I did struggle to find really rosy perfumes with that extra touch of spice Jessica was after, as the ones in that vein invariably proved to be insufficiently rosy. After a while, we narrowed the focus to the fragrances' inherent rosiness and dropped the 'spice route', as it were. Even so, it was important that the rose notes were not overpowering - Frederic Malle's Une Rose, while initially promising, ultimately failed on that count.

In the end, as is often the way of these things, Jessica has found 'the one' entirely unaided, and I couldn't be happier. I don't mind how a person finds a perfect scent for them, as long as they do!

The other day, out of the blue, I received this email from her:

"Hi Vanessa,
I was in Liberty’s today and gave Mogador by Keiko Mecheri another go. It’s definitely the one! Pure creamy rose - I don’t detect jasmine although I know it’s in there - but with that Japanese lightness and subtlety. So glad my quest is over!
Jessica xx"

Now I couldn't remember ever recommending Mogador at any point (doh!!), though I know that Tara and Birgit and I thought Keiko Mecheri's Attar de Roses might be a contender. A delve into my email archives revealed Jessica's own early reference to it...

"...another scent that nobody mentioned, 'Mogador' by Keiko Mecheri. (Do you remember last year my saying I was interested in Japanese perfumes? I gather KM operates from NYC but she is Japanese...). I have one on each wrist and think that while 'Une Rose' is longer-lasting, I might prefer 'Mogador' because it is not as sweet. I'll try them again, though, along with the others on the list (although it could take me some time)."

To which I replied:

"Interesting about Mogador, which I hadn't heard of, although I have tried some others by Keiko Mecheri, and have a decant of her musk one. It's a line I have seen in store in the US and which you do also find in good European perfumeries. However, it is much less talked about and reviewed on the blogs than many other brands. I can see how the Japanese angle would appeal.

Here are some Basenoters on the case - they are pretty in favour as you can see - it seems a very rosy rose all right, which is what you were after. Does it have a darker drydown / twist, and if not, do you think abandoning the twist might be the price for gaining extra rose?"


And then I promptly forgot all about Mogador for three years, even though Undina kindly gave me a 'Flo' of it last May when we met up - which is now completely drained! At no point did I think to go back to Jessica and add it to her list of scents to try, but as luck would have it she remembered Mogador herself, even after all this intervening time... 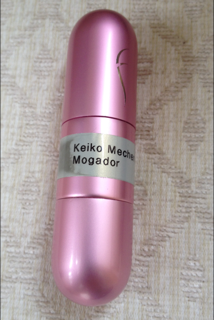 On hearing the good news about her rosy epiphany, I inquired further into the exact circumstances:

"I think Mogador was one I found while browsing in Liberty's at the beginning of my quest. I remember thinking it was lovely, but I thought at the time it was a bit too subtle. It certainly seemed a bit weedy in comparison to Frederic Malle's Une Rose (which I now find completely overpowering). I think I may splash out on a bottle when I'm next there as I can't see myself going off it in a hurry."

Mogador was created by Yann Vasnier and has the following notes:

And a word on the name, Mogador, which makes me think of Mogadon, a class of benzodiazepine drugs to combat insomnia. A post on that very topic may well be coming along soon! But getting back to Mogador, it was the Portuguese name up until some time in the 1960s for a resort on the Moroccan coast now known as Essaouira. It is additionally the name of an island just off the coast opposite Essaouira. And Dades roses are cultivated in the Dades Valley, in the High Atlas Mountains of Morocco. A Moroccan theme is nicely knitting together...


My favourite titbit about Mogador is that in the early 1950s, Orson Welles filmed several scenes of his 1952 version of 'Othello' there. Wikipedia goes on to tell us more about the famous director's connection with the town:

"Legend has it that during Welles's sojourn in the town he met Winston Churchill, another guest at the Hotel des Iles. A bas-relief of Orson Welles is located in a small square just outside the medina walls close to the sea. It is in a neglected state being covered in bird droppings, graffiti and with a broken nose. In addition, the dedication plaque below it has been stolen (as of Dec 2008)." Alas poor Orson!


So there you have it...sometimes it takes no time at all to find the scent that blows you away - my friend B who fell hard for Beyond Love is testament to that - and sometimes it takes slow, meticulous trial and error. Either way, Jessica has finally found rosy closure, hurrah!

To round off this post, here is another video of Jessica's band in action, featuring Val the Cookie Queen's favourite bass player!

I'm so happy Jessica finally found her rose! I feel like I have closure too, haha. Lovely to read about the one she decided on and how she got there. Oh and I was also thinking of Mogadon. Hopefully Jessica doesn't have the same association. Is it at all spicy? It's nice she found something with the Japanese angle that appeals to her. Not a perfume I had heard of either. As you say, it's a rather overlooked brand in our circles.

I feel like I want to try Mogadon too now, hehe. It is not at all spicy - we abandoned that facet altogether, though we did try all the obvious suspects of 'roses with a twist'. Jessica grew up in Singapore and is very attuned to all things Eastern. I think Undina is more up in the line, with it being well represented on the West Coast.

So glad she found the rose of her dreams. I've never tried that one, though I do like Essaouira. But I associate that more with the lovely aromatic smell of Thuya wood.

Ooh, someone who knows Essaouira! Scurries to google Thuya wood...what a lovely grain as well.

I wore Mogador today: I can hardly imagine anything farther from the spicy rose. But it’s such a beautiful rose! If you still haven’t got rid of that flo, we can do a refill on one of the next mule’s runs - I have plenty.
This brand isn’t widely available in the U.S. either: in all my years of perfumes explorations I saw it only once in MinNY. I came across it though in a couple of places in Stockholm (and thought of getting a couple of samples once I get home - and then forgot).
I’m glad your friend found “her” rose but I’m surprised it took her that long: there are so many great rose perfumes these days.

Yes, Jessica did come quite a long way from the original brief, but it was so difficult to find a seriously prominent rose with the spicy accents that we just gave up in the end.

I do still have that Flo! I would be thrilled to have a bit more of Mogador if you could spare it.

Interesting that you haven't seen the brand in many places either, even the US.