The Da Vinci Formulation: Review Of The Perfume Collector By Kathleen Tessaro 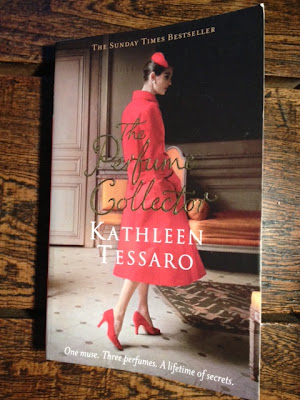 The other weekend I finished reading The Perfume Collector by Kathleen Tessaro - there are a number of very comprehensive reviews in circulation already, so arguably the blogosphere is not in need of another, but my reading rate has been so woeful of late that the finishing of any book is a remarkable event worthy of commemoration.  In truth, I only took a month or two to read this one, which is a relative romp compared with the seven? that I spent on Alyssa Harad's Coming To My Senses.  This is mainly due to a sudden and inexplicable influx of scalding hot water from the boiler, facilitating a few long wallows in the bath, though I would also say that - conducive reading environment aside - The Perfume Collector is a right old page turner!

‘Our firm is handling the estate of the deceased Mrs Eva D’Orsey and it is our duty to inform you that you are named as the chief beneficiary in her will. We request your presence at our offices at your earliest convenience, so that we may go through the details of your inheritance.’

There is only one problem. Grace has never heard of Eva D’Orsey.

So begins a journey which leads Grace through the streets of Paris and into the seductive world of perfumers and their muses. An abandoned perfume shop on the Left Bank will lead her to unravel the heartbreaking story of her mysterious benefactor, an extraordinary woman who bewitched high society in 1920s New York and Paris.

Yes, I was thoroughly gripped by this fiendishly plotted tale.  For this reason - and also because of its partial setting in Paris - I would liken the novel to Dan Brown's Da Vinci Code (which I and only umpteen billion other readers greatly enjoyed!) crossed with Downton Abbey and a goodly squirt of perfume.  The review with which I would most closely align myself is that of Natalie of Another Perfume Blog.  Like her, I find the characterisation a bit two-dimensional and the period feel somewhat lacking - which is all the more marked as the story is alternately held in TWO historical periods, the 1950s and late 1920s, but I was nonetheless kept happily in suspense by the twists and turns of the action.


For The Perfume Collector is, as they say, 'a ripping yarn', and I don't think it is giving too much of the game away to say it features pretty much every theme going, including glittering Gatsby-esque parties, poor orphans in service, gambling cheats, Nazi persecution, sexual abuse, post-traumatic stress disorder, marriages of convenience, adultery, a miscarriage, a suicide or two, alcoholism, bisexuality, snobbery, mistaken identity, a high class prostitute, dangerous vegetation and some mysterious and tasteless ceramic figurines.   Well, no, that's an exaggeration, there's no black magic or clowns.  My favourite line in the book refers to a high class escort in New York, Miss Waverley, who plied her trade in a hotel where one of the two female protagonists in the book (Eva d'Orsey) is a maid.  Miss Waverley is teasingly described as 'a regular guest, although not a paying customer herself.  She just appeared, rather as an intriguing footnote to the travel arrangements of some of their wealthier male clients'.

One or two minor things bothered me about the novel: there is a major coincidence when two key characters who knew each other in New York happen to be staying at a hotel in Monte Carlo at exactly the same time.  There wasn't even an event like the Cannes Film Festival or the Grand Prix that might conceivably have brought about that far-fetched collision.  I also worried when these two made an excursion to Grasse on the train.  They decide to stay out late, intoxicated by the heady scent of the jasmine fields.  However, Grasse isn't Crewe or Grand Central Station - certainly not in the 1920s - and I couldn't help thinking they would almost certainly have missed the last train home, which tiny techical detail managed to distract me from the part of the storyline.

Then there are some perfume-related revelations about the other female protagonist (Grace Munroe)'s childhood, which are kept back till very near the end.  I feel sure that, given these childhood associations, Grace would have made a few key connections about the mysterious sequence of events unfolding in her life a heck of a lot quicker.  I also found her abrupt mood swings in her dealings with Monsieur Tissot, the estate agent handling the property she has inherited, a little bewildering.  Then there was also the odd typo and misplaced apostrophe, always guaranteed to wind me up (Place des Vogues, hello?!), but I can't lay the blame for that at Ms Tessaro's door.


After the breathtakingly complex plot, the descriptions of various vintage perfumes were the most rewarding aspect of the book for me, and here Kathleen Tessaro is in her descriptive element.

"Opening it, she sniffed the cork.  Its contents had long since evaporated, leaving a slightly grainy amber residue at the bottom of the bottle.  But there was a ghost of the intensely white bloom, undercut by a coolness, an almost metallic airiness, slicing through the depth and lushness that lingered still."

She is also a great ambassador for the fumehead community, extolling the transformative power of fragrance in people's lives:

"Perfume should tell a story – the story of who you are, who you might be, perhaps even of who you fear becoming…all of these things are possible. It’s a very intimate element of a woman, just like her signature or the sound of her voice."

Yes, any book that celebrates the power of perfume to help you "come to your senses" (that very phrase is even used in The Perfume Collector once or twice if my memory serves me), is to be welcomed.  The odd structural and characterisation niggles were vastly outweighed by the being swept - nay, wafted - along by the action until all the chips were down - in Monte Carlo and beyond  - and all the stoppers and secrets were out of the bottle...


Disclosure: I was sent a complimentary copy of The Perfume Collector by the publisher, HarperCollins.
Posted by Vanessa at 22:35

Thanks for the review, V.

It sounds like there's so much going on in this book, I'm a little overwhelmed at the thought of it! But then again there's nothing worse than a dull, slowing moving book. I'll definitely download a sample and see how I get on. I do like Downton Abbey, perfume and The Da Vinci Code!

BTW it is so annoying when extremely unlikely things happen in novels because it's so distracting.

I was so swept along by the action that I wasn't really struck by the colourful clatter of characters and events till I finally put the book down. Then I realised just how many it had managed to pack in.

I do think most people would enjoy this book - there is much to savour on all sorts of levels, even if the characters are a little thinly drawn.

Brava, Vanessa! You do this justice (and I had forgotten about the dangerous vegetation). When you list out the elements like this, there is quite a cornucopia. We should have been on the lookout for zombies! Thanks for the linkage, too.

'Cornucopia' is a good word for it! And how could we forget to check for zombies? There may well have been some in there. There was certainly someone with a compromised sense of smell.