Bonkers does Brighton, Bognor, Bosham and Beyond

Okay, firstly that title is a slight case of poetic licence...  It should read Hove, Bognor, Chidham and Beyond, the beyond being Sidmouth, but it was worth sacrificing a little geographical accuracy on the altar of alliteration for the sake of a mile or two in either direction.  Yes, I am off in the morning on a lightning tour of various friends and relatives on the south coast.  The lynch pin of my itinerary will be a gathering of the Musson clans near Chichester to mark the occasion of my cousin's wife's 60th birthday.  Her signature scent of Pure White Linen is (somewhat tangentially) featured in this odd post from three years ago. Odd but strangely timely, as a heatwave is also a prominent theme, along with ex-Mr Bonkers' "delicate ecosystem".

But going back to the birthday party for a moment, apparently we are meant to wear a hat - "the sillier the better" - the invitation states.  So I have a choice of a bath hat, an angora beret (my personal favourite, as it is appreciably less silly if one must wear woolly headgear in high summer), and a sort of Peruvian chunky knit number with ear flaps.  This striking item cost me a fiver in Asda Living - I have never worn it and it is strictly "earmarked" for long solitary wintry cycle rides (that obviously never happen).  Plus I have a floaty straw hat that would look completely normal, but which would probably be excluded on those very grounds.

UPDATE:  I have tried on all the hat contenders, and it is just too hot to wear any of them, barring the straw one at a pinch (and a scratch).  If the hat-wearing rule is rigorously enforced, I propose to wear it the wrong way round as a small concession to the spirit of the event.


UPDATE 2: Or....what about this idea?  The insertion of Max Rat, my sometime travelling companion on overseas work trips, cunningly transforms the hat into a 'rat's nest'.  Which would be novel! 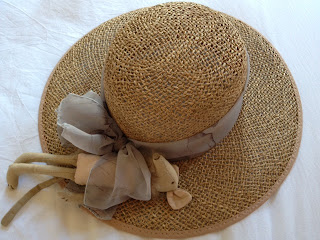 Before reading to the "rat" portion I was thinking about adding something silly to the straw hat. So I like your idea though due to the coloring your solution might not be bizarre enough.

I know what you mean - Max is almost the same colour as my hat. I do have a shower cap with me as back up. A Santa hat might have added an ironic touch to proceedings if I had been organised enough!

Hope you have fun at the party, V! What a happy gathering of Mussons it will be. It's way too hot for anything woollen though, I agree. I'm sure you'll find the perfect compromise and no doubt hats will be abandoned not too long into the proceedings.

I downloaded The Perfume Collector today so looking forward to getting stuck into that at some point.

The party was great, thanks! There were some cracking hats and amazingly they were retained by most of the guests for a good six hours or so.

I went with the rat's nest theme, as you saw on Facebook, and that seemed to go down okay. Quite a few people had also decided to 'silly up' hats of a fairly standard design in this way, so I was in good company. ;-)

Happy to hear all went well with the "rat's nest" idea. Going along with your first impulse, I probably would have not worn a hat and argued that to be hatless in a company of hatted peopled was sillier. ;) Stay cool!

I salute your cunning logic! It was fun in fact to enter into the spirit of the thing, even if the rat's angle of dangle did rather impede eating.