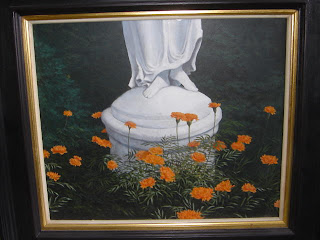 Ask anyone in Britain over the age of 45 what is the first thought that pops into their head when you say “Barcelona”, and they may well reply: “Manuel from Fawlty Towers”. Played by Andrew Sachs, Manuel was the mightily confused and browbeaten waiter in the long running sitcom, for whom John Cleese famously tried to make allowances:

“You'll have to forgive him. He's from Barcelona.”

I am sure that the choice of the Catalan capital on the part of the scriptwriters was completely arbitrary. It could have been Cuenca or Salamanca or Valladolid, which – as never ceases to amaze me – does not rhyme with “stolid”, but is in fact pronounced “Bi-ya-doe-leeth”. The point being quite simply that Manuel was foreign, and so in Basil Fawlty’s warped view of the world, inherently defective as a human being. His poor language skills can’t have helped. 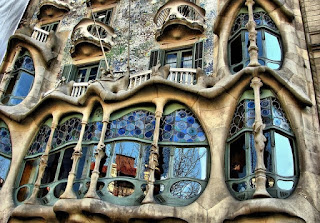 But that was way back in the 1970s, when package holidays were in their relative infancy. Nowadays, Barcelona is one of the top destinations for a city break, with its flamboyant and quirky architecture, museums, nightlife, chorizo- and churros-centred cuisine, parks and broad Las Ramblas boulevard. The recent popularity of the gothic works of literary fiction "The Shadow of the Wind" and "The Angel’s Game" has served to put Barcelona even more firmly on the map.

As for me, I have only ever driven through the city to get to the airport, though I would very much like to visit at more leisure. This is for all the usual reasons and also because I own the picture above, painted by an artist friend in 1991; it depicts a statue in a Barcelona park, and I would love to go some day and find the original. In preparation for this post, I quizzed my friend about the exact location, and after a modicum of head scratching and googling, he is pretty sure that the statue is from the gardens of the Palau Reial de Pedralbes. I just looked this palace up myself, and found it in the middle of the city, on Avenida Diagonal 686.

Which seems spookily fitting, because the perfume I am reviewing – the other main hit from my Düsseldorf sniffathon apart from Truly by Stephen Burlingham – is Carner D600. Yes, you’ve guessed it, the name stands for the address of the company’s offices, on Diagonal 600, just a stone’s throw from the site of the statue…. 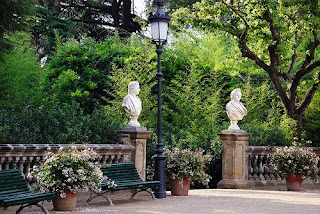 Carner, a perfume house founded last year by Sara Carner, was not on my radar before my German trip. Its two début scents, Tardes and D600, were created respectively by Daniela Andrier and Christophe Raynaud. D600 is inspired by a morning scene, Tardes (as its name suggests), by an evening one. Actually, rereading the description on the carded sample of D600, it is associated with both ends of the day…

“The early buzz of the city mixes with a gust of fresh morning air. Las Ramblas and La Bouqueria full of fresh picked bouquets, ripe fruits and spices, release an exotic mixture of aromas. As the Mediterranean sun warms the day, all senses are captivated by the dynamism of Avenida Diagonal and the grandeur of Paseo de Gracia…A seamless blending of old and new. At night, the pulse deepens and darkens as the city reveals its mysterious and most sensual side.”

I shan’t focus on Tardes, whose almondy/heliotrope-y/geranium accord disagreed with me rather, so it would be better to allow someone partial to that note combination to give the scent a fair critique. It reminded me of Fleur Oriental meets Barbara Bui meets SL Louve, which as anyone who knows my taste will tell you, is not a good thing. 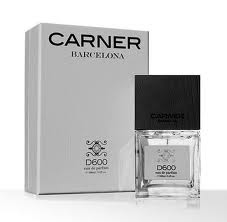 But D600 was a different proposition altogether. According to Frau Berchem of Beauty Affair, both scents are positioned as unisex, and while I think D600 is the more masculine of the two, I could definitely see myself wearing it. I also think that it lives up to its PR blurb and is simultaneously a bright and piquant day scent and a sultry choice for evening.

So what is it like? Well, the opening is the most masculine part – a whiff of pepper and spice and possibly the cedar and vetiver poking through – the overall effect is quite dark and green – I’d almost be inclined to say a note like cypress, though I see none in there. But even this, my least favourite stage, is still beautiful. The overall effect is soft and rounded, not scratchy or overly resinous as those notes can be. If there is bergamot and grapefruit in the opening I can’t say I can detect them, though maybe they are keeping it from being too sombre and butch. 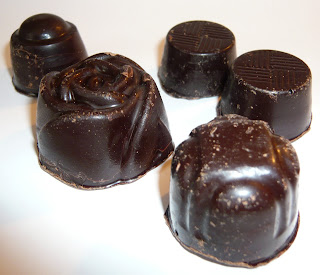 Then by and by, the iris and jasmine assert themselves and the composition becomes perfectly balanced between the more feminine floral notes and the manlier spice and woods. The iris and jasmine are like the fondant cream in a dark chocolate. Faintly sweet, yielding, and contrasting in taste with the bitter exterior of the candy shell.

All the perfumes in the ever changing kaleidoscope that is my top 5, 10, 20, whatever scents, share one thing, regardless of style: they are all affecting in their own way. D600 is one of very few unisex scents to move me like this, an all the more impressive feat for a scent that is “dark green” in my mind’s eye. Ormonde Jayne Man or Woman and Chanel Sycomore are all impressive compositions, but don’t stir my emotions as this one does. How does the strapline for that ad go for SEAT cars? You know, the one with the play on the words “automatic”, “emotion” and “motion”? “Auto Emoción”, that’s it. One whiff of this, and I am instantly filled with Auto Emoción! 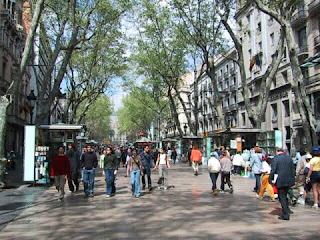 Yes, this is a moving scent in every sense - also for ambling along Barcelona’s wide boulevards. It is the perfect pick for that typically Spanish custom of “el paseo” - “walk”. But not just any walk, mind, as in one that gets you from A to B. No, Spaniards walk to be seen out walking. It is the custom for whole families to go for a stroll in their Sunday best with no particular aim in mind other than to wander where the mood takes them, as long as it is down the main arteries of their town, for maximum visibility. Or that is what our teacher told us in my Spanish classes 20 years ago… Maybe they do in fact all jump in their SEATs now...

And this scent would be good not just for walking, but for standing still, and taking in the buzz of city life all around you...from the early morning markets till the last tapas bar kicks you out at 3am or 4am, four glasses of Rioja to the wind. And when I say standing still, I don’t mean like the woman in the painting – even though the mysterious dark greenness of the painting perfectly conjures up the overall vibe of D600 for me otherwise. The thing is, I don’t reckon she can get down off that plinth, not to mention her apparent lack of an upper torso.

No, if I were you I would apply a generous spritz of D600, get on down to Las Ramblas, and put your best foot forward...

I'm so glad you reviewed this, I've never heard of the line and now I'm very intrigued by your description.
I was lucky to be able to visit Barcelona on a high-school trip but not for too long. I do hope you get to spend some time there. :)

I think this scent may be in our (fairly small!) "crossover" territory - as I recall, you like "Mediterranean" scents of various kinds, eg with conifer trees or vegetation of some kind, and this is a fine example. Well, it may just be the vetiver and cedar that create that impression, but it does feel "dark green" to me.

Vanessa, you're completely right. "Mediterranean" is a very good description of what I like and dark green is definitely something I go for. :)

You absolutely have to try this. If you email their office in Barcelona I am sure they will send you a sample.