Plump Up The Volume: Pimping Your Bed With Perfume Cushions 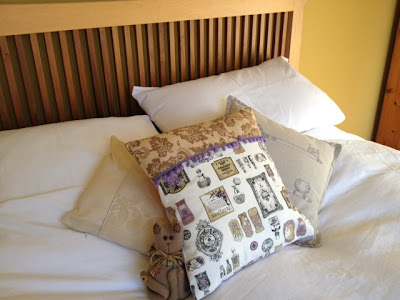 Bedding has come a long way since I was a kid, those distant days of flannelette sheets, scratchy wool blankets and swirly-patterned candlewick bedspreads. Or even the 80s, era of the drawer divan, flouncy valance and Austrian blind. Dearie me - was I glad to see the back of all things ruffly. I can't quite remember when the duvet hit Britain, but we must be talking decades ago. And now, a cursory glance round home furnishing stores like Dunelm Mill reveals that beds are not so much "made" as "dressed" these days - or even "staged". A duvet and a minimum of four pillows (clad in befrilled Oxford pillowcases for preference, the "housewife" style being as dull and outdated as its name) is just the beginning. There are now these heavy, padded quilts that you don't actually spread over the whole of the bed, but rather lay on the bottom half, not unlike a runner on a dining table, more ornament than use. And they're not cheap, these (invariably) shiny bedspreads - or half-throws or whatever you call them - the cheapest I found was about £70 in Dunelm, rising to £200 in Laura Ashley. 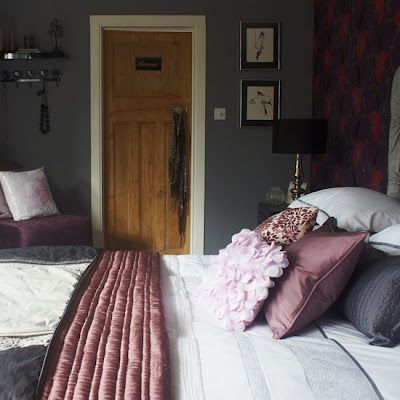 And of course no bed is complete without a final embellishment of entirely gratuitous cushions and/or boudoir pillows, which should be artfully arranged in an asymmetric heap on top of the four pillows. Well, I am speaking of British-size beds here - in the US, where they have "Super King & Queen & President" beds that run the entire length of the room, it might not be unusual to see six or ten pillows in total, so you may need to scale up your cushion quotient accordingly. 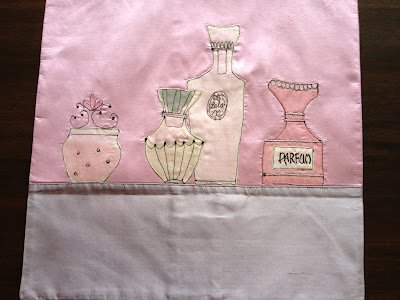 ONE OF TWO CUSHIONS BY THE ARTIST BRIDGET DAVIES THAT SHE HAD LEFT KNOCKING AROUND HER HOUSE (I BOUGHT THEM BOTH!)

Me, I have just five "embellishment cushions" to my name, as I shall loosely call them. I don't think the term "scatter cushions" is correct for a bed: for one thing that sounds far too random, plus I think you only find scatter cushions on a sofa, and even there they would never be as artlessly "scattered" as the name suggests. And of the five cushions I own, THREE have a perfume theme. There were four, but I gave the pink cushion above to Victoria of Bois de Jasmin as a flat warming present when I went over to visit her in the summer. She has moved again since then, so in theory I may owe her another one.

So here is the roll call of my remaining cushions, split across my bedroom and the spare room (with the wrought iron bedstead). 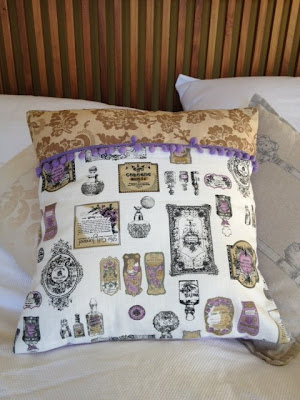 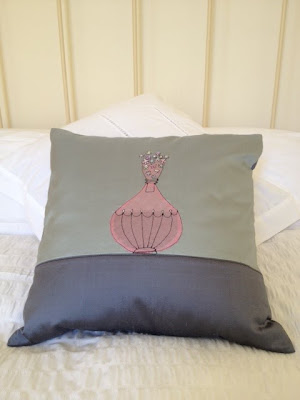 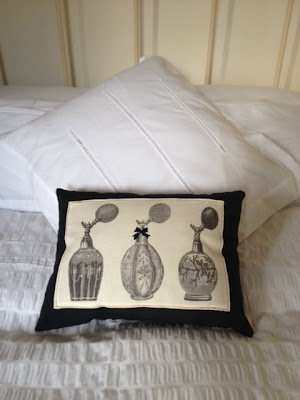 BLACK SHABBY CHIC VINTAGE-STYLE CUSHION WITH LAVENDER INSIDE (FROM EBAY) 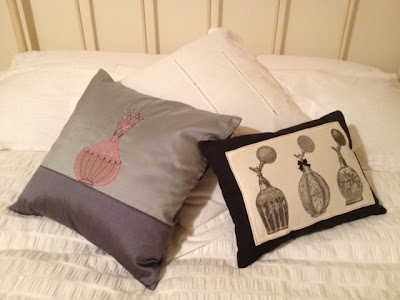 From my research on Google when I was tracking down these cushions, it struck me that there aren't too many perfume-themed accessories around generally, and cushions are no exception to this. In fairness Laura Ashley does have one design, but it is rather wan-looking by comparison, and as with everything else from the range, somewhat overpriced. And though I found some other perfume cushion designs on Etsy and Ebay, they tended to be of that rather cliche'd "Alphonse Mucha pub mirror" variety, if you know what I mean.

Do you own a perfume cushion - or two?

Is your bed pimped up with cushions of any description?

And what other items have you seen - or would you like to see - with a perfume theme to them?

I saw a lovely sponge bag, for example, on bluebellandco.com, but by contrast, drew a complete blank on tea cosies. And given my growing interest in tea pots, that could prove to be a problem, unless I figure out how to knit one!


Photo of grey bedroom from housetohome.co.uk, other photos my own

Cute cushions! (and an instructional angle, as I learned several terms for types of cushions that I was previously unaware of). I think you are quite right about the general lack of perfume-themed textiles around. I think Ari has a perfume-themed dress that is very cute. But when it comes to clothes, I think I'd need to be a lot younger and girly-cuter to pull off anything themed!

Nice cushions! Though it's sooo completely not "me": I do not like most "extras", I prefer only functional things on my bed.

No perfume cushions for me but I love the idea (and need some for a sofa). :)

"Instructional angle", I like that! Interesting that you haven't seen much in the way of perfume-themed textiles Stateside. And I bet Ari looks cute in her dress, but yes, that might be one for the younger generation. : - )

I salute your no-nonsense approach to bed making. No "dressing" for you I see, but I have clearly succumbed to the embellishment trend!

Treat yourself! It is your birthday after all...I have six cushions on my sofa - it is quite low slung and you need a lot to be able to sit remotely off the horizontal!

Really enjoyed this post, V. My sister had a divan bed with drawers in the 80s, I had an Austrian blind and we both had flouncy valances! Do you remember when duvets first came in, people called them "continental quilts"?!

I love your cushions. I bet they fit your decor perfectly. My house is a new-build so my bedroom is pretty modern and wouldn't really suit cushions, as lovely as they can be. I always think of that scene in Along Came Polly where Ben Stiller ends up stabbling the many cushions he puts on, and takes off, his bed each morning and night.

What fun that your memories of the 80s chime with mine! There are some very shiny / chintzy curtains at the top of my stairs that I am sure date from that era - the texture is so waxy it is reminiscent of an oiled tablecloth or a Barbour coat!

I haven't seen that Ben Stiller clip, but it sounds very amusing and I can relate to his feelings - there is an optimum number of these embellishment cushions, and over three is really pushing it!

How adorable! We don't have a properly dressed bed. We just can't do it yet. We spend too much money on exotic hols, as you are well aware. No embellished cushions, or scatter cushions, or decorative ones. Just good pillows and a flannel duvet cover ;-)

Well, your exotic holidays sound like a good trade off for a few cushions of any kind!

Though it is amazing what bargains you can pick up on Ebay if you just fancied the odd one.

Cute cushions! I love coming here to learn all the UK terms for various things - I believe we call scatter cushions throw pillows here in the US. I have no "embellishment cushions" on the bed, perfumed or otherwise. I can barely bring myself to pull up the bedspread on our bed with 2 functional pillows, let alone arrange any extra spreads or pillows!

Nice to hear from you! I will keep the UK terms for things coming if you enjoy hearing them - I could say the same indeed of the many US blogs I follow. "Throw pillows" is ringing a bell now you mention it. You guys also have the rather unusual word "comforter" where we might say "quilt" or "bedspread". I'd say that might be more appropriate for a baby's dummy, which you of course call a "pacifier", though that in itself is a good word for it! And as Tara points out above, we started off calling duvets "continental quilts", I guess because we nicked the idea off the Scandinavians.

I have every sympathy with you as a reluctant bed maker - it is a bit of a nuisance, and the embellishment cushions add to the faff, no question. And I additionally have a resident toy cat, as you can see in the photo!

I'm so lucky to have on of these cushions! Thank you again. It's in my office, sitting on a chair. In theory, I use it to prop up my back. But it's so lovely that I usually don't. Whoever comes to visit goes for the cushion before the perfume bottles. It's been a major decorating success! :)

You are very welcome! I am glad it works with your decor and that it has even become a bit of a talking point. : - )

I also have an office cushion I don't lean back on, haha. It is an Osborne & Little fabric and I worried about it getting creased, so in the end the cushion cover ended up in a drawer and the pad got redeployed.

Prior to that I had a more serviceable black cushion that also doubled up as a driving cushion, however just before Christmas I lent it to an elderly gentleman who was having a heart attack. He had fallen out of his car seat onto a muddy path and his daughter had put her handbag under his head temporarily when I volunteered my cushion instead, thinking a handbag might be a little lumpy. So I say "lent" but I guess I gave it to him really, as I drove away immediately to give the ambulance room to park. I do hope he pulled through, but I never found out.