A Bonkers Round Up Of Perfume Bottle Imagery - Real And Imagined!

Topic advisory - this is a frivolous and palate-cleansing post - the blog equivalent of what my father used to call a "frippery", namely a gewgaw or trinket that was as desirable as it was insubstantial, and on which he used to counsel me most strenuously not to spend my pocket money.  But of course I did, every week, and never lived to regret a single one of my horde of spangly purses and Itty Bitty erasers.   I would call them "rubbers", but I don't wish to cause an international semantic incident.

Now, Olfactoria has a gorgeous series of posts entitled "Finding Hidden Beauty", in which she compiles a montage of photos of aesthetic objects glimpsed on walks around her native Vienna.  Vienna is of course a rich hunting ground for such serendipitous sights - if you walk round Stafford, you are more likely to bump into our hideous telephone exchange building everywhere you turn, though a bit of ferreting will uncover some architectural gems from the medieval era and even earlier.

So this post has some crossover with that altogether more elegant series of Birgit's, though it was finally triggered by the latest of Undina's postcards from her trips away, specifically by a comment made by Jordan River of The Fragrant Man about how he had spotted a heart shape on a hill in Undina's photo.

"I searched and searched the photo, every bush, every blade. When I looked up I saw the heart. Now I can’t miss it. A clever and brilliant composition."

You see, I have quietly been collecting images of perfume bottles spotted in unexpected contexts, and thought that I might now have a small quorum worth posting.  They comprise a mixture of unusual representations of actual perfume bottles AND objects that have nothing whatsoever to do with fragrance, but where I discerned a perfume bottle shape, much like Jordan with his hillside heart.

So, starting with the actual and moving through to the imaginary(!), here are the highlights of my collection to date. 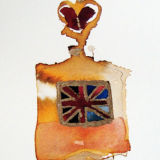 These quirky watercolours of patriotic perfume bottles are by Bridget Davies, the artist behind my perfume-themed cushions, the topic of a previous post. 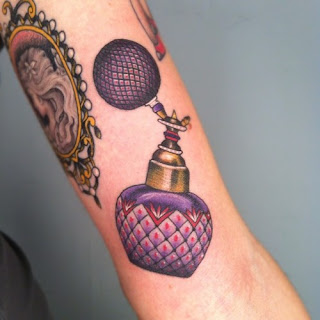 And here is a tattoo by Brooklyn-based John Mohawk, featured in the tattoo magazine "Things and Ink".  I think as tattoos go - and Freddie of Smellythoughts can confirm - this one demonstrates exceptional artistry.  I wouldn't want to spring for one myself, but it is pretty spectacular by any yardstick.


My heart leapt when I spied these cute knitted perfume bottles on Basenotes a while back - I am not clear whether they are actual perfume bottles wearing knitted jacket facsimiles of their bottles, or whether the whole thing is knitted, maybe with some stuffing inside.

And ooh look, here are some crocheted ones by artist Kate Talbot, who came up with the idea as a clever way of illustrating cosy "cashmere wrap"-style scents for an article in The Stylist magazine:


Speaking of erasers, there are even ones shaped like perfume bottles - admittedly in an assortment of rather garish colours, but the thought is there at least.


Next up are a few pictures of imaginary perfume bottles, starting with my friend Lizzie's earring:


And finally, a series of "salt bag" rugs from Persia.  Apparently shepherds carry rock salt to feed to their sheep. There are certain times of year when shepherds need the sheep to drink and retain more water, which of course salt encourages them to do, much like pub owners putting bowls of peanuts on the bar.  For a full account of sheep migration patterns and the whys and wherefores of salted and unsalted flocks, there is a helpful explanation here on this persian carpet website.


This one below is shaped a bit like a Ferre, wouldn't you say?

And what about this one - do those horizontal lines not remind you vividly of the stripier end of the Paul Smith range? 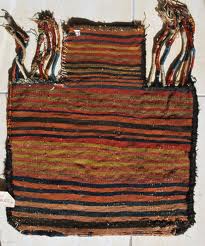 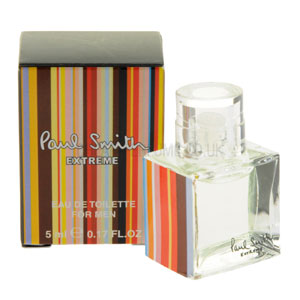 
Oh, and would you believe I still have a spangly purse - bought in the last 15 years no less, whatever that says about me.

I would be very interested to hear of any other oddball perfume-themed artefacts or imaginary perfume bottles you may have spotted, so please feel free to email any pictures to me at flittersniffer at gmail dot com.  If I gather enough in, some day I will run another selection of "reader finds" plus anything else I come across in the meantime!

Photo of Stafford's telephone exchange from geograph.co.uk, photo of Ferre bottle from talkingperfume.com, photo of Paul Smith bottle from cheapperfume.co.uk
Posted by Vanessa at 16:46

Very cute images! Love those woven bottles. And I love Vienna! Gorgeous place, I only wish I'd had more time there.

That tattoo..... my God, artistry indeed. What detail! Very impressive and original, as far as tattoos go.

The salt bags are fun, aren't they?

Vienna is a gem for sure. I have been fortunate to visit it for work at different times of the year, but always with some downtime to amble and see the sights. Favourite visit has to be my very hot meet-up with Birgit the year before last!

Yes, tattoos are not my thing, but that looks like the ultimate you could have in terms of intricate handiwork.

Well, perhaps this post might prompt you to keep an eye out in future for perfume bottle-shaped entities - on your runs would be the ideal opportunity... ; - )

The crochets are my favorites--such a contrast in materials from wet, glass-encased to dry, pliable.
I can't think of any unusuals that I've seen. Some unexpected cameos in films (so many dressing tables) and art shows (Louise Bourgeois Shalimar bottles that I saw in person I think at Storm King, , and that wonderful Man Ray/Marcel Duchamp "Belle Haleine/ Eau de Voilette ", which I've only seen in photos.)

And though I've never seen one "in person"--google image Chanel No 5 Birthday Cake. Some very creative cake designs!

The crochets are my favourite too - there were a few more where they came from. I think the artist is so clever to have made them - the way I always admire the makers of dolls house furniture - such workmanship with tiny details.

Now I had to google the other exhibits/artists, not having heard of Louise Bourgeois and only being dimly aware of the others. I am now up to speed, but by a curious coincidence, it turns out that I have in fact seen Louise Bourgeois's work and didn't realise it was by her, namely this spider sculpture at the Kemper Art Museum in Kansas City. Small world!

I also clocked some great Chanel cakes in Google images, just as you said...

Vanessa, I have to ask: how exactly did you come across that tattoo in the "Things and Ink"? ;)

The only unusual perfume-related thing I came across recently was a purse by Charlotte Olympia (well, three of them - Pink, Yellow and Blue. Though with those prices I don't even have to talk myself out of spending my "pocket money" ;)

I actually came across a different image of a perfume bottle tattoo originally - can't recall the circumstances exactly - it was on a style blog or maybe even a link from some crafty person on Etsy. So having discovered the category of 'perfume bottle tattoos' a long time ago, at the time of writing this blog post I set out to find a slightly nicer image, and googled this one. :-)

LOL about those purses being beyond the reach of your pocket money!

Lovely!!! I love this post almost as much as the one about things on poles! :)
The way you spot these things and generally the way you see the world makes you sooo endearing. xoxox

Lovely to hear from you - I know you often have problems with Blogger, so thanks for persisting!

Glad you enjoyed this collection of 'perfume quirk' - I am not sure that is a word, but never mind. I do wonder where my head is at sometimes, so it means a lot to have your encouragement to carry on down the odder byways of Perfume Land...