The box that keeps on giving...The tale of the poet, the painter, Undina and me 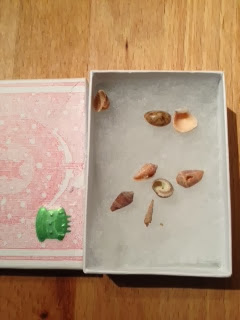 Now I do have a number of 'proper' review posts in the pipeline - as ever, I use the word 'proper' advisedly, ditto the term 'review' for that matter - but I am in the middle of a manic work phase, compounded by a cold of epic proportions, the ongoing sprained hand and a chipped tooth.  And my iPhone isn't feeling too clever either since I poured tea on it the other day, and only emits sound on an erratic and occasional basis.  All of which preamble is by way of saying that I can only manage short snippety posts at the moment, so please bear with me.  'Bear with me' - such a horrible overused phrase these days, and there I go using it. Too busy to bear with myself long enough to think of an alternative...!

Anyway, I did want to share a surprising and rather sweet tale that happened the other day, when I popped round to my artist friend David's house to deliver his birthday presents - to wit a bunch of drying bay leaves, five lukewarm falafel balls wrapped in tin foil (not homemade), and two Wedgwood teacups and saucers commemorating technological milestones from the last century.  The usual sort of stuff you give a bloke, basically.

As David was making us a cup of tea, I spied a box on his kitchen work surface containing a collection of tiny sea shells, nestling on some kind of foam layer.  The box looked instantly familiar...

"Wow", I exclaimed, "I had a box just like that!  A perfume blogger in California sent me some samples in it a while back.   I distinctly remember the little green cake thing."

David explained that our mutual friend Lizzie - poet, teacher, and owner of these unintentionally perfume bottle-shaped earrings - had given it to him.  She wondered if he might fancy doing a picture featuring the shells, though in painting terms it might only have been one step up from writing the Bible on a grain of rice. The mention of Lizzie instantly reminded me of how I had recycled the box sent to me by the perfume blogger in question (who was none other than Undina of Undina's Looking Glass), and used it to transport two vials of Vero Profumo Mito that I had bought for her at Bloom Perfumery in London in July.  I popped the box with the samples in through Lizzie's door in August, having finally established that she was away for much of the summer - it had previously spent a number of weeks sitting in a dish on my hall table.


So there you have it - in four degrees of separation (Undina - me - Lizzie - David) Undina's box turns up unexpectedly in a friend's kitchen, forging a touching and piquant link between the perfume scene and my regular pals in Stafford.

And David is very eco-minded, so I have no doubt that it still has a few more miles left to travel...

On a related theme, this post from the early days of Bonkers explores the notion of well travelled sweets in perfume swap parcels, not to mention the unwanted extras that circle the globe looking for an appreciative home.

And before I left, David sportingly allowed me to recycle something else, namely a painting of a statue's feet in a cemetery in Barcelona.  I have owned that picture for nigh on 20 years - and it features in a review I wrote about Carner Barcelona D600 - but I fancied a change, and have swapped it for this one of a Persian rug and a tulip. 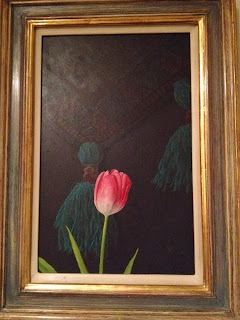 What can I say, my box is clearly a much more well-travelled than I am ;)

I went to the D600 review and remembered why I didn't comment on it: I'd spent probably about an hour back then trying to find "your" statue, didn't succeed and then got distructed by something else.

A lot of work is much better than nowork at all (not sure who I'm trying to persuade - you ormyself ;) ). Hang on in there!

My inspiration for this tale and another person currently in a manic work phase...;-). I am trying to tell myself it's a good thing!

How nice of you to have gone off hunting for the statue - it really was a hopeless quest - no wonder you got distracted. Maybe I was bugged at some low level that the painting had beaten the researcher in me...which is my job after all. ;)

Ah, that's a nice story and I love that tulip painting. It must be nice when you get that crossover with friends from different areas of your life.

I really hope the minor injuries are all behind you now. The rotten cold/flu was more than enought to deal with while working so hard.

It's funny, my work colleague says "Bear with me" every time she puts someone on the phone through to me and it grates on me every time. Maybe I should have said something about it when she joined but it seems so petty.

Yes, it is a nice crossover and seems to be happening more and more - as in introducing my friends to niche perfumes, which is ongoing, then specific coincidences like this one or finding out that Cookie Queen of APJ was also a Monochrome Set fan. ;-)

The hand is still painful, would you believe, but only when I try to use it - or accidentally hit it, as has been known! The cold is lingering, but I feel a bit more on the ball this week, and have slightly less work to contend with, which is good.

Oh, I collected a parcel from the PO sorting office the other day and there was a queue of people in front of me. For every one who handed in their red card the clerk said: "Just bear with me a moment" and went to look for it. It was incredibly annoying, I don't even know why!

Ha ha! I know. I think maybe because it sounds kind of over the top. All they need to say is something like "Just a moment". Why do we have "bear with them"?!

Glad this week is going better for you and it's the tail end of the cold now. Too bad your poorly hand is taking such a long time to recover though.

What a journey the box has been through! You should probably attach a tracking advice to it just to see where its travels bring it! I hope you and your iPhone get well soon! (just to cheer you up, my Samsung fell into the toilet bowl last December and can never be revived since then!)

I have been giving this some thought and I reckon the niggling thing is exactly what you say ie the fact that the response 'bear with me' is OTT. You bear with a person who is being incompetent or struggling to do something in some way. And so we end up having to bear with them for deploying such an irritating phrase so often - therefore I suppose you could say it is a self-fulfilling prophecy. ;-)

Tracking device - what a fine idea! I would love to monitor the box's next move...I am afraid I am not too hopeful that my phone is going to find its voice again, and your experience doesn't fill me with confidence, it must be said. ;-0

haha- nice story! And of course as it happens while reading your post, I keep looping back, clicking on links. But thought I'd say hi before going too far back to find my way back to comment. :D
I am caught up with work too..also I still need to send you that package..

I quite understand the busy work thing. Undina herself is in a similar spot at the moment.

Sorry about your package too. With Christmas only a month away, we might be better handing over the contents of our parcels in person! What do you reckon?

Oh no problem. In person sounds good! :). I am leaving this week to India so I better get to it quickly!! :D