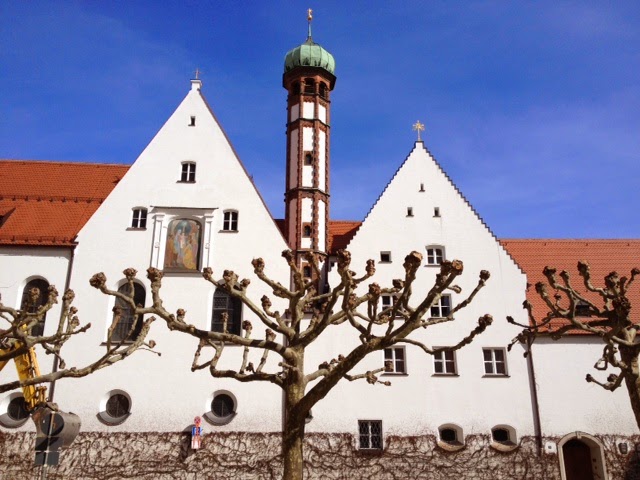 For anyone with the capacity for more 'band on tour'-style travel trivia, read on - this is the report from the middle section of the itinerary - I have had to split it into three parts!  For anyone else, there will be a perfume-themed post from the trip along soon, plus a report on Neil Chapman's talk on vanilla scents at the latest Perfume Lovers London meet-up...

While we were in Hamburg, a glowing review of the Monarch gig appeared in the online version of Die Welt, a German broadsheet newspaper based in Berlin and comparable to the UK's Times.  In a happy turn of events, Frank Schmiechen, the deputy editor-in-chief of Die Welt, was in the audience and felt moved to write about the show. By Wednesday morning, his review had also appeared in the hard copy version of the paper, occupying some two thirds of a page in the Culture section.  The photo used was a few years out-of-date, mind - anyone coming along to a gig and hoping to see a male keyboard player in a red velvet dress would have been sorely disappointed. 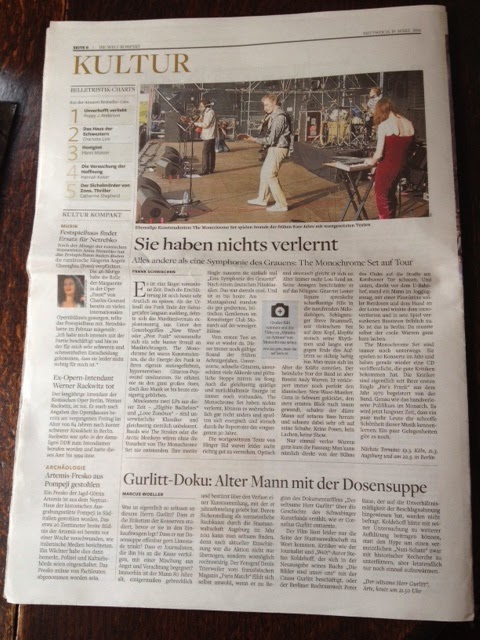 Before we set off for our next destination of Cologne, I volunteered to buy a job lot of Die Welts so that everyone could have their own souvenir copy. Any brownie points I earnt by legging it to the newsagent's at the station and carting off armfuls of the compact version were quickly offset by my treading on the drummer's toe, and nearly poking our entire party's eyes out with my knitting needles, which were casually sticking out of the top of my rucksack.  The dodging of sharp objects was clearly going to require constant vigilance on this trip.

The venue in Cologne (King Georg) was a cosy and wonderfully retro 60s cocktail bar, all done out in pink, with leather banquettes and a stage 'in the round'.  Jane took a complete set of photographs that she conceded would only appeal to people with a fetish for right ears.  I managed slightly better from where I was standing, but it was still a stupendous feat of geometry to incorporate all four band members in a single shot.


I spied another dog at this venue too, sitting on the counter by the entrance - one of those sweet shitsu-type breeds at the opposite end of the size spectrum to Hamburg's labrador(?).  I remarked on this recurrence to the bass player, who replied in a deadpan tone: 'Yeah, I know - dogs are on the rider.'  Also worth mentioning is the fact that the walls of King Georg were clad in wood panelling, while I was wearing shiny black trousers. These had served me well in Hamburg in the 'coordinate trouser fabric to wall covering' game, because it was so dark there that the walls could have been shiny black for all any of us knew - and I was generously given the benefit of the doubt - but Cologne proved a textural challenge too far. 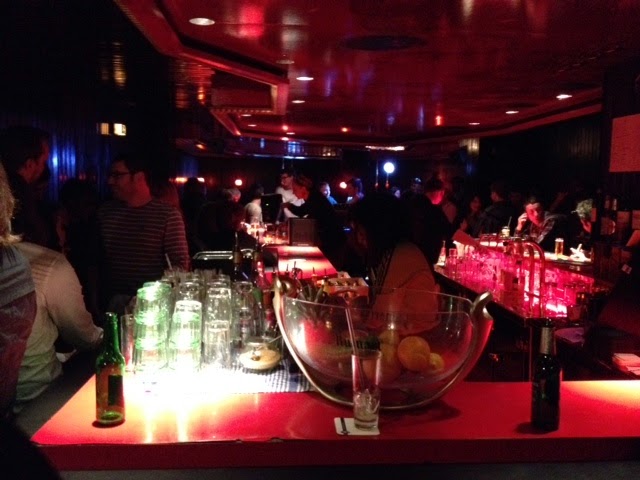 The next day, in a bid to make myself useful at the train station again, I went to buy tea for the bass player and me in a nearby McDonalds.  Slavishly following the sales assistant's outstretched finger in the direction of the milk and sugar, I walked smack into a glass wall, spilling about a quarter of the tea over my hands, and scalding myself in the process.  The bass player was most gracious about being shortchanged in this way, and I made a mental note to pick up a couple of lids next time.


Exceptionally, our whole group was staying in the next hotel in Augsburg - for the first night at least. Formerly a nursing home, the Grand Hotel Cosmopolis has undergone an extensive conversion and is now part quirky art hotel, part social project.  For the first three floors of accommodation are reserved for asylum seekers, while the top two consist of individually designed bedrooms showcasing the work of local artists. The rooms are not en suite, however, as such modern amenities would have constrained the eclecticism of the room designs. ;) I took to using the bathroom on the top floor though, to minimise the risk of bumping into band members using the facilities on the floor I was on.  Even so, I opened my door a crack the next morning only to hastily close it again, having glimpsed a man in pyjamas just feet away.  This brief sighting was later confirmed as the bass player, hanging out his laundry on a communal balcony.


The top floor bathroom deserves a special mention in fact for its unique 'usage instructions' - these were painted on the wall by the shower in cursive script, and went as follows (I am translating loosely):

1. Please do not turn the hot tap all the way, or the water will go cold again.
2. We are high up here and the hot water takes a while to come through - please be patient!

And then the kicker, assuming you had managed to comply with 1 and 2:

3. We wish you a successful stay in the bathroom. 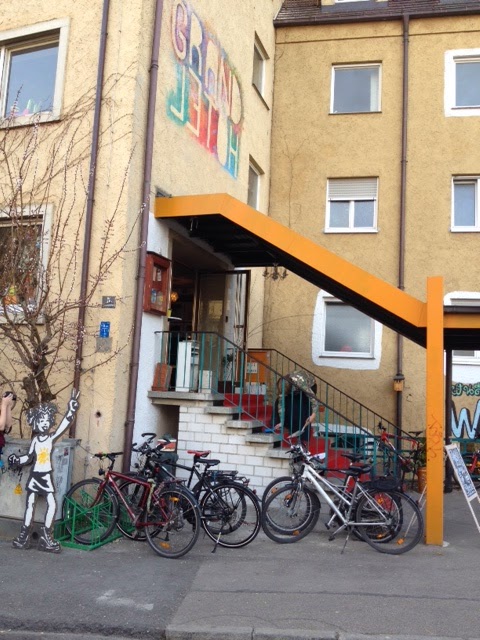 In all my years of travel for business or pleasure, I have never seen a sign like that.  I did manage to coax the hot water out in the end, but I sense that a non-German speaker's stay may have been less successful.

That Thursday was technically the band's night off, but the support act (the very wonderful Friedrich Sunlight) had invited us all to a 'secret gig' in their rehearsal room, to which they had invited all their friends - so not so very secret then ;) - and those of another local band, and everyone ended up playing a short set. The space in question was not unlike a youth club or community centre, and was notable for its juxtaposition to a Vileda trade outlet, Vileda being of course the Rolls-Royce of squeegee mops and dusters.

I will not make any silly comments about my stays in bathrooms! ;)

Haha - they can be minefields, it's true. ;) Many's the time I have been foxed by a foreign shower mechanism - they should all come with instructions on the wall, preferably in several languages!

A man in pyjamas is still properly dressed. I'm surprised you didn't see anyone naked. We do drop our clothes rather easily...

Haha - I must say the fluidity of the toilet demarcations (gender / absence of doors) was a little disconcerting. ;) In the dropping clothes stakes, the Finns are pretty 'out there'. Or maybe Scandinavians generally?

Love the look of the pink girly room. It looks very cheerful. :)

Cologne is supposed to be a very scenic city, isn't it? I'd like to visit one day.

Love the 60s cocktail bar and the artsy room. A shared bathroom would never do but I guess the pillow/shoe on the ceiling (from your FB photos) would be some compensation.

It was a lot of fun, and so many wacky little things to look at - everywhere you turned in fact. I will put up some more pics on Facebook I think...

Cologne has a magnificent gothic cathedral (or 'Dom') and some Roman ruins and a quaint old town. A good art museum too, where that painting I put up on Lavanya's beauty post is kept!

That said, for some reason it isn't one of my favourite cities - probably because I associate it with difficult work projects - there's a lot of chemical industry in the area, for example.

I agree that I do like my own bathroom, and this hotel was an exception on the tour in that regard - but it was rather a memorable place all the same, and I am glad I spent one night there before relocating to the Intercity by the train station!

If I ever go to Germany I hope it's with you, V. Maybe one day we could visit First in Fragrance and ransack their sample wall!

I would love to go with you to Germany - there are still parts I would like to explore and others where I would happily return. Funnily enough, I have skirted round the town where First in Fragrance is, but never actually been there. Hmm, you have got me thinking now where else is scenic in that neck of the woods...

Co-ed bathrooms are a little too much for my comfort zone. But other than that - interesting hotel.

I think it was a little too much for my comfort zone too ;), though worth it as part of the overall 'art hotel' experience. I wore a strange combination of coat over pyjamas to go to the bathroom. In fact I never met a soul in any of the shared facilities, but there is always that nagging feeling that someone might come in at any time...