Aldi versus Ladurée - a mini-macaro(o)n throwdown! 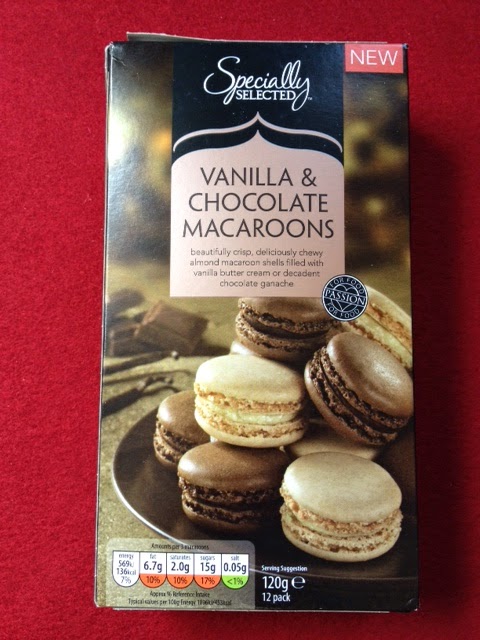 As readers may have noticed, I have written a lot on the blog over the years about the European discounter Lidl. I used to call it a grocery chain, but the non-food lines are so extensive now that I am hearing it referred to simply as 'discounter', which covers a multitude of Spiderman 2 Merchandise T-shirts, electric hard skin removers, lightweight 2 man hiking tents and quail eggs - oh sorry, those are edible! These are just a few of Lidl's specials this week, not forgetting its 'upgradable' Easter bunny planter, a steal at £3.99 for the small size.

And for those of you not familiar with the European retail scene, Aldi is Lidl's fellow-German counterpart, with a very similar business model.  Indeed Aldi has been trading in this sector since 1946, while Lidl - which set up in direct competition - dates from the early 70s. There's a branch of Lidl in Stafford, but my nearest Aldi is about five miles away, meaning that trips there are less frequent, though equally rewarding.  I fill my basket to overflowing every time - not skimping on items from the store's 'Specially Selected' premium range - yet find it nigh on impossible to spend more than £40.

Aldi hasn't gone down the 'knock off' perfume route like Lidl, but it has been lauded for its range of skincare products, Lacura - indeed, in the wake of this article, I think I need to pay the store another visit and stock up on their latest selection of miracle moisturisers.  Well, miracle at the price, it would seem.  I may even review them sometime, in a bid to shore up my flagging eBuzzing Beauty rating. ;)

Now the last time I was in Aldi my eye was caught by a frozen patisserie item, namely a box of 12 macaroons for £3.79! How strange that before my recent visit to Ladurée in London, my awareness of macaroons (with or without the extra 'o' - I will try to preserve the distinction ;) ) was nil to negligible, and I have now had TWO meringue encounters in as many weeks nearly! Obviously I had to buy the packet, even though chocolate and vanilla are not my favourite flavours.

When I got home I defrosted one macaroon of each kind, and in no time was sampling them both with a cup of tea. They were a little smaller than the Ladurée ones, so I wouldn't have attempted to cut them into four, as we managed to do in Harrods so we could all taste each variety.  So how did the Aldi macaroons compare?  I should firstly mention that in their current amusing and quirky TV ad campaign, Aldi really hammer home the message that their own label foods are every bit as good as brands. When it comes to macaroons, however, I am sorry to report that they haven't quite cracked it - though in fairness Ladurée set the bar very high!

The chocolate macaroon from Aldi was the better of the two: it had a nice chocolatey flavour, and was chewy and slightly creamy, while the vanilla one didn't taste remotely of vanilla, was less creamy and the overall 'mouthfeel' (can you tell I used to work in the food industry? ;) ) was more dry and powdery - to the point of sawdusty even.  I will enjoy the rest of the chocolate ones, but the vanilla were a big disappointment.


And now comes the monetary calculation.  The Ladurée macarons were £2.10 apiece from memory, while the Aldi ones (albeit smaller) work out at about 30p each, rising to 45-50p tops maybe if the size differential were factored in - and none of this is meant to be particularly scientific!  Soooo, are the Ladurée macarons about 4 times as nice? That's a really difficult question - I would struggle to imagine how the Aldi macaroons would actually taste if they were even twice as nice.  And off the bat I'd say that 'four times as nice' sounds a big ask of the Ladurée ones to justify their premium.

Hmm, how about putting the question another way...would I buy the Aldi macaroons again?  No.  Would I spend a considerable (veering to indecent) amount of money to have tea and a few macarons at Ladurée again?  A resounding maybe!  So I make it that Ladurée wins the throwdown by a creamy, chewy, smidge...

I would unreservedly recommend a shopping trip to Aldi generally, mind, especially if you are in the market for any of their current specials, which include 'technical softshell jackets', 'fishing ruckstools', '2 litre hydration bladders' and 'Sport armbands for smartphones'.  Or two mangos for a quid, a creditable imitation of Special K cereal with red berries, and some very cheap nuts!

I love Lidl... Their "premium" red wines are really very good - generally any bottles that they have displayed laid down rather than stood up. I have to admit to not actually liking macaron/macaroons very much at all so I'll happily take your word on the comparison!

I have only been to Aldi's once or twice in my life - I need to check them out again. Thanks Bonks!

How are you?! Great to hear from you again. ;) I will bear that tip about *recumbent* wines very much in mind. My brother - who is a bit of a wine buff - has praised the wine selections of Aldi and Lidl, but I don't know which bottles in particular.

Re macaroons - I swear I was indifferent to them till I tried the ones in Laduree. They are in another stratosphere of deliciousness, even if you aren't into meringues whatsoever. Trust me on this - I was the most surprised convert!

Do have another nosey in an Aldi if you get the chance - there is something for everyone - and occasionally quality wool!

This was so much fun. I'm glad your first experience of a macaron was the very best. At least 4 times as good I'd say (without even trying the Aldi ones). I bought the M&S ones and they were a disappointment too. It's Laduree or bust I'd say - or Laduree AND bust more like.

BTW I heard it should be spelt macaron because macaroons are those coconut whatsits.

Oh and my Mum was extremely happy to announce on the phone today that we are having a Lidl turkey for Easter :)

Yes, it has been downhill so far since losing my macaron cherry in Laduree! LOL at Laduree AND bust - so true, sadly, but so worth it...especially if you chop the things up into sharable bits.

Thanks for clarifying the differences between the two spellings - I sense it is a very fluid area in people's minds and that macaroon will continue to be a catch all term.

Good on your mum for stocking up with a Lidl turkey. My Christmas turkey crown was excellent, I must say.

I fear my macaron loving self has also been compromised by Ladurée and I agree with Tara ist that or nothing. The only close ones were Fortnum and Mason's who offer a great variety and weigh in at 1.50£. A huge saving compared to the 2.20£ of Ladurée. The Austrian varieties (even those from reputable pattiseries) just can't compare. :(

Here in Ealing we are awash with Lidl but the nearest Aldi is miles away Hatfield is nearest I think, and I would say it is not one of the better branches - very dark for some reason, like shopping in an underground carpark. I do look forward to them braving the stupidly high rents and venturing into the capital. I salute you for testing the bargain macaron - Paul the French bakery chain do nice, crisp and chewy ones, not as adventurous in the flavour dept. nor anything like as elegant as the Laduree but bigger and a bit cheaper. You can't beat the full on Laduree experience though for a proper treat.

We usually shop at Lidl, but go for Aldi when we want:better wine, razor blades and skincare. Makes for a funny looking trolley. I've never tried their macaroons and don't think I am tempted after reading your review. I do make them from time to time but it's a lot of work.

Hey Bee, I'm just butting in here because I also live in Ealing and understand my nearest Aldi is in Kingsbury. Not sure if it's much nearer than Hatfield but possibly less like an underground carpark.

I was most interested to hear this comparative intelligence about the Fortnum & Mason's macarons - that is a significant saving so I would be curious to try them at least. But maybe Laduree will still turn out to have the edge...;)

Sounds like Tara has some key info re a closer and more salubrious branch of Aldi. I can imagine that Paul would do a creditable version of macarons. I first came across them in Belgium I think and loved their croissants and crusty loaves. Sounds like you are another diehard Laduree fan, mind. ;)

Thanks for that Aldi tip for all Ealing dwellers, even if it is only slightly closer. Sarah McCartney is another one of course - Ealing dweller, I mean, not branch of Aldi.

Your inner German doubtless feels at home in Lidl - I certainly feel nostalgic when I go there! I think it may have been the Aldi wine that my brother particularly rated, but I can't recall. LOL at your eclectic trolley contents - mind you, based on their specials advertising, it is something of an occupational hazard for shoppers there!

And no, I shan't attempt to make macarons any time soon - with or without the extra 'o'.

Hi Vanessa, thank you for your blog, the usual and daily Aldi-Lidl competition is quite present here in Germany as well, they compete in almost every detail with each other. It feels like two teams of elderly male germans neighbours who are so mad at each other that they will spend the rest of their retirements throwing dirt at each other :-)

Unfortunately, there are no macaroons in Aldi nor in Lidl here in Germany, maybe the macaroon trend will also arrive here one day: then surely Aldi and Lidl will also hop on it...

I don't think they sell macaroons in Aldi here in Spain either. :( I don't know if you have them in the UK Aldi, but Chateau chocolate (nutty crunchy white choc is great) is nice!

I like your analogy of 'elderly male German neighbours' chucking dirt at each other as a sort of sport in their retirement. ;) You have no macaroons in Germany? Interesting - I visit the country quite a lot but in fairness until my experience at Laduree recently I was never looking out for them over there. Happy to eat Erdbeertorte and Apfelstrudel for ever and a day.

Glad to be of assistance - get down there quick before they are all gone...;)

Interesting to get both the German and now the Spanish take on the macaroon situation in Aldi, so thanks for dropping in. I will look out for that Chateau chocolate on my next visit to my local Aldi. It sounds delicious - white chocolate is my favourite sort!

I think Laduree macaroons (sp) are worth the 4x premium for the experience. They are a luxury meant for special occasion. When I visit Paris or London - I always stop in for the special treat.

Another ringing endorsement for the premium macaron - thanks!