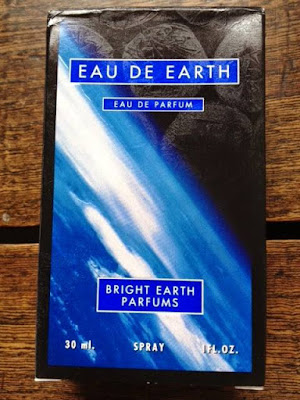 In my recent review of Bright Earth Parfums Eau de Earth edp, I explained that I was disappointed by the look of the box, whose electric blue colour and bold graphics was to my mind a 'striking match' for a packet of cigarettes, and also reminded me to a lesser extent of a pack of playing cards or a boy's toy or game. It certainly didn't compute in my mind as packaging for a women's fragrance - let alone one that was supposed to exert an aphrodisiac effect on its wearers, as Undina reminded me in her comment:

For the record, the sales copy on the Etsy site where the perfume is currently sold appears to have been toned down, and now reads:

"A subtle explosion of pleasure through the senses
Mysterious and Enchanting, EAU de EARTH
reimagining the power of Nature! and women!"

So no more references to "love elixir" or "taking you where no woman has gone before". Well, I am glad about that, but am still wrestling with the non-perfume-y connotations of the box.
.
In the comments to my previous post, a couple of (female) readers remarked that the Eau de Earth box looked like condom packaging, which I must say had not occurred to me, though I can see the resemblance now it has been brought to my attention.

I raised the issue of the masculine leaning packaging with Nicolas, the owner of Bright Earth Parfums and nose behind Eau de Earth. He said that it was too late to change the box now, and encouraged people to view its design with fresh eyes - his sister had described it as 'avant-garde'.

"How about you look at the box with your imagination turned around, you wake up and you say to your self, hum that box is indeed interesting, no more smoking playing video game, it is an unusual view, very home it is!!!"

I am afraid I remained unconvinced that people would be able to make this imaginative leap, and to gather further feedback I decided to host a mini-focus group amongst my 'civilian' friends on Facebook. I initially invited just men to take part, but a number of women piled in once the discussion had got underway:

"Okay, so this is for men only, and only for men who have NOT read my blog post about this perfume. Which I am confident will be most of you. You don't have to be particularly keen on cologne or anything, just an occasional user is fine. I am undertaking some genuine market research for the company behind this packaging, and the question is quite simply: 'If you saw this box, what would you think was in it?' Please assume you can't read the lettering, but can only make out the image / general design of it."

Well, I say that I asked people to pretend they couldn't read the lettering - one respondent helpfully went that bit further in terms of scientific rigour:

"Took the image, blurred the writing, printed a copy, and showed it to the four guys round to play a wargame today. So the sample is geeks aged 49 to 64."

Hmm, it may be that the demographic bias towards gaming geeks slightly offsets the conscientious anonymising of the box. I am still impressed by his attention to detail though. ;)


Right...I have since gone back and analysed the results - multiple answers were allowed - but from the men only. Views were either expressed directly on my Facebook wall, or in some cases were relayed by their womenfolk.

Here are a few comments, to give you a flavour of the lively discussion that unfolded:

"It does look like a bad johnny packet...or some shocking fags, maybe imported from Russia to impress the vulnerable."

"...rubber johnnies...or if not them, definitely something very cheap and subpar. Sorry to your client but that is one ugly piece of packaging."

A couple of wags jumped in with additional concerns I hadn't anticipated:

"I would be worried if a packet of condoms had the word 'spray' on it."

"It's rather concerning that there is the potential to mix up razor blade and condom packets."
"Both are found in chemists..."
"Hmm, enormous potential for confusion."


Then the other weekend, I was visiting a friend who is a smoker, and noticed a packet of Pall Mall cigarettes on a table, and was instantly reminded of this exercise. Ironically, he didn't even think of cigarettes himself when I asked for his take on the box - his comment was:

And of course no poll-type post would be complete without an Undina-style graphic. Not up to her standard of rich functionality, perhaps, but my best effort. 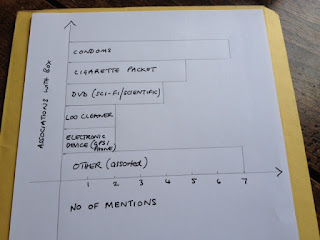 Oh my, I hope Nicolas can stomach this information. I would say that in general the indie perfumer who has to do everything him/ herself is obviously at a disadvantage. Many would benefit from someone from the outside who has more of an eye for sales to find someone to do the right design. But then, that's all more expensive that doing it yourself, and also I feel difficult for the individual perfumer to let go of their 'babies' and trust others to do the visual part.

He is aware of all these associations, yes, if not the actual comments. To be honest, this is the only example of a perfume box that I can think of that really didn't look like what it is intended to be.

Maybe prospective purchasers will think outside the box - or beyond it, say - as it would be a shame if this perfume didn't find its market because of the packaging.

I'm not a packaging expert, but at least I am a graphic designer and perfume geek. Point him towards me if he is interested. This needs fixing.

It is a shame that Nicolas says it's too late to change the packaging. I hope if it does well, he can go to someone like Sabine to give it a radical makeover. On something like Etsy where you can't smell the product, the packaging has to be more important than ever. Glad he toned down the "love potion" copy though.

Brilliant comments from your civilians and I love how that one guy did his own sub-focus group. Plus excellent analog graph!

Appreciate your offer - I do fear the current design of the box will be a stumbling block for people.

That's a good point about the disproportionate importance of packaging on Etsy. I guess that if the perfume does well, you could argue that it doesn't need a makeover, but the question remains: 'How much better might the sales have been in a more conventional looking box?' But personally I would rethink the design at the earliest viable opportunity.

Yes, I was impressed by the guy who took it upon himself to run a focus group within a group. And even though it was rather biased to geeky types, if I had added in all the comments from women on FB, the condom association in particular would have been even more resounding.

I have to say that it's a little be concerning that some of your friends recognize elephant poo on a picture (yes, I had to check - and now it's all I can see; can I have my condoms association back, please?)

Haha, you were the trigger for this post in more ways than one. I have also retro-added a link to one of your stats posts in the unlikely event of anyone not being familiar with your own graphics.

Elephant poo in space - that is a disturbing image, no question - and one that I would also like to unsee...!

It's a pity that it's too late to change the package. I have to say, the person who said elephant poo in space has a very creative mind.

'Creative mind' is one way of putting it, certainly. 'Florid imagination' another! That was a comment from an old colleague of mine, whose sense of humour is a bit 'out there' - in outer space, or thereabouts. ;)