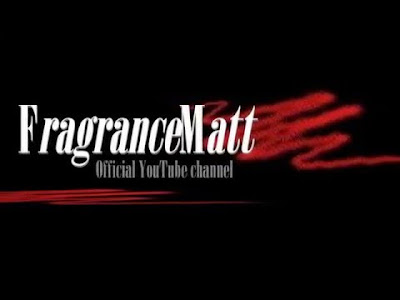 Regular readers are aware that I have three main themes on Bonkers: perfume, make up / skincare for 'mature problem skin' - well, some might argue that its being mature is a bit of a problem in itself ;) - and my travels, including business trips abroad and tours with The Monochrome Set. So music is a significant sub-plot on the blog, you could say, which is doubtless why I was recently fascinated to discover a 'card(ed sample)-carrying' perfumista with his own fragrance review channel (@FragranceMatt), who also happens to be the lead singer of Palladium. I should point out that Palladium is a progressive rock group, not a 'light metal band' as you could be forgiven for inferring from the name...;)

Now as with bell bottoms, smocks, vertiginous platforms, and little strawberry and snail patches applique'd onto my jeans, I feel I have done prog first time round. I had vinyl albums by Genesis, Yes, Pink Floyd and Tangerine Dream in the 70s, and am mostly into other genres these days. However, I think it is great that Matt and his bandmates should follow their musical muse regardless of fashion - and after listening to a few of their tracks on YouTube I can confirm that Palladium is still the real deal in 2016, if prog is your thing.

Here is a link to Palladium's album, Beyond the Red Curtain:


To explain how this all came about, Matt initially approached me on Facebook. I was flattered by the friend request, as it was clear from his fresh-faced avatar that I was old enough to be his mother, not that age matters really in Perfume Land. Matt's mum does in fact appear in some of Matt's fragrance review videos, most recently one in which he reviews Chanel No 5. (I might even be older than his mum, come to think of it. ;) )

Anyway, shortly afterwards I had the idea of inviting Matt to take part in a questionnaire to be featured on Bonkers: with questions that would be partly about his band, and partly his love of perfume. He agreed straight away, and had the bright idea of answering my questions in a YouTube video. It sounded like a good plan to me, as it saved him an awful lot of typing for starters, plus you will get more of an idea of Matt himself 'in person'.

So without further ado, here is the video he made!


So there you have it - Matt is that very rare bird of a fully formed fumehead-cum-musician, while my favourite band are still very much a work in progress. (More on that topic in a later - possibly even the next! - post.)

Oh, and the 'M' stands for Michael. Obviously I had to ask.

How freakin' fantastic is Matt??! What a natural in front of the camera and how great that he really owns his tastes. Thoroughly enjoyed him talking about his music and love of fragrance. More power to him and the band.

Wait, the M stands for Michael and not Matthew?

He is great, isn't he? Not many people of his generation are into prog so power to his elbow, I say!

Ah got it - of course. I was thinking of the M on the wall!

Ok, now I have to ask: where do you put the stress in your last name? (because all that time I was saying it in my head not the way Matt does) :)

On the first syllable...like 'button' and with a similarly pronounced 'u'. Also as in 'fuss'.;)

I see... Sorry for butchering your last name (even though I did it in my head ;) ) Well... It's still better than how I had Birgit's name in my head :)

German news magazine Der Spiegel has an article about your favourite band in Friday's online edition: http://www.spiegel.de/kultur/musik/the-monochrome-set-unveroeffentlichte-songs-a-1087181.html
Or possibly I'm mistaken in guessing your favourites?
Anyway, the article is obviously in German, but hopefully you will be able to cope with that (if it is of interest to you)

Thanks so much for the heads up! I see it has also been put up on the Facebook page of the band, so I just did a translation of the article and posted it under the link.