You know how you always remember where you were when Elvis died, or the men landed on the moon - or when Prince died - (for any significantly younger readers)? Well, by the same token, I remember where I was when I first learnt about onomatopoeia, that satisfying figure of speech where the very sound of a word connotes its meaning, as in 'gurgle', 'hiss', 'choo choo' and 'tinkle'.

I first came across onomatopoeia in an English lesson at school. One of our set texts was a poem by Alfred Lord Tennyson called 'Come Down, O Maid', which closes on the immortal lines:

Why, the whole couplet is a phoneticist's delight!...the soporific effect of all those syllable-heavy words with constantly repeated 'm & n's (not to be confused with the confectionery of the same name). Yes, the lines perfectly capture the lazy, languid haze of a warm summer's day, such as today (bizarrely!).

The preceding line is pretty good too with its 'myriads of rivulets', and I am also rather partial to 'spirted purple of the vats' a bit higher up; those are admittedly more about assonance than onomatopoeia, though I could see a case being made for the 'spirted' part of the latter. A case being made, and then happily being drunk!


So what, you may ask, has any of this lit crit of Tennyson's poetry got to do with the Armani perfume of the title? Well, quite simply that that last line perfectly sums up how Myrrhe Impériale plays on my skin. For myrrh scents can be quite cold and sharp - I am thinking of Serge Lutens La Myrrhe in particular, which, though widely regarded as the Musc Koublai Kahn of the incense world, showers you with stabby little daggers of aldehyde that I find problematic to say the least. And even in the absence of aldehydes as such, the crystalline texture of myrrh can  make it seem icy and forbidding. And dank like church flagstones that never see the light of day.

So here is the rather laconic note list for Myrrhe Impériale:

I love many perfumes with saffron in them, though I am damned if I could tell you how saffron smells in them. I have even cooked with those little frondy things - which may have been red, come to think of it - most memorably in my abortive attempt at making French toast. I can't remember what they smelt of either, though they turned the milk pink.


So what I do smell, is myrrh blended with warm, vanillic amber - not too sweet and not too oddball as in the cola-forward concoction that is AG Myrrhe Ardente - Myrrhe Imp, as it pleases me to call the Armani for short, is myrrh shot through with the faintest hint of burnt vanilla - the register of Mona di Orio Vanille is perhaps the closest analogy. At other times it seems like a subliminal dusting of icing sugar - the sweet note is a bit of a shapeshifter at best. And at no point does Myrrhe Impériale stab or prickle, but rather brushes your skin with the gossamer touch of bees' wings.

Now I have read a few less favourable reviews of Myrrhe Impériale, typically to do with its lack of development - and in fairness it is a very linear and monotonal scent. But hey, that is what makes it so zen-like for one thing, plus that is what bees do - you won't find them performing the insect equivalent of Mariah Carey-style vocal gymnastics as they go about their business. They just murmur on and on - I shan't say droning, because apart from its negative overtones, drones are all male while worker bees are all female, a fact I only recently learnt on Country File.


I first mentioned my liking for this scent in a post from my travels last summer, in which I said I would be looking out for a split on the Facebook Fragrance/Sale/Swap/Split UK site. Well, I have patiently bided my time, and a 10ml decant popped up the other day. Well, it was technically part of a bundle, but the owner had already unbundled it to let Tom Ford Plum Japonais go separately, so I was in luck when Myrrhe Impériale was similarly set free.

While I have been trying to wrestle the hay fever hydra into submission over the past week or so I have scarcely been wearing perfume, and on the rare days when I have, it has tended to sting my neck and has generally failed to settle down on my skin. Then yesterday my split of Myrrhe Impériale arrived just as I was setting off to see the out of hours doctor about some heavier duty meds than the over the counter kind that were failing to keep my symptoms in check. It was shaping up to be a hot day with a very high pollen count and I hesitated to test Myrrhe Imp again. Firstly, it didn't seem like the weather for it; secondly, it seemed like contributory negligence to knowingly aggravate my hay fever in this way, even as I was off to the doc's to see about a cure!; and thirdly, if my symptoms did flare up I would have gone and imprinted a negative memory on the scent, potentially blighting my future enjoyment of it. 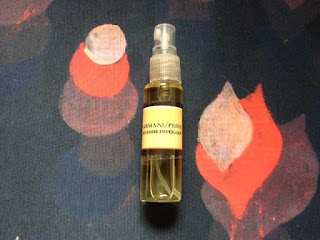 In other words, wearing my much awaited lemming could have gone horribly wrong on several levels. But the lemming prevailed, the perfume bloomed on my skin in the ambient warmth, and the little wisps that reached my nose in the doctor's waiting room were calming and meditative. Myrrhe Impériale is both a true oriental and the perfect summer incense.


Oh did I say? Since the better weather, Truffle has been out all day long, mostly chasing...yes, you've guessed it, bees. She has had one or two in her paw before now, but they have eventually broken free. I tried to explain to her about the value of bees to our ecosystem, and how they might actually sting her for that matter, but it falls on deaf ears. I am only glad that the bee population in my garden - far from being innumerable - can be counted on the fingers of one hand, or else Truffle would have even more of a field day, and most likely a very sore nose.

One of my favourites, a great review too.

Thank you, Angela! It is certainly a favourite incense of mine now.

You were rather poetic yourself here, V what with the cold flagstones and the gossamer touch of bees' wings. Fab post and a gorgeous sounding scent. I agree most myrrhe perfumes are not an easy wear which is made harder for me by an often present anise facet.

Lovely to get an update on the Adventures of Truffle too.

So well written that you have now sent me on a search for a tester somewhere. Love your cat!

Why, thank you, LBDDiaries, and I hope you catch up with Myrrhe Imp. I am crazy about my cat, as you have probably noticed.;)

Aww, that is kind of you to say so. I can bring it along when we meet and see if you care for it. I don't get any anise in this, I must say, and probably wouldn't like it if I did.

I am hardly seeing Truffle for dust at the moment during this warm spell, though she seems quite clear on where she lives, at least.

Awww, you added another picture of Truffle. When I was first scrolling through this post, I saw the top of the first picture and thought, "why is Truffle in jail?" Then I saw she was just channeling Muhammad Ali.
As for myrrh, I don't have any myrrh scents, not even any with myrrh as a background note. I will have to do some sniffing. And I will not make the mistake again of assuming a particular candle will continue to be available. I sniffed a Bitter Orange & Myrrh sold by our national bookseller chain, but didn't grab it. I don't really like open flames, but this one seemed to fill a reasonable area without burning.

What a great post - starting from the perfect title! I enjoyed it a lot though I did a double take at those two lines trying to figure out what exactly was "immoral" about them (clearly "bees do it" was on my mind). And I chuckled at "Myrrhe Imp" - thank you.

I liked this perfume when I tried it: not enough to actively seek it out but I could easily wear it had I happened to own it.

Truffle looks like an Amazon warrior. Rusty's recent escapade to the front yard was cut short by me when I noticed hit interest towards a stray bee and trust me, I wasn't concerned about the bee's well-bee-ing ;)

I did indeed, because she did her cavorting with bee trick after I initially published my post. ;)

Haha, she was indeed just posturing on the trellis, Ali-style. Orange and myrrh is a nice combo, also exemplified, if my memory serves me, in Baume du Doge by Duchaufour. There is a myrrh note in a surprising number of well known scents, so you might surprise yourself yet. Even Bronze Goddess, hehe.

LOL at 'immoral'. Funny that Tennyson didn't try to shoehorn one of those in, come to think of it. Or 'commemorative', or 'mummers'.

I would say Myrrhe Impis a pretty straightforward scent, so it might leave some people wanting. I feel the same about Eau Duelle these days, and though I have a bottle of the latter, I think I like this one more! Not FBW, though, but decantworthy for sure.

I also laughed at the bee's 'well-bee-ing'. You can write Bonkers titles any time! I wonder if bees can sting cats as they do us. I guess we must assume so.

I am very happy that you explained to Truffle the need for bees in our ecosystem, I'm sure if you repeat it enough it will sink in eventually.
I did love Myrrh imperial, as I love saffron, but oddly it didn't last long on me as far as I recall... And hey evil scent twin, you are coming more in and more into my territory ;-) I seem to remember I also smelled liquorice?
Onomatopoeia are wonderful, one of my favourites being 'purring'.

It can only be a question of time before she gets the message. We did have an incident with a dying baby bird on the drive this morning, but she was inside at the time - I think. Eventually some combination of other, bigger birds, and a local black cat that periodically scares Truffle through the window seem to have disposed of it, as I was thinking I might have to put it out of its misery.

Myrrhe Imp lasts for ever on me, how interesting. Did not get any liquorice, honest - I wouldn't have liked that I don't think though I am quite partial to Douce Amere. Am all over the map, basically. ;0

Beautifully written, Van. I do enjoy a perfume review with a literary bent! This stuff sounds good, from your evocation.

Hey, thanks! It's not my usual bent - or wont - but Tennyson just popped up from somewhere and I ran with him. ;)

I like your blog! Great post, I just recently tried a similar product that I received for free from perfumora.com. Will buy this one next time!