The Scent Crimes Series: No 15 - The infuriating shape sorting puzzle that is Cuir de Lancôme packaging 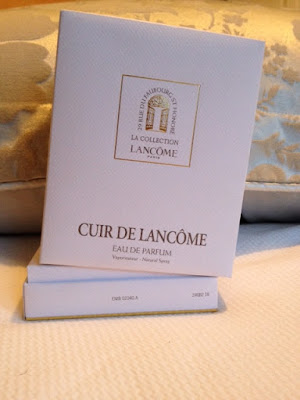 It's been a while since the last instalment of The Scent Crimes Series. Looking back through my archives, I had a massive flurry in the early years of Bonkers, before the posts became much more sporadic. For no good reason though, as I am still as irritated by things in the fumisphere as much as ever I was, if not more so, haha. This and the next post in the series were directly inspired by my recent perfume bottle sale, as part of which I decided to save underbed storage space by reuniting bottles with their boxes (where I had them) - both the ones I was selling and those that stayed behind.

One of these was the very wonderful Cuir de Lancôme - the only scent of which I have a back up bottle. Um...except Lidl Suddenly Madame Glamour, that is, which I am sure must be a mistake. One bottle is quite enough to meet my Coco Mademoiselle Doppelgänger needs. Anyone want the other one? BNIB for £4 plus postage!

Yes, Cuir de Lancôme is an unctuously sumptuous leather scent, one I find sufficiently bewitching to warrant my being bothered to give it its circumflex, so go figure. But I only rate the perfume, mind, and categorically not the box. The bottle top is also a bone of contention, and I have had a moan before about its woeful wobbliness, and inability to screw tightly, or snap shut, or remotely achieve hermetic closure in any way whatsoever.

But it is the box itself for which I reserve my greatest opprobrium - or the maddening shape sorting puzzle apology for one. For anybody not familiar with the Cuir de Lancôme packaging, it comes in two parts - three if you include the cute yet ultimately annoying concertina product leaflet, that is shaped like the bottle and vaguely reminiscent to readers of a certain age of paper dollies.

The box itself consists of a plinth and a cover, which has a cut out recess in the inside to accommodate 'Mr Weeble Top', as he shall henceforth be known, while the plinth has two cut out recesses - one to accommodate the base of the bottle and one to house the foldy-out leaflet. Once opened to its full extent, the leaflet seems to gain a mm or two in the process, and proves a tad tricky to slot back into the slit. 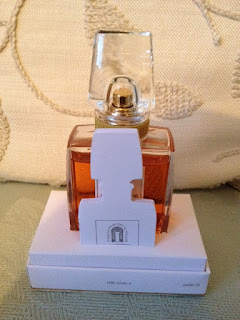 However, this fiddly procedure pales into insignificance compared with the Herculean task of inserting the bottle in the plinth recess, while simultaneously ensuring that Mr Weeble Top goes into the one in the 'roof' of the box. It is not unlike those fights we have all had inserting toilet rolls into toilet roll holders with a spring mechanism. Or batteries into devices, if you are one of those people who are career dodgers of toilet roll changeovers. No sooner do you get one end in when the other one promptly pops out.

Not only this, but the recess in the top of the box is nearer to one side than the other, ditto the one in the plinth for the bottle base. So you have to take care to put the box on facing the right way round, which isn't necessarily immediately obvious to anyone like me with less than optimal spatial awareness. 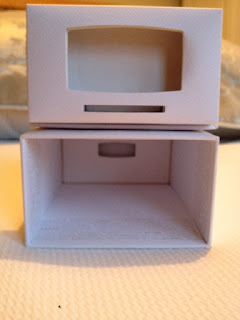 And I bet that if we all totted up the collective minutes we have spent trying to return our Cuir de Lancôme bottles to their boxes, we'd have enough time to exfoliate or make our own pesto or read the Sunday supplements. Or take up artisanal pencil sharpening (cue the most entertaining and informative nine minutes I've spent in a long time)...or stuff a mushroom, even.

Yes, Cuir de Lancôme may be one of the finest leather scents out there, but the packaging designers most certainly deserve 'a taste of the cat'. And I don't mean Truffle!

What are your pet packaging peeves? Do share in the comments! 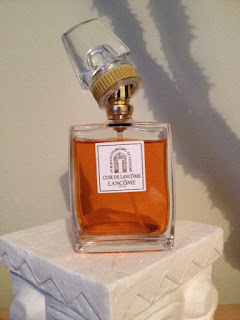 I love this as I am on this very day I am wrestling with it's sister "Magie" !

I have the very same problems with mine and that makes me wonder if it's a genuine one, or a fake. I cannot believe Lancome would have made it so...

Oh, how funny, Angie - you could probably use a bit of magic to make the darn thing go back in its box!

I have had this problem on both bottles I bought - admittedly from T K Maxx and Amazon respectively - but over the years I have heard of quite a number of other people who have experienced this issue with the Lancome boxes, so I can't help wondering whether - in packaging terms on this range at least - the company just came up with a lemon!

I have two bottles from the same collection - Mille et Une Roses and Climat. While I noticed that the boxes were not the most... fitting, since the there's no problem with the top (it's fine on the first bottle, and Climat comes with a dabber, that obviously isn't falling out), it's a little easier to do the whole put-a-bottle-in-the-hole process.

My own "pet packaging peeves" are cheaply looking bottles and/or labels for expensive niche perfumes. I won't name names but there are some brands that I wouldn't even test because I do not trust them: bottle/label isn't everything, but if they don't pay attention to what I can see, how can I be sure they are more attentive to the other parts that are not noticeable immediately? Do they use fresh ingredients or store and mix them properly if they cannot bother with finding a proper bottle for their creations?

That pencil sharpening video is brilliant. CBC Radio has interviewed David Rees a few times, most recently when he announced he was closing his business:
http://www.cbc.ca/radio/asithappens/as-it-happens-friday-edition-1.3527125/artisanal-pencil-sharpener-calls-it-quits-1.3527129
It's worth a read.

As for boxes, that plinth packaging is where I have come close to accidents by forgetting the package style and picking up the box near its top. No crashes yet, bit it's just a matter of time.

I am glad you have snug tops on your Lancome bottles that make the whole insertion in the hole business that bit easier!

You make a good point about the importance of the packaging being of commensurate quality with the juice. You will remember my own disappointment in Eau de Earth, which really does smell remarkably like Apres L'Ondee, yet which comes in a box resembling a packet of fags (ie cigs) or worse!

I didn't realise that David Rees is a bit of a celebrity pencil sharpener across the pond! I will check out that link, thank you.

And I quite forgot to mention the problems that occur when one foolishly attempts to lift the box of Cuir de Lancome by its top alone, a mistake I have made many a time. ;)

PS That was great fun. Shame Kanye didn't come through and hit him up for pencils after all. ;)

Yeah, that Kanye, always with his own agenda.
;-)

So I might have a genuine one, after all 😀
I need positive news on a Monday !

You know V, I don't have the box to my bottle of Cuir de Lancome so this was all news to me, except for Mr Weeble Top who I am well acquainted with.

It must have been in the early days when I didn't think to hold on to the boxes. I guess I will have this pleasure to look forward to when I eventually open my own back-up bottle.

I'm glad you love it enough to hang on to it and its reserve. It's still a beauty.

Ooh, are you back from Barca?

You may well have this pleasure to look forward to when you broach your back up bottle! At least you will have been warned about not just grabbing the top part, though that is so easy to do...

Well, what a funny coincidence! Pedestal boxes, you have taught me the name for this style - I have only encountered them in the Lancome range so far, but I feel sorry for any owners of multiple brands with this defect. The cumulative frustration must be very annoying, as you say! xx