'Use it or lose it!': Travalos succumb to sub-post office syndrome

I am just back from a nine day trip to Germany, the run up to which was so very hectic that I uncharacteristically didn't have time even to do one of my quick 'Bonkers is off on tour again'-type posts before I left. Nor did I finish my work project in time, so I ended up spending the first couple of days of our journey across three countries typing up my remaining interviews on a clatter of trains (I use the word advisedly), that were more or less prone to sudden unexpected lurching manoeuvres.

I originally intended to publish this post before I went away, as it was prompted by the perfume selection process for my trip. In my state of general disarray, however, I didn't get beyond writing the first two sentences. But 'I have started, so I'll finish', to quote Magnus Magnusson on Mastermind. There will additionally be specific tour-related posts to follow. And one on the bathroom(!), which was a step nearer completion today. Just a step, mind. And one or two on perfume, before I get too off-topic to warrant the moniker of perfume blogger.

Can it really be nearly two years since my last post about Travalos? I do seem to have the urge to write about these handy travel receptacles from time to time - completely unprompted by any commercially driven poke from the manufacturers, I hasten to add - and today (for which read 'about a fortnight ago') is another such occasion. 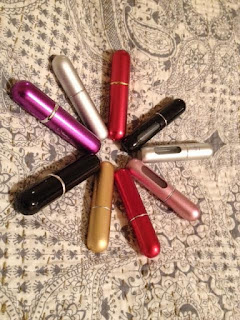 I decided to wear Diptyque Volutes edt at the weekend (whichever that one was - w/e of 26th November at a guess), and reached for the Travalo rather than the full bottle, only to find it was almost empty. I did a slight double take at this, as I didn't remember using it very much, not even 4ml's worth. I got the bottle out and duly refilled it, before something prompted me to examine the fill levels of my other half dozen or so Travalos.

To my surprise they were all empty, with one or two exceptions. As with the Volutes, I couldn't remember draining them dry, or even wearing them at all lately, ergo the only explanation had to be that dreaded sword of Damocles which strikes terror in every decanting perfumista's heart, namely evaporation...the same mysterious chemical process by which ex-Mr Bonkers' beer glasses famously used to empty.

And when you stop to think about it, the Travalo is after all a container with a permanently exposed hole in the bottom, the very hole which enables you to just sit it on the atomiser of your perfume bottle and pump up the perfume without the added faff of having to remove any cover or top. Or bottom, to be anatomically correct about it.

If I may myself briefly lurch from Damocles to Danaus, the Travalo principle neatly illustrates the Greek myth of Danaus's fifty daughters, who were earmarked to marry the fifty sons of Danaus's twin brother Aegyptus - against their father's wishes - and I can't speak for their own. Hold on, would that not be a mass nuptial of first cousins? - but moving on...this is ancient history, after all. So anyway, at their father's behest, 49 of the women killed their husbands on their wedding night, and were condemned "to spend eternity carrying water in a sieve or perforated device. In the classical tradition, they come to represent the futility of a repetitive task that can never be completed." Much like the Myth of Sisyphus indeed, but involving a leaky bucket rather than a rolling stone.

So if anyone is not already familiar with the phenomenon of the evaporating Travalo, I hope this post will serve as a timely reminder. 'Use it or lose it' as they say of sub-post offices, muscles, foreign language skills, inkjet cartridges, and sundry other other items that need to be in regular service not to wither on the vine. But I will stop right there at the mention of vines, for that way lies yet another Greek myth - of Tantalus and his tantalising bunches of grapes - which perhaps have a tenuous relevance to the topic in hand in the sense that you reach for a Travalo, and another and another, only to be serially disappointed. 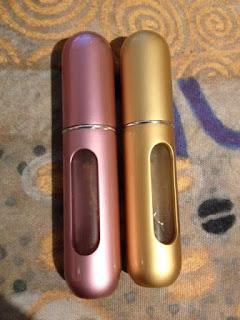 Oh, if anyone could use a Travalo (in gold) that had Chanel 1932 in it, or one (in pink) that once housed L'Agent Provocateur L'Agent, drop me a line, and it is yours. You know I don't believe in washing the blessed things.

As ever, bonkers is both entertaining and educational. I had forgotten about Danaus's daughters and will check my travalos in the morning. I think mine contain Heeley's Esprit du Tigre and Histoires de Parfum's 18something.

Is there an easy way to clean old travelos? That 2012 favourite is long since just a sticky residue I don't want affecting the 2017 occupant.

Lovely to have you take time out to check in with us, V and what a cautionary tale. I never took the Travalo plunge but maybe I would have if I travelled as much as you.
Look forward to the travelogues!

So sad to find your fragrance has flown the coop - I'll have to check whether I have any in such peril. (Mind you, go with the Flo is what I've done most recently!)

Haha, thank you! I remembered there being a myth about a leaky water receptacle, but had completely forgotten the actual story behind it. Good luck with your own Travalo checks. I will certainly keep on top of mine more in future - as in use them in a timely manner!

I really don't reckon there is, sadly. I don't even believe you can truly clean a normal atomiser that you unscrew, but with Travalos there is no way of getting inside the thing.

I am so behind with everything since returning from my trip that I am surprised I managed even this shortish blog! I have lots more in mind that I would like to write about - including those travelogues as you say - but it may take a while to clear the decks. I didn't know you had never taken the Travalo plunge. Maybe I used mine more frequently in the heyday of my hobby, for I have only recently noticed the evaporation issue...

Nice to hear from you and LOL at 'flown the coop'.

I believe Undina is a bit of a Flo fan though they have yet to cross my path.

A good reminder, thank you. I've found it seems to vary--I've got one that seems to eat scent to the "but I'm sure I'm refilled that yesterday" degree, while another I mislaid for a year seems absolutely fine. I will keep my beady eye on the levels.

I wonder if a little bung of blue tack or something would help, while they are sitting about in a box.

Now to the topic (I feel tempted to do a follow-up post on my atomizer tests :) ).

First of all, you're kind of wrong: the opening in the Travalo bottom can be classified as a hole probably with a slightly better merit than that on the top of the thing: it has a similar valve mechanism that allows the liquid to get inside only when pressed by the nozzle pipe (or whatever it's called) of the perfume bottle. It's a similar approach as was used 20-30 years ago to re-fuel gas lighters.
Having said that, I have to admit that Travalos loose perfumes more readily than, let's say, simpler constructions - such as decant bottles (more or less fancy, but with the same one screw-on sprayer on the top).

The only Travalo that I have and just checked seems to part with most of the content in it though I can't remember the exact level in it to start with since I did use that perfume (it's Johana so I can fill in a little more and see how it goes).

While I wasn't really a fan of the Flo atomizer, I reviewed the one that I had. I checked it just now - and I have to admit that it holds the content well. Though with its price tag I would still go for a plain decant bottle.
Hm... I should definitely do a follow-up post... Thank you for the idea! :)

Funny how your Travalos behave differently - that has always puzzled me too about regular atomisers - some are definitely more prone to evaporation.

Blue Tack on their bottoms is a nifty idea!

I have missed you all too!, but my schedule while away was too full on to keep up with blogging - or emails and social media generally.

Thanks for putting me straight on the exact mechanism involved. A valve should be more watertight I agree, but the fact that it does open some of the time may predispose it a bit more to leaking than a completely apertureless receptacle, like decant bottles of the conventional kind.

I must have misremembered your views on the Flo - I do recall your reviewing them, certainly. Maybe I am mixing you up with another blogger who likes them. Glad to have got you thinking about another post on similar lines!

@crikey - or maybe a bit of duct tape. I am a member of the Duct Tape Fixes Everything Club...AnnieA

Haha, it didn't stop Truffle busting out of her cat flap while I was away recently, but may well do the job here!