I have just had a quick look at past entries in The Scent Crimes Series, and of the previous 17, a surprising seven tackle assorted irritating aspects of perfume packaging. I was saying to Val the Cookie Queen only the other day that I seem to be becoming more and more easily annoyed these days, and that it doesn't take much for something on Facebook to set me off: from the eerily well targeted ads for brow lifts, wide fitting shoes and funeral plans, to the generalised ranting, humble bragging, cryptic cliffhangers, inexplicably inflammatory terms of endearment (especially 'my lovely' and 'hun'), not forgetting the self-help memes - and even (when I am feeling particularly curmudgeonly) the surfeit of cute animal videos. Though sometimes it is a video of a squirrel nibbling on an acorn before falling over in ecstasy, or an otter doing backstroke with its baby on its tummy that is precisely the tonic I need for these unfortunate bouts of misanthropy.

But yes, it would seem that perfume packaging also has boundless ways to wind me up. For those who have come latterly to Bonkers, here are a few of the past titles to give you an idea:

And possibly my top peeve!: 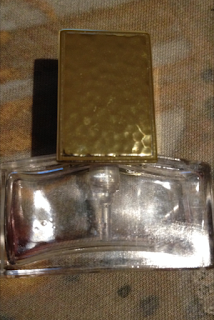 And then the other day I was thwarted by perfume packaging in yet another way - namely by a miniature bottle of Estee Lauder Amber Ylang Ylang, to be exact - when it failed to yield up its remaining drops on account of the convex surface of the inner bottom of the bottle. In vain did I tip the mini this way and that; the precious few drops of scent simply slid out of reach to one or other corner, beyond the pumping range of the admittedly very short tube.

Now it is because I so rarely finish anything bigger than a sample or small decant - most of my full bottles will probably have gone off before I do so, with a handful of notable exceptions - that I was caught on the hop by this. But it was all the more frustrating as I was in the mood to wear Amber Ylang Ylang at the time, and there was no other way apart from activating the nozzle to get the juice out. In fairness I do also have the same issue currently with a bottle of Clarins Foundation, to which I am quite tempted to take a hammer in my piqued state. Such drastic action would only hasten the run off of the last drops of Amber Ylang Ylang, mind, so I am well and truly snookered on this one. All that is left is to take a moment to enjoy the beaten gold top, whose stippled allure partly drew me to this scent in the first place...

Hmm, on closer inspection, I see I have a concave bottom problem going on with the Clarins... 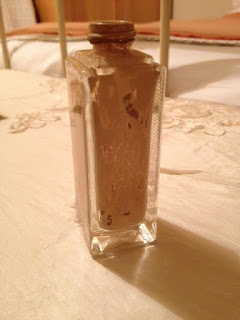 Have you found yourself thwarted by this troubling phenomenon of tantalising convex bottoms?

It is of course also a problem if you are estimating fill levels prior to hosting a split or selling on a partial bottle of perfume - how do you account for the missing juice where the glass bows out? All oddly shaped bottles are tricky in this regard, come to think of it - well anything that isn't rectangular or squarish and with an even thickness of glass throughout.

Argh! I just learnt that this Amber Ylang Ylang has been discontinued - cue more annoyance! That is a great shame, as it was a fine example of a sweetly comforting gourmand scent with its tenacious base of amber, sandalwood, and vanilla.  Here is a link to Angela's review on Now Smell This. She does admittedly call it the ultimate 'cashmere sweater scent', but I will overlook that ;), as it was back in 2008, and Angela may well have been one of the first people to use - if not indeed coin! - the phrase that has gone on to become the doyenne of perfume cliches (well, if you are a crabby old stick like me, that is).

And if you aren't bothered by tantalising convex bottoms particularly, do you by any chance find yourself more readily irritated these days? I blame middle-age hormones - what's your excuse if so?

Oh yes! I am such an old witch these days. I agree about the hormones, but the state of the world doesn't do much for making me jolly either and I find myself yelling at the TV in great intolerance of any presenter I judge incompetent, or silly pronouncements by MPs or latest health news that contradicts all that went before.

I only discovered that I actually like Amber Ylang just before Christmas and bought a decant (thankfully not the EL miniature!) and then discovered it's been discontinued (cue more rage). Apparently that and the Jasmine & White Moss are no more, although the Tuberose & Gardenia has had a reprieve. Honestly, they've only been going for a few years, grrrrr, grrrr.

Good to meet a fellow curmudgeon and lover of the sadly discontinued AYY. I like all three from that range but AYY was my favourite.

I should qualify my post really and say I am sure I also have 'ranting form' on FB, but some of the posts these days are so strident and sweary they are quite disturbing.

I have been puzzling over why I should have taken 'agin' an expression like 'my lovely', though nothing against anyone who may deploy it. I think it reminds me of something a West Country serial killer might say to lure unsuspecting young women into his caravan - or cellar - of doom. I may have an odd imagination, granted.

Cute kittens are the answer to most of the world's ills, though I am trying not to overdo the Truffle pics on FB these days. She has to do something different to be featured - or that is the intention at least!

I just unfollow the posts of those on FB who get on my nerves, although you can only do that with people you're not really in contact with.
I think it's how often people post those quotes and animal videos etc. Once in a while is okay but most days is a bit much. I have a pal who is always sharing novel workouts and healthy recipes. You just glaze over when their posts come up after a while.
Anyway, topic of the day. The photo illustrates perfectly how infuriating the convex bottom must be! Surely that ranks as a design fault if you can't use all the contents!
I definitely think our tolerance for idiocy reduces with age, which is probably no bad thing.

You've made this curmudgeon smile. Spookily I had also been thinking about West Country serial killers and their use of "my lovely", only in my warped imagination it's a cuddly old lady making a nice cup of tea for the unsuspecting lost rambler .........

I think that the genie of unguarded (no, I should say nasty) comments and ranting has been well and truly let of the social media bottle and there's no putting him or her back again.

Haha, Jillie, between us we do have vivid imaginations - and good to see they are equal opportunity too!

I have done a fair bit of unfollowing but often I think: 'Perhaps it is just a phase they are going through' and it takes a lot for me to unfollow someone I know.

I would certainly glaze over at a constant supply of novel workouts and healthy recipes. But I speak as a Poppet- and Bombay Mix-popping sloth a lot of the time.

I think it is a design fault in the bottle! And the pump mechanisms - also in foundation - are useless when it comes to the dregs. Tomato ketchup is a similar script. We need long fine spoons at the very least for any receptacles with removable tops / pump gubbins.

That squirrel video was absolutely priceless! :)

I visit FB so rarely that I do not get annoyed much by anything I see there. But, in general, I noticed more negativity in my perception of the World, and I do not like it and thinking of how to change my attitude (since I cannot change the World :) ).

Though I've never gone through such experience with any of my bottles, it would irk me if I couldn't get the last drops of perfume since I always try to use up everything: you should see my hand cream tubes! :)

There is a lot to be said for visiting FB rarely. I wish I could take a leaf out of your book. Maybe backing off would help with my own negative reaction to the stuff flying back and forth on there?

I would like to see your hand cream tubes! I bet you have an excellent MO for maxing them out. ;)