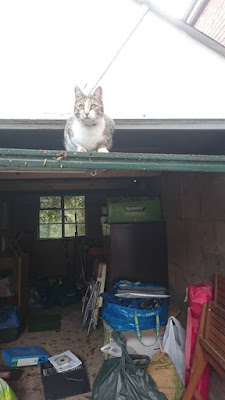 I have been caught in the grip of decluttering fever this past week - not just any strain of decluttering fever either, but a very rare one that has prompted me to make a start on...ominous drum roll...the garage. For over the past five years the Augean stable that passes for my garage has been gradually silting up with detritus and 'I'll think about what I'll do with that later' items on a shamefully grand scale. Sagging, semi-soggy cardboard boxes are piled to the rafters, from which impudent lianas of clematis that had somehow inveigled their way through the (none too salubrious asbestos cement!) roof hang down in a feathery curtain. The window panes are covered in cobwebs, as are the grooves of the up-and-over door. To be fair, there are cobwebs clinging to pretty much every surface, plus a lot of leaves that either snuck in with the clematis or blew in when I occasionally opened the door in the winter months. Oh, and I don't even want to think about the dead spiders I have found, one of them drowned in a little puddle of oil at the bottom of a jug. The idea of actually keeping a car in there seems as preposterously outlandish as keeping firewood in the fridge. Though as there happens to be both a fridge and several bags of logs and kindling in the garage, that is one fanciful idea I could easily turn into a reality. ;)
The reason for mentioning the Great Garage Clear Out - which is ongoing, I should add, for when I have finally given it a good clean inside, the garage diaspora currently cluttering up my front room has to be gone through and eventually put back there...or put somewhere - is because as well as a ton of work related paraphernalia (see below) I also came across some rather nostalgic reference material on perfume in my rummaging. I remember painstakingly compiling it all in the immediate aftermath of my being struck down by sudden onset perfume mania. I managed to fill THREE Lever-Arch files with handwritten notes or print outs from the Internet, which I have now weeded back to one, and will probably whittle further. I also found the notebooks in which I used to write down mini-reviews of every scent I tested, to the subject of which I shall also return.

But that will have to be it for now, as I am off in the morning to stay with my friend L in France again for a few days, and although I have been doing pre-trip errands and chores all day long, somehow or other I still seem to have it 'all to do'!

Wow your tidying festival is progressing a pace, V. Perhaps more like tidying fever. I have to say I thoroughly enjoyed my major turn out last year and quite enjoying doing it now at work. It's kind of therapeutic if tiring. Your break in France couldn't come at a better time!

I just had one A4 notebook for perfume in those early days but it was a lot of fun. Happy times.

Oh wow, worse than my storage rooms in the basement! Good thing there were also items of interest among the things you had put into storage in the garage.

I myself have a lot of old clothing and printed matter of all kinds to go through and I wish it was a quicker process. I lost a lot of my early notes about perfume, due to a laptop which blacked out without warning, so now I try to copy files on a regular basis. Sometimes notebooks are in fact easier to keep.

I would leg it to France too. As fast as possible. CQ

While my garage does not require decluttering yet (the policy in the complex where I live does not allow parking outside - so we have to keep our garages empty enough to park in them) but I noticed that it can use a good clean-up, maybe even a power wash.

I wonder: why did you keep those cassettes? I understand when people have old music or other personal recordings hoping one day to digitize them (until those just disintegrate relieving their owners of that hanging task) but why would you need those work-related cassettes? Is there any even theoretical secondary use for them? Are you planning on writing a book about those times? ;)

Still smiling at 'tidying festival', and how far removed from the gritty reality of the garage clear out that term seems. 'Fever' is getting closer, yes. Glad you are finding the work equivalent rewarding - and you probably similarly need the break.

Interesting that you had an A4 notebook in the early days - I wonder how many of us documented our hobbies in that way?

Ooh, so many items of interest - it will take me days and days to examine them all, especially the many boxes of photos. You are right that the sifting and sorting of one's belongings takes a long time.

Shame about the loss of your early notes - but I note that you were also keeping track of your hobby in that way - perhaps hard copy is a good idea.

That's interesting about your 'no cars outside' policy - many people in England - also living in similar complexes, I suspect - keep their junk in the garage, rendering it useless as a parking facility.

I have no idea why I am keeping those cassettes, to be perfectly honest. For a time I thought it might be helpful to hang onto them in case I ever had to refer back to a specific project, or even a specific interview. The business cards on the inside of the back cover are quite interesting in themselves, and would be useful if I ever had to do a project in that field, even as something conversational to oil the wheels - 'Oh, I interviewed your predecessor in 1999', type of thing. But the chances of actually needing to go back to any of those jobs at this point in my vanishing career is remote at best.

The only other possible use might be as evidence of my ability to speak foreign languages, but in theory if I can do that I should be able to just speak and not refer a person to my voice on a cassette, haha.

So no, I really don't have a good reason. Certainly not to digitise them, that's for sure.