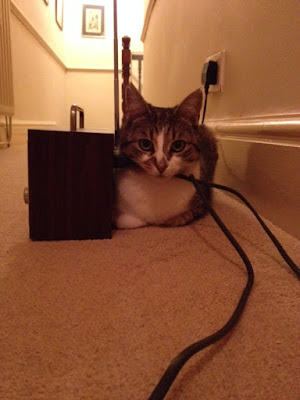 Been there, done that, will be there again.

Good luck with both of your projects and come back when you can: we'll be somewhere around - unless see above ;)

Thanks, Undina! I know extreme busyness is your normal state, and I am impressed you manage to post as often as you do at such times. The last deadline on my jobs is 20th December, so the end is in sight at least, if a way off yet. ;)

Wishing you lots of success! Hope these jobs will lead to more in the future. Looking forward to your posts when you finally get a chance to relax - and to make it up to the adorable Truffle, who looks like she is saying "Pay attention to me or the flex gets it".

Thanks for your good wishes! Both jobs are from people I have worked for in the past, but my connection with one agency is more historic than the other, so it is good to be back on their radar.

I thought Truffle might even have been contemplating self-harm, haha. Would rather think it is just the radio that might get it in the neck. Though ideally neither. ;)

Good luck with the projects! It certaimly looks like you could do with some help from friends locally to get hold of cookies and other stuff before Christmas.Decorting the house can always be done at the last moment.

Once this busy period is over, I am sure Truffle will quickly forget you didn't spend all day with her. After all, she can observe your work, which I understand she does

We are extremely busy too in our business, and I am going commando more often than not. I will definitely bear with you! Maybe Truffle is not peeved but actually trying to offer her assistance ;-)

Ah, it is good to know I am not the only one who is too busy to wear perfume. Hope your busy phase lasts as long as you wish it to!

And yes, maybe Truffle was trying to be helpful. She certainly has developed a fine line in concerned looks lately. ;)

Thanks, Ingeborg! And sorry for the slow reply. I went round to a friend's house (in the next street) for dinner last night, and she quite understood that I had to more or less go straight home again and work some more, which was kind of her. And yes, the tree can definitely wait till later in the month.

Truffle has been trying to observe my work as much as she can, but I have a 'shut door' policy when I am on the phone interviewing. She might disconnect the cable or something. ;)

Go live V. I'll miss you but be extra excited when you're back.
Portia xx

Aw, thanks, Portia! This mad work phase is continuing till mid-Jan in one shape or another, but I am hoping to do a post over the holidays - which I am also partly working. ;) xx