Le Labo Labdanum 18, and when perfumes go out with a whimper, not a bang 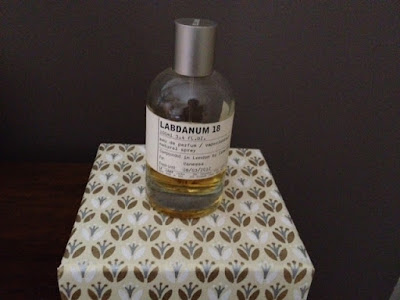 I am sorry my posts have been a bit sporadic of late, or more sporadic than usual, say(!), for which there is a litany of reasons I shan't trouble you with, or not now. So I thought I would squeeze a quick one in while the going is good, namely a musing on the varied ways in which that very real hazard faced by those of us in a SABLE situation (Stash Above and Beyond Life Expectancy © Hazel) ie perfumes gone rogue, can occur. If you had asked me what a turned perfume was like, I would have said: 'Oooh, it is hard to describe, but a nasty alcohol-y-crossed-with-dead-flower-water kind of vibe.' Always in the top notes, and when the scent has really gone, permeating the whole juice. Though even that image isn't right. I am not sure I have the descriptive powers to do justice to the rank smell of a scent that has properly gone off. Vintage ones seem to be the most offensive - you know, those fierce chypres of yore. Or an old fashioned animalic oriental. A turned one of either of those can be truly repellent.

But what I have discovered of late is that there is another kind of 'offness' - where the perfume has undergone a sufficiently marked metamorphosis to not be remotely classifiable as itself anymore, while not necessarily smelling disgusting. A mild example of this phenomenon was my bottle of Diptyque Eau Duelle that I sold through a Facebook group only to have the buyer promptly ask for their money back. This was because the fragrance - like small children who will only eat pudding - had completely lost its top notes and gone straight to the base, which I would characterise as an 'Om-like', vestigial vanilla hum. Can you tell I do yoga now? ;) Albeit not the kind with chanting. This latest incarnation of Eau Duelle isn't unpleasant, but there is no light and shade and no development, that's for sure. It is indistinct and vague, like the olfactory equivalent of a smudged watercolour, and reminds me of the 'comfy jogging bottoms' stage of Penhaligon's Tralala (© Tara). So my Eau Duelle no longer qualifies as itself, but to my mind it has a pretty strong kinship with how it should be, as in being its own drydown at least.

So there was that, and then I encountered the very strange beast that is Le Labo's Labdanum 18, some 7 years after my bottle was first compounded - just for me! - not long after this event, which I wrote up in my then guest blogging capacity for Cafleurebon. Eyeballing that label, I see that the Best Before date (which is what I take 'Fresh until' to mean), was only a year after I got it. A year? The very how very dare they idea! Do they imagine I will bathe in it, like asses' milk? I have no idea when exactly Labdanum 18 went all funny on me, but I swear it can only have been in the last couple of years, so in hindsight the 'Fresh until' warning was breathtakingly conservative.

And how does Labdanum 18 smell now? Hmm, well the opening is a thin, reedy and resinous vanilla spiked with anise, and as the scent wears on, it cycles through every nuance of liquorice in a box of Eponymous Allsorts. A note to which I am far from partial, so I was most taken aback by this unexpected mutation. The scent is not horrible by any means, and I have liberally anointed myself with it out of sheer astonishment quite a few times in the past week, but this version is a far cry from the rich, warm and enveloping barnyard vanilla of Labdanum 18 in its prime.

I would therefore have to concede that my Le Labo has well and truly turned, but NOT in our horrible alcohol-y way mentioned at the top of the post. This is almost a different perfume entirely, though I can detect the wan connection with balsamic vanilla. So in summary it has definitely gone, but gone out with a peculiar whimper, not a whiffy bang. Howver, it is so weak and so 'other' that I may have to subtract a few digits off it though, and recast it as Labdanum 6.25. They haven't got one of those in the line, I don't think.


Have you had any perfumes turn in ways that surprised you?
Posted by Vanessa at 17:06

Hi Vanessa,
My collection is a lot smaller nowadays so I rarely get to 'the turn'. However, my beloved Dior Escale aux Marquises has developed a whiff of dry cheap biscuits in the top notes. I'm waiting for the nail varnish and' as you say - spent flower water, to join the biscuits. It's like a crap convenience store inside that bottle!
Sorry about your Le Labo.

I remember that scent well! With its trademark 'quilted' bottle? Dry cheap biscuits is not the scent we expect from Dior, and LOL at your convenience store medley. Seems I underestimated the many and various - and curious! - ways our perfumes go to die. ;)

I'm sorry about your bottle. Now I'm curious if the decant of this perfume that I have (not from your bottle) is still OK: I haven't touched it in more than 3 years. But even before than I do not remember this perfume to be "rich, warm and enveloping barnyard vanilla" - maybe my decant was turned to start with? :)

In my experience I distinguish the "really off" and "I hope it's turning and not I suddenly stopped liking it" phases. I usually go through 2-3 attempts to revisit it hoping I was mistaken - after which throw away decants or decide if I like the bottle enough to use it on my dresser as decoration (I have a display of bottles with turned perfumes or those that I bought for these purposes) - otherwise it goes straight to my garbage bin.

Oh V, what a pain. Not one of the cheaper brands either. Sounds like the composition "fell apart" over time rather than went off. It is a reminder to use it or lose it but it's hard, even with a fairly modest collection. This hasn't happened to me yet but I'm certainly facing a SABLE situation.
I wonder if the Best Before date is more of an incentive to use it and buy more. Especially as it's mixed to order and not sitting on a shelf for ages.

I would be interested to see what you make of your Labdanum 18 decant in its current state.

I remember not being at all sure whether my Jo Malone Kohdo Day scent - Lotus Blossum & Water Lily - (which I know you have also owned) was turning, or whether it was my imagination, or as you say, whether I had just gone off it. As opposed to it in itself going off! I certainly did revisit that one loads of times as it seemed fine after the top notes. The top notes were intolerable though and spoilt the whole experience. I seem to recall your Kohdo bottle also went into the garbage bin in the end!

It simply isn't possible to use everything, sadly, as we all know. I was given that bottle, I should have mentioned - I wouldn't knowingly seek out 100ml of anything these days, and not even then.

Hmm, I don't think you can put Best Befores in a motivational way, but that it has to be some kind of technical standard, even if approximate. And maybe they weren't being cynical but that was their best guess in fact, based on the average person keeping perfume in their bathroom, hehe.

Ah okay. I thought it was like food where Use By is a definite instruction whereas Best Before is a lot more wishy-washy.
Very pleased to hear this was a gift at least.

Hmm, you have got me thinking now. Both are a version of a technical standard - also in food - but the Best Before one is inherently more wishy washy for sure. Still I don't think a company could play so fast and loose as to knock a number of years off the date to suit its own ends, hehe. Bet Pia or Liz etc could advise!

In spite of my LOVE of perfume for years and years, I am not very discerning! I'm not great at identifying notes, my nose-palate is just...so-so. It's entirely possible that I simply don't know better and that I've been enjoying fragrances that some would describe as off. I say this because I have a little treasure trove of vintage scents, and many of them smell similar to me!

I think that this is a rather fortunate place to be, enabling you to enjoy your scent collection indefinitely!