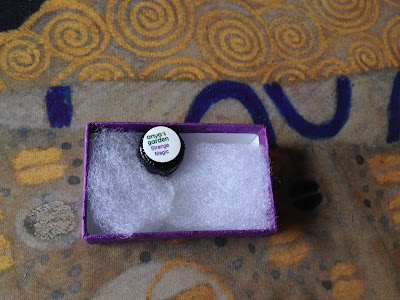 Earlier this month, during the very hottest weather of all the hot weather we have had lately, I drained my sample of Strange Invisible Perfumes L'Invisible, a juicy marvel which for no good reason had been languishing in one of my sample bags for years. I recall popping into the Strange Invisible Perfumes store in Venice, LA, on a work trip in 2010, but having checked the relevant blog post I note that I didn't get round to trying L'Invisible on that occasion, and have no idea how or why I acquired this sample.

Ooh, am I sorry to have finished the vial. L'Invisible is a really cheerful, tangy scent with a luscious citrus and ylang-ylang opening, seguing into a cosseting drydown of amber and vanilla, that is perfect as the temperature drops on a summer evening - I don't pick up much moss. Invisible it is not. So L'Invisible had 'strange' in the brand name and was orange in colour, a combination to which I was now very favourably disposed. Such that when natural perfumer Anya McCoy kindly offered to send me a sample of her latest creation, Strange Magic perfume, "made of 95% handmade tinctures of flowers from my Miami garden", I jumped at the chance. Anya went on to explain: "I believe it's the first perfume to be made mainly of tinctures, with just a few essential oils and absolutes added where necessary."


It wasn't so much the fact that this perfume is made of tinctures per se that got me excited, but rather its enticing name (no pun intended - Anya's last release was called Entice), and the fact that the blooms of flowers used in the making of Strange Magic had changed colour in the process. I was already in the mood for an orange perfume, while this one was reportedly dark red. I also read this blog post of Anya's with interest, which documents her decades-long tincturing experience generally, and how she noticed a few years back that the flowers of Michelia alba (white champaca) went radically different colours when in contact with the 190 proof alcohol she uses to make her tinctures, beginning with pink and ending up a deep burgundy, the more flowers she added.

Oh, I do love things like that which appear to be magic! I was given some Portuguese gin at Christmas which is a violent purple in colour like meths, and is meant to turn pink when you add tonic. That unfortunately proved to be mere advertising puffery, for the gin actually goes pale mauve instead, just as you would expect. Then there was the wonder in chemistry classes at school of copper sulphate solution, whose bright blue hue - a small miracle in itself! - would go mysteriously white when heated. I find such things endlessly fascinating, and couldn't wait to try this particular instance of 'strange magic' in perfumery. 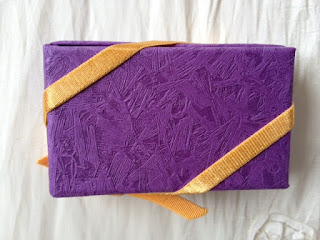 But before I come onto the fragrance itself, as I so often do on Bonkers I must pay tribute once again to the exquisite packaging in which the sample arrived. I love the bold combination of orange and purple - even if it reminds me vividly of Loyalist marches in my home town of Belfast. I have already bestowed the accolade of 'packaging highlight of 2015' on what I dubbed Anya's 'bias-beribboned box' in this New Year's round up post. That had contained her Ylang-Ylang tincture, which I remember enjoying wearing that summer, but as it was sadly stolen along with my luggage I never felt able to review it.

I took an even closer look at the box this time round and could see that it was recycled. Very commendable. There was the telltale haphazard fibre pattern you get with OSB (oriented strand board aka Sterling board), a material on which I have done multiple pan-European studies (which may come as no surprise to you). Here is the very same stuff being used to line the bar in a quirky cafe called Spout in Leek.

And finally, on to the sample of Strange Magic...which is indeed dark red as billed, veering to reddish brown. It stays brown on paper but goes on clear on skin. Maybe that's because I am a bit tanned at the moment, but no, I really think it is colourless on skin - that's another aspect of its magic, then. ;)

And as you can see from the extensive (but still deliberately not comprehensive for perfumer as magician reasons!) note list below (plucked from Cafleurebon), the fragrance comprises a whole host of tinctures of different flowers. 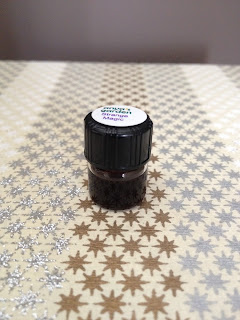 When I first smelt Strange Magic I was instantly reminded of my dabbling in natural perfumes at the start of my hobby - in a purely sampling sense, I mean. I was very taken with the range by Ajne of Carmel, to which I was introduced by Michelyn Camen of Cafleurebon, as it happens, and over time I acquired samples of Printemps, Desire, Bloom, Divine, Lakshmi, Om, Fleur Blanche, Vanille and Aphrodite, and even went on to own a small bottle of the frangipani and jasmine beauty that is Calypso, reviewed here. My Calypso is also orange now and very aged, but still not off I wouldn't say! The sheer intensity and Dolby Surround Smell effect of natural perfumes is hard to describe, but it is like sniffing something in HD, where the florals are incredibly present, whilst sometimes seeming to be showcased against a darker, murkier, slightly treacly base (in a good way!). If you put L'Invisible in a cave you might get a sense of what I mean, though there again probably not. I pick up on a heady bouquet in which I can detect ylang-ylang and a sensual blur of other sweet and narcotic flowers, but I would be lying if I said could make out anything else distinctly. But that truly doesn't matter: suffice to say that Strange Magic does indeed cast a spell over me, and as I say is extremely evocative of those equally heady early years of experimentation and discovery when I first fell down the rabbit hole.

The only downside to mention is that as with magic tricks, so with Strange Magic the perfume, it is rather a case of 'Now you sniff it, now you don't' ie Strange Magic doesn't last very long on me, and mutes down to a whispery trace within a few hours. I would like to say that its ephemeral nature is part of its mystique, but we are talking a scent that, due to its handcrafted and natural provenance, is necessarily a high end item - it costs $125 for 15ml. That said, I see my Calypso from Ajne is now $195 for 15ml, so by that yardstick Strange Magic is a relative bargain, longevity aside! And if you are someone who pays most attention to how a perfume smells in the first few hours anyway, that might not be an issue. Assuming you even had the same experience as me of its being somewhat fleeting. I note that Mark Behnke of Colognoisseur got 6-8 hours wear from Strange Magic, so maybe I am the one with 'strange' skin in that regard!

In closing I will just say that I wish the things in my garden smelt anywhere near as nice as the flowers in Anya's. Currently there is only scorched yellow grass and some tall white daisies that are keeling over and turning brown prior to giving up the ghost completely. Oh, and one unnaturally tall peach rose, so much so that I hadn't even noticed it was in bloom. But I doubt I have anything like the wherewithal to make a tincture...so will gladly leave that to professional perfumers in more tropical climes.

From your old post I guess you got that sample from one of the MUA’s “friends” :) BTW, speaking of MUA, the last couple of times I went there, I couldn’t figure out whether they were still doing swaps. If they do, I cannot find where/how.

As you know, I’m not a fan of all-natural perfumes - as in “something I’d wear” but everything that concerns ingredients themselves fascinates me so it was interesting to read about tincture’s changing color.

I expect I did get the sample on MUA - good thinking. I did something like 65 trades there all told.

I remember your not liking natural perfumes, and I only care for some of them, but this was a hit all right. And as you say, the whole business of the tincture changing colour is inherently interesting.