TePe or not TePe: my interdental 'journey', and a flossing epiphany

Sorry for the long gap between posts: this was partly due to another fitful procession of tradesmen, compounded by a stinking cold, which I still have, but with any luck you won't catch it from my keyboard. My sense of smell is a distant memory, so I really don't feel like writing about perfume at the moment. I have even been off alcohol, would you believe, which goes to show how rough I have been, though last night I 'made myself' have a gin and tonic, as I still managed to get a massive amount done this week, and wanted to mark that achievement alcoholically, as I do. The lime was doubtless good for my throat anyway. ;)

So instead of a perfume-themed post (again!!...I know, I know...I promise they'll be back), I would like to share my recent - and quite profound and far-reaching (literally, haha) - flossing epiphany.  I will use a more or less chronological format for the flossing methods I have used over the years, setting out the pros and cons of each. For it is certainly the case that interdental implements have evolved no end since the early days of wooden toothpicks.

But they are a good place to start, come to think of it. ;)

I remember these going right back to my childhood, usually kept in a little glass jar in the centre of a dining room or restaurant table, along with the condiments. If you were among friends or family, it was acceptable to have a good old rootle around your gums after your meal, even in company. The downside of these 'old school' toothpicks - which for any knitters amongst you very much resembled extremely short double-pointed needles - is that they were invariably too fat to get into any but the widest of interstices. That said, they are good at fetching out biggish pieces of meat or vegetable matter that are wedged half in, half out of a tooth, say. (Sorry if that is too much information.)

I didn't really get into flossing proper till my 30s, when I dated a guy who was evangelical about flossing twice a day and took absolutely forever over it. Even at that age he had had problems with receding gums, and we went to LA together in 1994 for him to have cutting-edge dental surgery - cutting being the operative word! - which involved his gums being cut and flipped back and somehow coaxed into re-affixing themselves lower down the teeth afterwards. And no, I really don't know how that was done, but it was the sort of semi-cosmetic dentistry for which Hollywood is renowned. And then he engaged in a spot of primal screaming therapy while he was there. I can understand how the mere fact of having your gums rearranged may have driven him to such a thing, though he did have other unresolved personal issues not related to teeth. Anyway, his flossing weapon of choice in those days, which I do still occasionally resort to today, was a reel of coated thread that you cut to the required length.

The pros of thread are that it is cheap and quite effective. However, it can hurt your gums by cutting into them (here we go again with our cutting imagery!), plus it is only deployable where you have double-sided access. There is no chance of using it in some tiny crevices on a back molar that can only be approached from the front. Plus it makes me salivate an unseemly amount, so is messy! 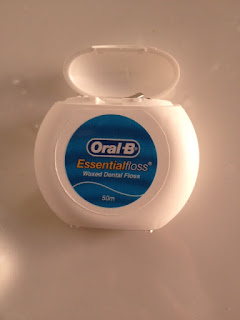 These are a supposedly convenient format, where a piece of floss thread is strung tightly between two prongs of a plastic pick. They remind me of a small hacksaw crossed with a bow and arrow and are neither use nor ornament - or not in my mouth. The locations where you can insert the floss part and not find the plastic frame bangs into your teeth at the same time are few and far between.

I don't know when I gravitated to these - it was probably at my dentist's suggestion - but they were my go-to flossing tool of choice for a long time, even though they were also deeply flawed. A pack of about 5 or 6 costs around £3 (if you get the actual brand, TePe), and they were almost always sold out of my size - .45mm ie the orange ones. Buy a size up or down and they would be so big you'd be ramming them pointlessly in between your smaller teeth, while the overly small ones rattle about from side to side and don't get that optimum traction for poking stuff out. (I have a friend who owns TePes in about four or five different colours, each dedicated to about three teeth each, but such a systematic approach is much too fiddly for me, even if they do look quite pretty lined up on the edge of the sink.)

To the lack of availability issue in my preferred size add the fact that TePes - the branded ones, but also to varying degress every single own label and budget knock off on the market (and believe me, I've tried them all) - are flagrant examples of built-in product obsolescence. Even if you have bought the correct size for the majority of your teeth, the TePes or their equivalent invariably crumple on impact after a few teeth and are as good as useless from that point on. As well as crumpling and bending into unusable shapes, I have had some cheapo ones that actually shed all their toilet brush-style fibres in between my teeth, making them feel like there was more stuff trapped in them than I started with, because there was! This left the TePe wannabe as bare steel, which was like flossing with a straight bit of barbed wire. That way lies bleeding gums, trust me on this. 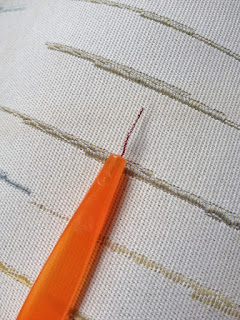 Not so long ago I was staying with my brother and sister-in-law and they introduced me to a different kind of toothpick - a flat, tapered plastic white spear, that was completely flexible and seemed to fit most of my teeth except the ones with really tiny gaps. So technology has clearly come on a lot since the days of the wooden ones and I was really impressed with these, which are washable and reusable to boot. They are quite hard to find, plus I cannot even remember their name, but meanwhile, I have recently made an even greater discovery...drum roll...

I found these quite by chance when failing (yet again!) to located the .45mm variety of the classic TePe style. They are a slight enhancement of the bendy white plastic toothpicks, because they are very fine at the tip, but graduated in width so by the time you get to the hilt, they are suitable for the gappiest of gaps (in my mouth at any rate, and excluding the gap where I had a tooth out and didn't put anything in its place, haha, which would take some bridging!). They are also incredibly flexible and bendy, to the point of going 'boing' when you flick them. Okay, maybe not quite. But they fit absolutely every tooth, you get tons of them in a pack, they are reusable quite a few times before you may accidentally deform the delicate fine tip. And of course your mileage may vary. I mentioned them to the friend with all the colours of TePes - and teeth of different sizes - and he said they didn't work for him. So probably if you have tighter teeth in the main they will be a perfect solution, less so if you have a more gappy arrangement. 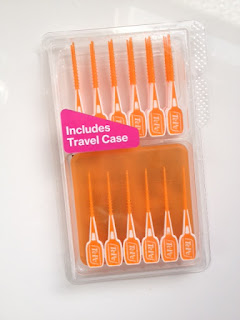 That said, they do come in two sizes: M/L (in blue) and S/XS in orange - there is more info in this link, and no, I am not on commission or in any way associated with the company. ;) If one of the variants of TePe EasyPick is suitable for your gnashers, the savings are potentially huge! I for one am smitten. And my interdental detritus is history. 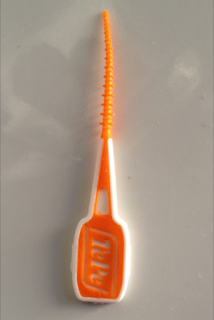 Having suffered from overcrowding for years and had 3 teeth removed to help ease the issue, I thought I could avoid flossing for life. My latest dentist however disagrees. I've found it such a pain trying to get the floss between my teeth - while trying to avoid the prohibited sawing motion - I'd given up for a while, but you've spurred me on to give it another go. Oh and 'rootle' is such a great and little used word!

Yes, you definitely want to avoid the prohibited sawing motion! That just cuts into your gums. These could well be the way to go - the smallest tip I have ever come across, yet one which 'expands to fit' the further you poke it in. They really are the business - and some of my teeth are quite tight together too.

As you know, over in the New World we take tooth health very seriously indeed. In case you are willing to reconsider floss, Oral B's Glide does NOT shred. (That was always a horrible feeling, worse than not having flossed at all.) Believe it or not, there is now a Luxury floss category - I have tried Cocofloss (in coco) and while it does seem to get out more debris and has a nice taste, I am not sure it's three times better than Glide, at three times the price...AnnieA

Indeed I do know, and am glad to receive tips on dental health. I don't remember thread-style floss shredding as such - my main issue is the cutting into gums. Perhaps I haven't tried the latest version of Glide. I did smile at Luxury Floss as a category, hehe.