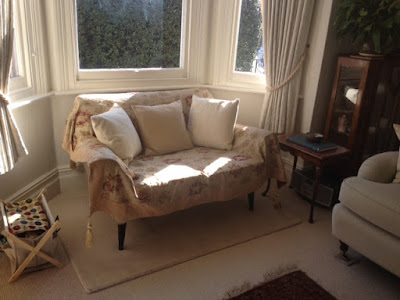 Well, there's me waxing lyrical in my last post about the fragrant sillage of my house guests, when all hell breaks loose...Oh, the latest chap to stay borrowed my shower gel - a manly green coloured hotel freebie - which isn't the same thing at all as scenting the house with something he had brought with him. ;)

Yes, the first (allegedly) malodorous incident turned out to be a whiff in a pan - well, no whiff at all really. My good friend Kate, known as 'Crafty Kate' in our crafting circles, is a home interiors magpie who has an eye for - and is passionate about scooping up - a bargain. Her house is already filled to the gunnels with an eclectic and quirky assortment of furniture and artefacts she bought for a song, so to satisfy her ongoing acquisitive urge she has now taken to searching for items for her friends - often unprompted, but very often things we never knew we really needed till she drew our attention to them. And thus it was with a little two seater sofa she spied up in The Potteries for £20. Sort of mid-century, but with rolled arms that nodded more towards retro styling. Neutral beige woollen covers that had the odd grubby mark whichever way you turned the cushions. But hey, £20! First of all I had to clear some space in the bay window of the front room, which necessitated the re-homing of a very tall elephant's foot / pony tail palm with my neighbour two doors down. She was absolutely delighted, and has put the plant in the exact same spot in her bay window. With that I donated a lightly used tub of Oreo ice cream, of which she said her two little boys would make light work. 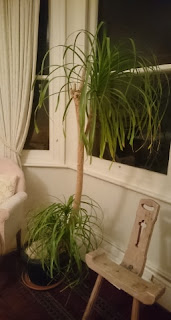 And so it was that Kate turned up yesterday with the sofa, which she had collected in her work van. I did pay her for the cost of borrowing the van and something for her time, in case anyone thinks I am a complete freeloader. 'Free loader' being the operative term! The first thing she asked was whether I had any Febreze or other deodorising fabric spray, as she reckoned the sofa smelt 'a bit 'erbal'. This being code for...well, you can guess what for. I said I didn't mind a bit of 'erbal actually, given that you only have to walk down my street to - perforce - end up 'passively spliffing' in the ambient air at several points. Anyway, I gave the sofa a good old sniff, but frankly I didn't detect any smell really, other than a sort of 'old wool' one, which was not at all objectionable.

So we moved the sofa to one or two places in the room, and after Kate - and another friend who had taken custody of a throw K had also hunter gathered on the same trip! - had gone, I spent the next hour and a half rearranging all the furniture some more. And then some more again. I have put a throw over the little sofa for now, partly because of the grubby marks, which I may address at a later date, but also because the simple addition of another fabric made it fit nicely into my scheme.

So that was that...and then the same morning I smelt the most potent pong at a specific point half way down the hall. It made me catch my breath, it was so unpleasant, in a rotten egg / sewage kind of a way. I puzzled over this long and hard, looked under the hall furniture for a possible present from Truffle, rang my friend Gillie to ask her about the likelihood of a localised gas leak, and generally fretted a lot, thinking my house was unsafe, smelly, or both. And then something made me pull out a trainer (as in the shoe, not a fitness professional house guest who forgot to check out ;) ) from under a chair, and I suddenly spied a dark furry mass nestling inside. Nestling, and oozing...Having tossed the mouse, I examined the dark patches its partly decomposing body had left behind. Too extensive to disinfect/sterilise and wash in the machine, though I did have a go. Before tossing the wet trainers as well. Luckily, a cursory rummage in my T K Maxx receipts - yes, I really do have a separate folder for these! - revealed that I had only paid £12 for them in the first place. But still, it was a stomach-churning episode, second only to the discovery of an even more decaying mouse corpse in the loo once.

And on that unsavoury note, I will dream of more Airbnb guests coming, bringing fragrant bodycare products with them to fumigate the house...;)
Posted by Vanessa at 09:08

OOOH! I love rehomed furniture. Both our dining table & chairs and couch are rehomed lovelies. The couch from a very posh friend's apartment in Sydney's CBD, chairs from a friends restaurant before a refurb and the table bought at an antiques store many years ago.
Ew for the rotting mouse. BLEAUGH!
Portia x

Good to meet another furniture rehomer! Three of my sofas are that, and the pale green one in the picture was also a bargain from a commercial sofa manufacturer that did private sales on the side. Your couch sounds amazing. A friend of mine recently acquired a very high end tap, that her brother rescued when a posh couple were ripping out their kitchen!

Oh to have a Kate in my life! I LOVE you home V and how you've decorated and furnished it.
Whenever I looked for 'vintage' furniture, it always needed someone to pick it up, except for the chest of drawers I eventually found.

I used Oust on my bin and it really worked!

Transport is indeed half the battle, if not most of it. I have landed on my feet with Courier Kate, no question.

How did you apply the Oust to your bin?, only the sachets are quite small, and bins potentially very large, depending which one you mean. Am always after cleaning tips!

Well, this tale certainly took an unexpected twist! Here I was, thinking that it was, in fact, the sofa that had started emitting noxious fumes overnight (*gasp*!) ... thank god you could solve the problem quickly though! But ehm... how did a dead mouse end up in your shoe in the first place (am guessing Truffle?) and how come it only started whiffing now? fascinating...Also, thank god you discovered it now, not after you spent a week in France or something... oh the horror! Cute sofa by the way! cheers, Wendy

It comes in a spray can so I just blasted it!

Was the mouse deposited in your trainer as a gift from Truffle? My old cat Holly use to put little presents (eg baubles from the Christmas tree) in my shoes. Or had the mouse decided to make its home there of its own accord?

A good natural deterrent to Mickey and friends is citrus oil - get a really strong essential oil (lemon, lemongrass or lemon myrtle), sprinkle drops on pieces of kitchen roll and put them near the rodents' routes. Smells nice, even if it doesn't work!

The first 2 years of our life in the U.S. most of our possessions, not just furniture, were re-homed things, and we were extremely grateful to all contributors. Since then I paid it forward with several nice pieces of furniture.

... And when you say “borrowed,” did you actually mean asked for, used and returned, or was it a euphemism for “took and left with it”? I’m just curious :)

It was fortunate that the alleged sofa smell turned out to be a false alarm. ;)

Truffle was the culprit, no question. Either putting the mouse there or chasing it round the house into the shoe till it died of fright while hiding. It has been warm this week, which may explain the onset of whiffy decomposition. But yes, so glad it wasn't undiscovered for longer. Eeugh!

I think Truffle put the mouse there personally, though those are the two possible theories. Lol at Holly's festive footwear offerings. ;) The citrus oil sounds good,though I am not sure I know the rodent routes. As you say though, it will smell nice anyway!

PS Kind of you to say the house is looking good. Only if Truffle does not make it into the front room...;)

We may never know how the mouse got there, but I hope there is no repeat of the incident.

Interesting to hear how you acquired furniture over time. Great that you had friends to help out when you were first over. That must have made you feel welcome.

The guest used a bit of shower gel and put the rest back, haha. He didn't ask, but I put it there partly with guests in mind. ;)