Brief - and Wet - Encounter: meeting Undina and her vSO on a rainy day in London 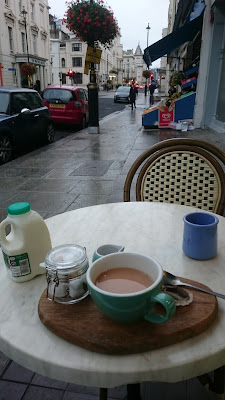 The keen-eyed reader - if I still have any of those left given the sketchiness of my posting frequency - may have noted that I have yet to post Part Two of my report on the US tour with The Monochrome Set back in March. I am not sure why I didn't finish the travelogue closer to the time, but the band are going back next spring (I am giving that one a miss), and could always post Part Two as an anniversary tribute while they are actually on the road over there, possibly having similar experiences(!). We'll see... But meanwhile I have just returned from a rather fraught week with them in Germany, and as that is top of my mind at the moment I shall make it the subject of the next post. Lord knows it won't be the first time on Bonkers that I have cocked a snook at chronology. ;)

Now the last time I saw Undina and her husband was during that trip in March, and by a quirk of chance, I got to see them very briefly the day before I set off on this latest one. I can't be sure that we will always keep up such tidy synchronicity, but for the moment I associate band tours with meeting The Undinas.

The travel issues referenced in the title started at Stafford in fact, when I discovered a sleeping man in my forward facing, window, power socket-supplied seat. And next to him, his sleeping girlfriend with her head on his shoulder. I let it go, though friends have since suggested that he was probably faking it, and that I should at least have given him a hard stare or an admonishing poke.

Undina and her vSO were flying into Heathroom from the Ukraine at the same time as my train arrived in Euston, but it took a while before they finally got their bags and could make their way to their Airbnb in Bayswater. They were due to pick up the keys to it in a little supermarket nearby, so I staked the shop out from an outside table at the cafe next door, despite the inclement weather.

Eventually the by now familiar pair hove into view, suitcases in tow, and we hurried to their apartment as best we could in the pouring rain. The first time I met Undina and her husband was also at their accommodation - in Paris back in 2013. I got there first, and the landlady showed me up, and explained how all the various appliances worked, including the all-important washing machine. In a neat parallel, when we got into their flat this time round, the first thing Undina wanted to locate was a washing machine. We eventually found it, and a drier, concealed in cupboards in the living room to the right of the fold up bed (also concealed in a cupboard). The kitchen wasn't concealed in a cupboard, but was barely bigger than one, and we remarked that it was the smallest kitchen we had ever seen. Everything else about the apartment was perfectly proportioned, and there were tall windows overlooking the leafy terraced street through which one could comfortably pass an hour or six staring at the pouring rain. 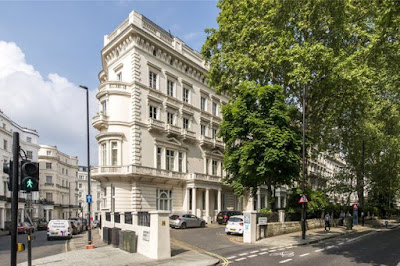 While the pair were still getting their bearings in what was to be their home for the next week, I handed over a pint of milk, which I had bought round the corner, thinking it one of life's absolute necessities, right up there with the washing machine. Having recce'd their accommodation and its compact amenities we collapsed on the sofas, and the ritual exchange of perfumes between Undina and me commenced, preceded by the ritual exchange of small presents (I wasn't counting the milk). Undina gave me a cat-themed foldaway tote bag from Ulster Weavers, which - given where I am from - is a welcome example of carrying cats to Newcastle...I mean Belfast.

Meanwhile, in another neat parallel, I gave Undina a make up bag / pouch with a Voysey-esque design on it. I bought it from a museum shop in the UK, but couldn't resist a wry smile on spotting that it was in fact by a brand in New York.

Although it was only a short catch up, there was also time for Undina to show me several extremely sweet videos on her phone of Rusty having his tummy stroked. As they were away for a while this time, they had engaged a live-in pet sitter, whose daily footage of their blissed out cat was testament to the fact that he was being well cared for in their absence.

Now I am back from Germany, I am just getting into trying the samples Undina gave me. She has a very good sense of my taste - which could be summed up in a nutshell as furry ambers and powdery orientals for winter, and sultry florals or refreshing colognes for summer. For our meeting I had drained the last of a sample of Long Courrier, from Pierre Guillaume's The Cruise collection, which was kindly donated by Sabine (Iridescents) many moons ago.

I see that the name means 'long distance flight', which could certainly apply to the one Undina and her vSO had just come on.

"...a solar oriental built around a core of salty vanilla, the perfumer evokes faraway destinations, beaches on the other side of the world, lazy days gorged with sea spray and the delicious scent of suntan lotion…"

In hindsight, that was an ironic choice for a wet and blustery autumn day in London, which set the tone for the wet and wayward week that followed in Germany, of which more very shortly! 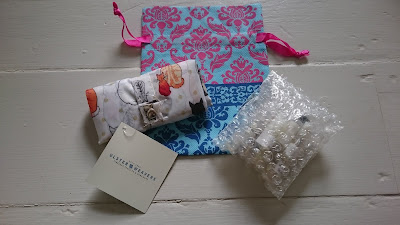 Editor's note: special thanks are due to John, the band's keyboard player, who kindly stowed Undina's samples in his instrument case for me, as I was travelling on hand luggage only, and they wouldn't have fitted in my already bulging(!) transparent plastic bag you take through security.

I'm sorry to hear your time in Germany was fraught, V but it was good that you got to meet The Undinas before you set off. They are such a wonderful couple and great company.
I also got to meet them a few days later and was amazed at the sound of the 'kitchen in a closet'. Yet, they bathroom had a bath!

It was still very good, but with a large side of fraught, you could say. ;)

It was Friday you met, right? I did think of you that day, and imagine where you might have gone sniffing. I also asked Undina if her perfume mojo was still firing on all cylinders as I sensed it was, and she confirmed this. I do depend a lot these days on the enthusiasm of Undina, you and Val to pick out things I might like, as I lack the strength to go searching for good new releases myself. The launch of Bengale Rouge was a bit of a turning point for me, as I was so smitten with that I felt I could cheerfully batten down the hatches and tune out to anything else in future. But in reality my door is still ajar, and periodically one of the three of you will stick your foot in it and go: "Oy!"

COMMENT FROM VAL THE COOKIE QUEEN, REPOSTED HERE BY ME BECAUSE BLOGSPOT'S COMMENTING FACILITY IS SO APPALLINGLY UNFIT FOR PURPOSE.

"I have turned on the desktop and am attempting to post a comment here. I would have loved to have met up with the Undinas again; unlike you and Tara, they will drink extremely strong coffee with me. ;) Had I not been in Scotland I would have come over to have met up with them, or at least met with you. I seldom go away, but this time I missed everyone! I would stay in Bayswater, rain or not, in a flash. Nothing more British than a pint of milk!

Talking of new perfume, drop into somewhere where they sell NARS, if you have the chance. Their first perfume, created by Olivia Giacobetti, celebrating 25 years of the company, is now available. Audacious. I was about to order it blind, but someone is sending me a sample first. I am going to try and push a button and see if this posts now. First I will copy it. Bussis. CQ"

Very sorry for your frustrating time trying in vain to post a comment yourself. Blogger has really shot itself in the foot over this dreadful aspect of its (non-)functionality.

Sorry too to miss you during your visit to the UK, but look forward to hearing about your Scottish meet ups and other adventures, some involving indigenously-produced alcohol I believe.

And thanks for the tip off about the new NARS scent. Is it called Audacious or is that just your take on it? Let me know...no, obviously don't, or tell me on Messenger. ;)

If Audacious is the name, we are one step nearer to Andy, the bass player in the band's wish coming true that someone will release a perfume called Incorrigible.

Hallelujah, Great Balls of Fire, and other exclamations of happy disbelief!

SO JEALOUS Vanessa! You all get to spend time with Undina and I've never even met her.
Sounds like you all had a wonderful time. That Cruise Collection doesn't get the love really. I am a fan but the scentbloggosphere remains pretty quiet about them.
Portia xx

It was great to see you, though I wish we had more time (and a little less rain. Maybe :) ).
I'm happy to report that one of the samples I got from you is hitting the spot (I might even write about it if I ever get back to writing, which I plan to do but just can't find time and energy).

(Off to read the next part of your trip)

I can't believe you haven't met Undina. I always think of you as knowing everyone! I do agree that the Cruise Collection is rather under the radar, but Long Courrier is a big favourite of mine, now sadly used up. xx

You did have a lot of rain that week - I hope it didn't put a dampener on your plans, but at least you could hop on the tube to get most places.

Your samples to me have had a very high hit rate - the Cinammon Projects one, whose note list should have had me running scared, is surprisingly lovely on, and there were several other successes.

Hope you have settled back in at home without too much jet lag.