Hyacinth harbingers, and the final phase of the utility / shower room makeover 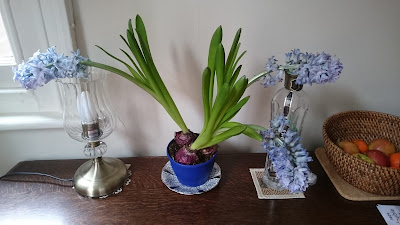 Well, I don't know about you, but I would say 2020 has been a bit of a rum year so far. The uncertainty about Brexit has been supplanted by uncertainty about the Coronavirus, and having sprained my pelvis over Christmas, I have now managed to sprain my foot as well, though luckily not to the point of non-functionality. And I swear I am not fishing for people's sympathy, for it seems almost laughable...like people who bag Munros or make it their mission to visit every castle in Wales, I appear to be systematically working my way through my anatomy, spraining one body part at a time...! My friend Jim (of perfume focus group down the pub fame) quipped on hearing the news: "A true enthusiast would be doing it in alphabetical order." Waggish Katie Puckrik also weighed in, inquiring whether I had sprained my "ironing wrist" yet. To which I replied:

"Hahaha, thankfully not yet, but if I follow Jim's recommended alphabetical spraining MO above, I shouldn't get to 'wrist' anytime soon. Unless qualified by 'ironing', which would bring the incident forward somewhat?"

And as with the virus, I shall be asking myself: "Is your journey really necessary?", and turning down offers to 'go for a walk' as opposed to walking from A to B for a particular purpose. A spot of self-isolation would not be too great a blow, given the tottering tsundokus on my coffee table, not to mention my current obsession with knitting dishcloths. As you can see, I have been stockpiling books, not toilet rolls or tins of chick peas. Though that has a lot more to do with my tendency towards bibliomania than any formal kind of disaster planning.

Now the start of the year is often rather a gloomy time anyway, with January 6th seeing a peak for divorcing couples, and 18th January being designated Blue Monday, the most depressing day of the year. This date was arrived at using supposedly scientific methods:

"The formula uses many factors, including: weather conditions, debt level (the difference between debt accumulated and our ability to pay), time since Christmas, time since failing our new year’s resolutions, low motivational levels and feeling of a need to take action."

It has, however, been discredited by a neuroscientist from Cardiff University, who dismissed the work as "farcical" with "nonsensical measurements". My sister-in-law also begs to differ, as she turned 70 on 18th January and remained perfectly chipper all day.

Against this background of dramatic world events and bodily gyp, I must say I have found solace in two things: the therapeutic effect of flowers in my own house (notably hyacinths, of which I have been buying serial pots from Lidl for the princely sum of £1.99), and also flowers in that of my friend M, with whom I have a reciprocal cat feeding arrangement. 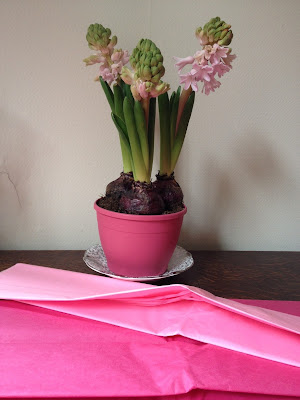 The pink ones were followed by the blue ones at the top of the post! And here is a pretty display at M's house, made all the more fetching in my eyes by the adjacent bottle of wine: 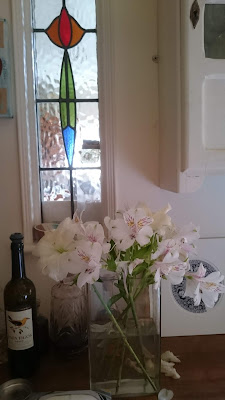 It doesn't count as an uplifting floral, but I enjoyed getting a whiff of beeswax from this tall pillar candle as I went upstairs each day to sort the cat's litter tray. 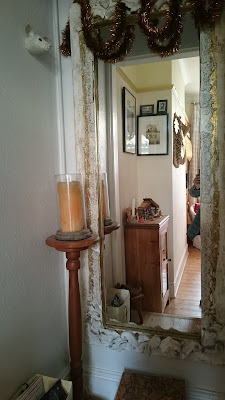 Also offsetting the downbeat feel to the time of year, there has been the relief of finally completing the renovation of my utility-cum-shower room behind the kitchen. Some readers may recall the utter mayhem that prevailed last winter during attempts to level the floor and lay floor covering (in vain!) over the new substrate. I wrote anguished posts on the 'one step forwards, two steps back progress' of the works here, here and here.

In the last of these, I reveal the near completed bathroom side of the room, but the utility side was not tackled for another nine months, and it was only three months after that that the final bits of decorating and touching up were completed. Not by me, I might add, though I did run to B & Q a lot for materials, and was gainfully employed making tea much of the rest of the time.

Just to recap, here are some of the 'before' shots... 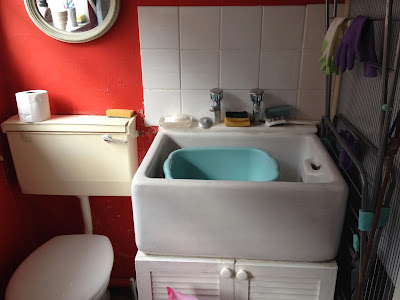 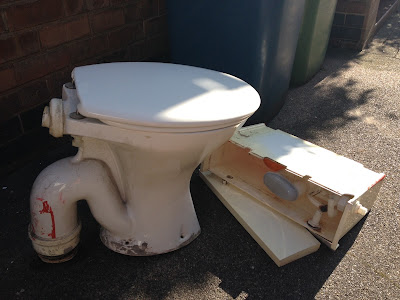 The shower tray leaked under the floor, so when this flaw was finally discovered after three months of daily use(!), the fixture was belatedly condemned and used for storing Hoovers and mops. 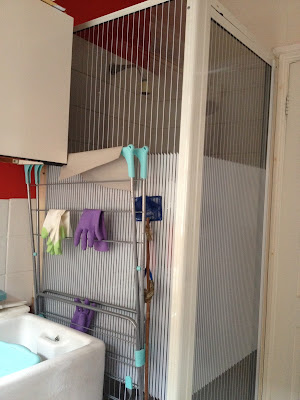 There was a cobwebby vent in the window, and a bizarre metal rod piercing the area immediately above it. 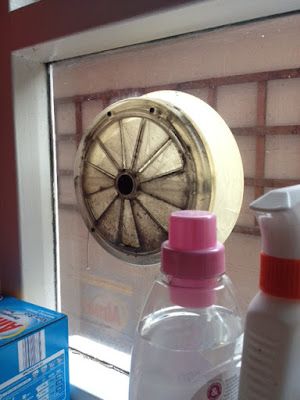 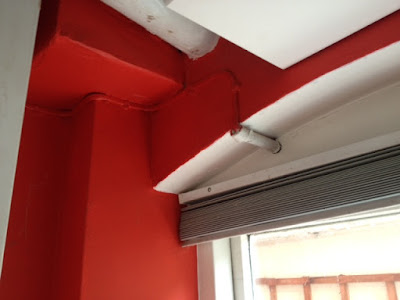 The electrics had to be rerouted from upstairs, as there were two few power points for the number of appliances, and visible plugs also had to be hidden to comply with bathroom regs. 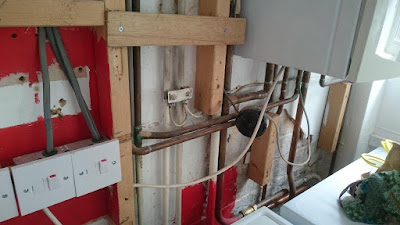 And I was never a fan of the Stoke City livery, so the red had to go...

Then the too short worktop, which I had taken to calling 'Shorty' in a bid to reconcile myself to its 'near miss' nature, has been bulked out with a piece of wood and painted. (The plumber who assembled the unit didn't realise there was an end panel on the side of the cabinet before cutting the worktop to size.)

Shorty before...if you look carefully, you can see that the white worktop finishes a frustrating fraction before the end of the unit. 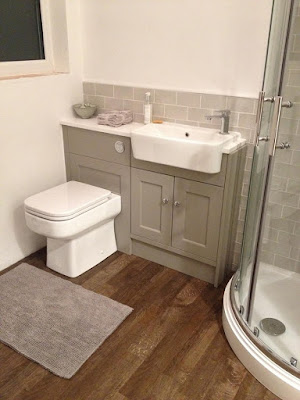 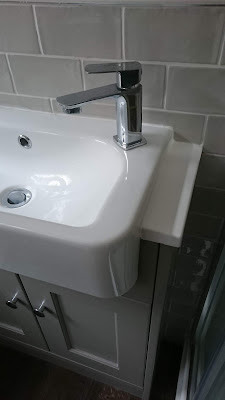 And here is the end result, with shelves stained to match the floor, a mirror and pictures, and other bits and bobs. 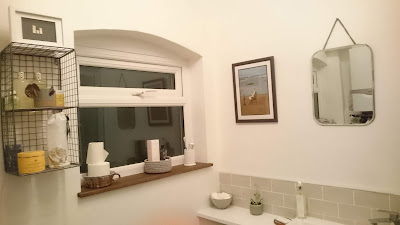 I cut some japonica from the garden, adding a cheery spray of snowy blooms to the window sill. Those are Floris's jasmine-scented soaps, and if I need a bit of a lift, I lean in and sniff them instead, as japonica doesn't really smell of anything, though its blossom looks pretty(!). 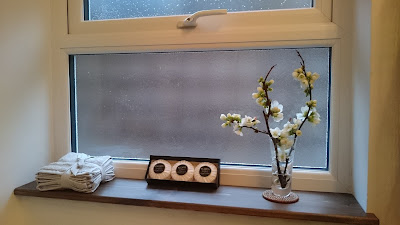 And the utility side, with a new worktop and small freezer, replacing a tall freestanding one that was bigger than I needed and dominated the room almost as much as the condemned shower opposite. 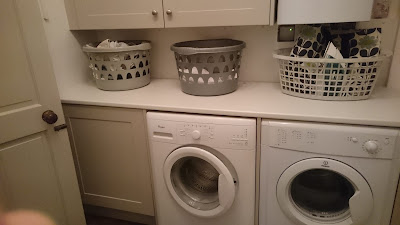 A view of the cupboards on top, plus new boiler! The previous one was 18 years old and on borrowed time, which I didn't feel I dared risk with paying guests. 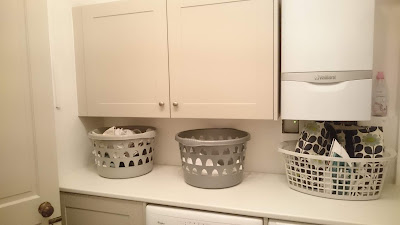 Here is the shower again to complete the virtual tour, though that was finished a year ago. 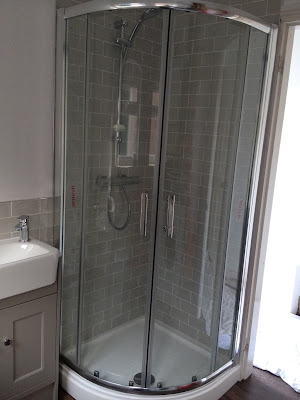 There is so much more to do in and on the house (cracks galore, window repairs, new kitchen one day as the current one is 25+ years old, as well as sorting out the jungle that is the garden - it has been allowed to run riot in recent years due to my woeful lack of knowledge of all things horticultural).

But for now, doing the laundry has become a pleasure - almost - ditto the ironing, until the day I do eventually sprain that wrist... ;) And Lidl still has stocks of hyacinths for when the blue ones completely keel over.

Are you finding comfort in spring flowers or completed home projects...?

And do you also find that hyacinths are constitutionally floppy?

WOW Vanessa,
It all looks so clean and useful now. Congratulations. Renovations are a complete pain in the ass and terrifying to boot.
The flowers look so pretty. I'm not much of a bulb person but the smell is intoxicating. Almost every potted plant in this house has come down from the ones my Mum had in the house. All still healthy and growing, except the African violets which all died within a year of Mum doing same.
Hugs,
Portia xx

What an amazing transformation! It is so stylish and organised. It was worth the nightmare.

Sorry that you are still in the wars and hope that you can stop hurting yourself any more; hopefully you can have a little rest and get to read some of your books.

It's now March and the January blues are lingering; I empathise on the cracks - some the decorator filled only in November reoccurred and it is now apparent they are a result of the staircase not being properly joined to the wall. Joy.

Hyacinths are gorgeous, and yes they do flop. I tie a cotton thread around them so that they can self-support. Does Truffle eat them? Two of my cats try to, and I have to put them somewhere inaccessible and hide them altogether at night .....

Renovations are not for the fainthearted, I agree, and this one has taken an astonishing 18 months from start to finish, which is a long time for such a small room. ;)

I like the thought of your having plants 'descended' from your mother's ones, but am sorry about the African violets and the fact that your mum is no longer around. That 'pathetic fallacy' trick plants have happened here last week: my lodger is sadly going in a few days, and the lemon scented geranium in his room has lost almost all its leaves in a very short space of time as though it is in shock. As I am a bit, as I am sorry he has to move on.

I will really try not to hurt myself again, but I seem to have a real knack for it at the moment. ;) I do intend to read more, so that is one benefit of being less mobile.

Sorry about your recurring cracks - can you get someone to re-join the stairs to the wall, as it were?

I guess I could tie a thread round the hyacinths, but I do find threads a bit too visible and may simply put up with the flopping. Truffle is not the least interested in plants, luckily.

So hoping you will be free of injury in the future. But accidents are just that - if you could avoid having them, you would.

It's a major job to attach the stairs to the wall and seems to involve removing the plaster and big bolts .... I think we will shut our eyes as we go up them for the time being.

Invisible thread! That's what I use!

Glad Truffle is not a plant-eater.

Those compound injuries are awful: you live, not doing anything out of the ordinary - and BUM! I hope you’ll heal those that you’ve got faster than you acquire new ones ;)

I’m hyperventilating from just thinking about any remodeling. And I’m extremely impressed with your efforts. Do you want to come over and supervise a project at my house? ;)

Yes, so true about accidents...clue in the name, as you say!

Oh dear, sorry your stairs issue is so complicated. I have found some unexplained scratches on my car today and am adopting the same approach.

Invisible thread? I have only heard of invisible ink, and then only in Enid Blyton. ;)

LOL at the notion of my healing faster than the rate at which I acquire new injuries.

I don't think I am allowed to travel anymore, or I would help you out with your refurbishments like a shot. ;)

And apologies for the long delay before answering your and Jillie's last comments - Blogger only sent me notification of them yesterday.