Antidepressants AND Tolkien!: the therapeutic power of nature walks on your doorstep


So the first part of the title to this post may need explaining, being a loose adaptation of a quiz doing the rounds on Facebook to which my godson alerted me, called: "Antidepressants or Tolkien?" 24 names flash up on screen and you have to decide if they are the actual name of a character from The Lord of the Rings or The Hobbit OR that of a currently prescribed antidepressant.  Not having read any Tolkien except The Hobbit (nigh on 50 years ago!) I was absolutely pants at the quiz. This is also because - despite carrying out numerous market research studies in pharmaceutical topics in the past - I don't think my path crossed SSRIs and their ilk at any point. So I had to guess at every single name except Cymbalta and Bilbo. If you are a Tolkien fan or a pharmacist, you will ace it I am sure!

And now to explain my substituting of "AND" for "Or". Basically, I have been exploring long neglected green areas in my town this week - by me I mean - and discovering some new ones, and was struck in a couple of places by their resemblance to a Tolkien-like wood. And I do know about that at least, if not the characters in the books, for a number of scenes from Tolkien-influenced Game of Thrones were filmed in that forest I mentioned in my recent hermit and hand cream post. As well as elsewhere in Ulster in familiar beauty spots from my childhood. Plus Tolkien lived in Staffordshire for a while, and was inspired by some of the gnarled old oaks on Cannock Chase, as referenced in my review of Liz Moores' Dryad. So that is all by way of explaining my Tolkien-esque foliage-spotting credentials. ;)

These bursts of extreme exercise - each walk was about three hours long - were prompted in part by ongoing pain issues from my sprained pelvis. I thought I would try flooding the area with the dopamine known to be released by (a compatible form of) physical activity, of which Val the Cookie Queen is of course the poster girl. At the same time, I figured it might improve my mood during lockdown. The lack of control and uncertain future are two aspects I continue to struggle with, and Ian McEwan hit the nail on the head in his recent essay on time:

He quotes Kierkegaard to start with:

"Life can only be understood backwards, but it must be lived forwards."

McEwan adds: "When that forward motion is denied, then you are liable to go tumbling backwards through time."

I presume he is talking of not being able to look forward to anything, and the mental freefalling that may ensue. At least we can now meet one person from another household in an outdoor setting, which feels like a big win after the constraints of lockdown so far!

The first discovery I made on Day One was of a treelined path that led all the way to my local Aldi from just beyond the road at the bottom of my street. That could make the dreaded shopping trips more agreeable, assuming I wasn't driving, obviously. 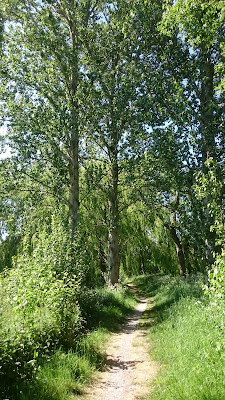 The second discovery was of a lake behind the rugby club, complete with anglers, hidden knots of youths at the water's edge sharing a spliff, and ducks with attitude. 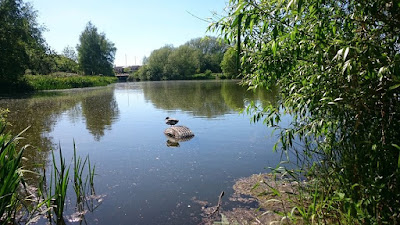 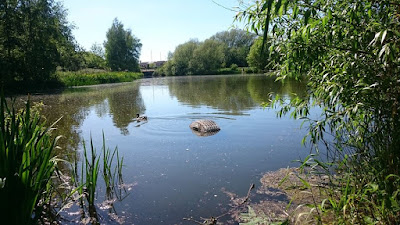 Next up, I chanced upon a venerable shoe company, called Jen. This sign dates from 1963, but the company's roots stretch back to the 19th century. Footwear used to be a thriving industry in Stafford, which was also home to the better known brand Lotus. 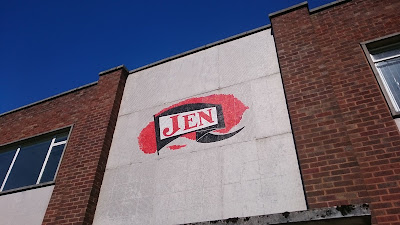 My friend David, the artist, was commissioned to make a stained glass panel for St Mary's Church in town to commemorate this 'last-ing' legacy. ;)

A few minutes later, I was in the atmospheric shade of a path up to the castle, which snakes between the manicured green sward of the golf course. I saw a fox, though barely captured him on camera before he ran to ground.


The castle dates from 1100 AD, albeit there is not much of it left. You can see for miles around, and once again, the grassy slopes below were dotted with groups of young people sitting chatting - in a vaguely socially distanced way, aided by their recumbent bicycles. No, not that kind of recumbent bicycle...! 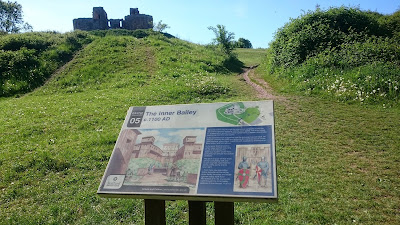 I have stopped tutting at such scenes, ever since I learnt that if you are young you are more likely to be die by being struck by lightning than of Covid-19. 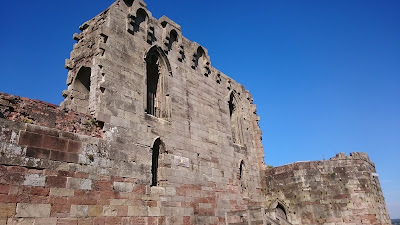 The following day, I did a circuit of Doxey Marshes, a nature reserve beloved of twitchers and dog walkers alike, which backs onto the estate where I used to live. As a born again bird watcher, I was pleased to see several varieties, two with babies in tow: 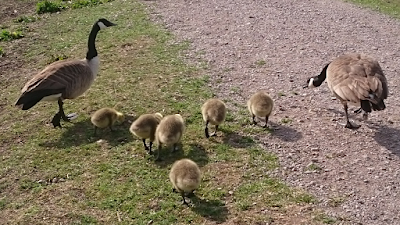 In this long shot, you could fancy yourself on safari (almost!) 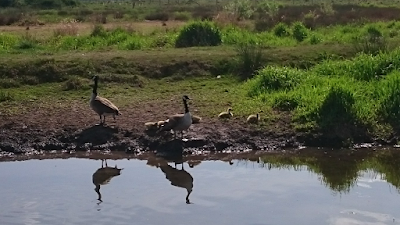 One of several laid back swans: 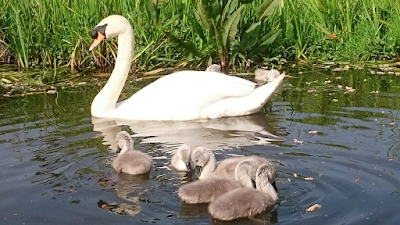 Not forgetting their synchronised cygnets. "A cygnet ring!" as the aforementioned David waggishly remarked. 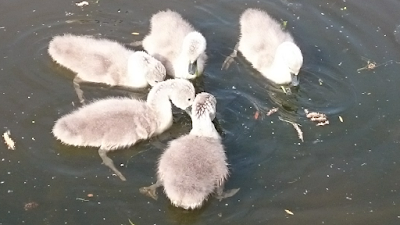 There were cows galore as well, both reflective and reflected. Here is one, ruminating and watching the world go by. 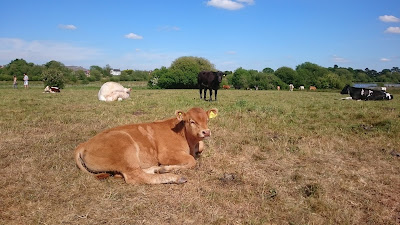 And now the startling sight of "La Vache Qui Pee". 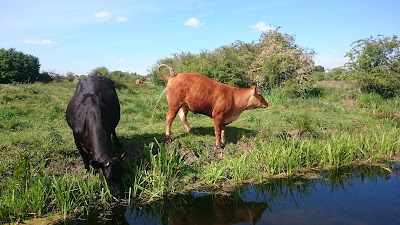 Why, that will be due to all the drinking of course! Note the mirror images in the stream. 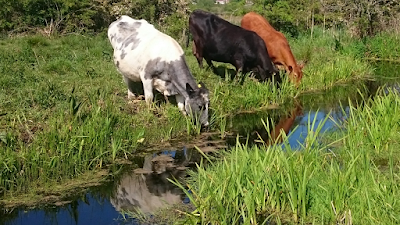 I also managed to pap this squirrel, doing a good imiation of Cerberus perched on a gravestone in the adjacent cemetery. 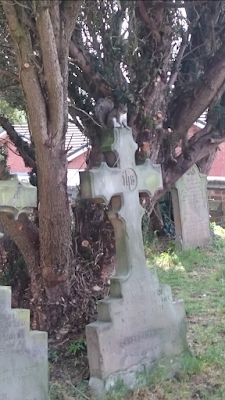 It has been too blowy over the past couple of days to walk very far since, but more explorations of Stafford's green interstices are definitely on the cards. Along with that Undina-inspired post I mentioned earlier...

Beautiful photos, excellent puns and general loveliness. Nature really is rather gorgeous.
Thank you for making me smile! I am still giggling over La Vache qui pee ...
Jillie

Beautiful pictures! I love walking under trees. So, the paths you chose look very inviting. I hope you’ll enjoy more discoveries on your future walks, and your body won’t object to that activity.

I have to ask! Did you try to read Tolkien and didn’t like it, or did you not even try? I’m not a big reader these days (and I decided to stop feeling guilty about it - maybe one day I’ll get back to reading again), but I remember that I loved Lord of the Rings when I read it more than 2 decades ago. It is well written, smart and entertaining. And it’s a long book, which is good in terms of vesting your time and involvement with characters.

I was gutted I only got 16 out of 24 for the quiz b,eing acquainted with both Tolkien and antidepressants. The ones with the accents were a big clue too as you don't see those on your average SSRI.

lovely pics and it's so nice you're making new local discoveries. I particularly liked the tree lined pathway to the magical realm of Aldi.

Glad you enjoyed the post, and that you are familiar with the cheese in question. ;) Nature is indeed putting on a good show at the moment, as with the lilacs. I bet it is lovely down your way too.

You have a lot of very impressive trees to walk under in your part of the world - or neck of the woods, should that be? I did think of NorCal when I took the top photo, and my friends who used to live in Occidental, completely surrounded by tall redwoods.

Okay, so I don't think I ever tried to read The Lord of the Rings, but I am not drawn to anything of a fantasy nature as a rule. Never read Harry Potter and didn't get on with Terry Pratchett, to give you an idea. If I really am missing something do poke me in that direction again, but as Tara knows I prefer human action rooted in familiar settings. I am not even overly keen on books set abroad, haha, that is how limited my taste is. Though I routinely make exceptions for North America, and selected countries in Europe...!

I also don't like long books, almost on principle. I can stretch to 300+ pages, but a book has to be exceptional to keep me reading that far. ;) My heart would probably sink just picking up something as fat as LotR.

I was quietly hoping you'd do well at the quiz - or better than me, certainly - I think I got 14, but it was mostly dumb luck. You would really have to have been on an awful lot of different brands of SSRIs to have a hope of doing well. Hence why I thought only a pharmacist - or therapist maybe - could find it a breeze. I laughed at your comment about the accents...that was a clever inference to make.

I also smiled at your mention of the 'magical realm of Aldi', hehe. Even more magical if we could just lose the people shopping there...;)

I wasn’t surprised to guess just 15 out of 24 since I last read Tolkien a couple decades ago AND not in English. But even A., who is a huge Tolkien fan, who re-read it more recently in English, and whose memory for names is superior to my, guessed correctly just 19.

I got 14 out of 24. I’ll take a score > 50% ... I am not fussy. I think the accented names were meant to stupefy. That said, I’m glad you’re able to go out and about and was pleasantly surprised at what you otherwise would have missed under different circumstances. As for me, whatever walks I do tend to follow certain paths where I think I will not encounter many people other than those who happen to be outside their homes. I have a shortcut consisting of residential streets, a community center parking lot and a wide 6 lane highway that hasn’t seen much traffic since the pandemic, to get to Wegmans were I to feel like I need to purchase something I can easily carry home. Oh, and if I were to encounter a cow on my walk, I would probably scream, but not so a deer as I’ve seen them in these here parts over the years, much to my surprise!

I just looked it up and if you include The Silmarillion there are 982 character names!

Interesting to get those scores - my 14 doesn't sound too shabby, but this is largely chance as I say. Tara's discovery of the sheer number of characters across Tolkien's work explains a lot!

Thanks for stopping by!

Haha - we got similar scores. Yes, there is that issue about choosing routes where you won't bump into people too much. I do feel a bit better though since learning that the risk of dying from Covid-19 in my local area is a quarter of one percent so far, which puts things in perspective. I am still taking care, though, as this virus is so individual in its effects.

That is a staggeringly high number of characters! Yet another reason why I don't think Tolkien is for me. I'd need a glossary to hand as I would forget who was who. The Forsyte Saga was challenging enough. ;)