"Whose that vial?" The tricky - and tracky! - business of tracing perfume samples... 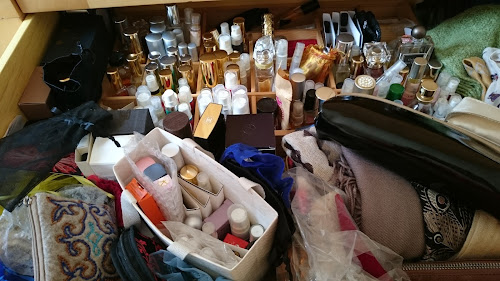 A while ago, Undina wrote a post about Jo Malone's Sweet Milk, which prompted me to have a look for my own sample of that scent. I was going to donate it to her, not least because it was she who had given it to me in the first place. ;) In the course of my concerted rummaging, I came upon dozens and dozens of samples and decants going back ten years or more: some bought from online sites like The Perfumed Court and Lucky Scent, some gifts from fellow fumeheads, and some received in swaps on Makeupalley, where I clocked up an astonishing 75 trades back in the day when you could send fragrance internationally. Now Undina is noted for her typed labels on vials, but many of the samples I uncovered had handwritten ones. I soon became completely absorbed in trying to remember where they had all come from, either from my own recall of the transaction, or by recognising each person's handwriting. This was by no means as straightforward as I thought it would be, as I am out of touch with some of the perfumistas who were "on the circuit" up to a decade ago, and am still puzzling over quite a lot of what I found.
So for fun, I thought I would create a gallery of photos of vials with confirmed IDs, and enlist the help of readers to identify the mystery ones. There were way more unidentified fragrant objects where these came from, but I didn't want to overwhelm people with a blizzard of the things. And I haven't been right through my collection either - this is more of a random dive - so there are doubtless other examples I could have put a name to if my search had been exhaustive, as well as many more I couldn't! So I also hope that no one is offended if they do not happen to be represented in this selection.
Known sources
Left to right: Thomas (Candy Perfume Boy), Undina (Undina's Looking Glass), Tara (A Bottled Rose), Birgit (Olfactorias Travels), Carol (Bloody Frida), Sarah (Odiferess). 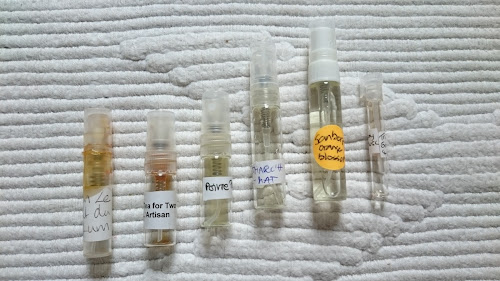 Sources I think I recognise
Left to right: Rachael Potts, Val the Cookie Queen, Marie Pinholt-Krabbe, Freddy (Smellythoughts), Lisa Jones. There is a fair element of doubt about some of these(!). 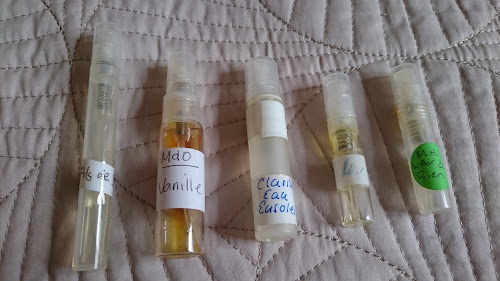 Sources I have as good as no clue about
Though I think the one on the far right may be either from Tamsin Simmill or Louise Bodin. ;) 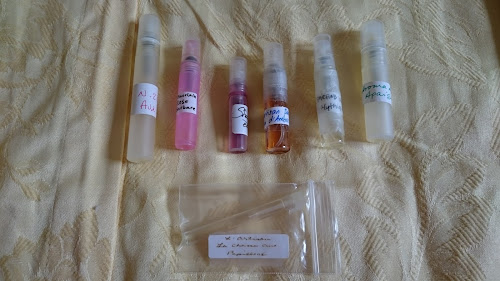 If you recognise a vial you sent me, or have intell on any of the handwriting, do let me know in the comments.
I would also be interested to know if you have this problem of forgetting who gave you what!
Posted by Vanessa at 14:39

Going through all my samples was making me so stressed I gave all but a 'few' away. I couldn't begin to trace the sources. But that is my sample of Poivre Piquant! Sorry I can't help with the others. Did you find the Sweet Milk?

That is very disciplined of you to give your samples away - I have TONS and TONS still, and am wearing one from The Perfumed Court today in a completely doomed bid to make some inroads into this pile. As well as the contents of that drawer, I have several boxes and several more make up bags stuffed to the gunwhales with vials.

I found quite a few from you, including Tauer Zeta and Papillon Tobacco Rose, also Dior Bois d'Argent.

I did find the Sweet Milk, quite quickly in fact, but it had sadly evaporated.

I don’t remember the provenance of all samples I got, especially in the beginning of this hobby, but starting 5-6 years ago, I’m recording this information in my database together with the rest of the information about each sample, so I can always check :)

I don’t think I’d recognize anybody’s handwriting but Lucas’s (his handwritten labels are very good), but if I can read a name of perfume, I can usually find out who shared it with me.

Hey Vanessa,
That Tea for Two could be mine. I think I sent you a little bag of samples at some point.
Going through samples and decants is quite stressful. I did it at the start of the lockdown and sent a whole bunch out in giveaways on our Aussie FB group. There are still hundreds here but I had to walk away for a breather and haven't gone back.
One thing I did do for a couple of weeks was throw a whole vial into my hands and slap it all over me in the mornings. It was a really fun way to experience perfume. Sometimes 3ml at once! No worries in lockdown.
Portia xx

I can't believe you still have that one, it must have gone off by now! I really miss those vials, they came from Poland on Ebay and were so easy to spray into, completely open wide neck. I wish you could still get them
The perfume who sent you La Chasse aux Papillons has extraordinarily lovely handwriting. I feel it would be someone over 50, when handwriting was taught properly in schools.

Now that is where I am going wrong - you are much more organised than me to have a database, in which you can record every aspect of a perfume sample, including its provenance. I don't think I know Lucas's handwriting. Quite a few samples I found have very distinctive writing - I just have no idea whose!

You did indeed kindly send me a pouch of samples - and yes, it is the embroidered one that can be seen in bottom left in this picture! I don't *think* the particular Tea for Two is from you, though I looked in the bag to see if you had handwritten any samples. I think this is an earlier one from Undina, which I found by the Sweet Milk and others in similar style.

How kind of you to give a lot of samples away and I so agree that decisions like that are very stressful. Hence why I am still stuck with hundreds of the things, haha.

I laughed at the idea of your chucking 3ml over yourself in one go. A 1ml vial I could almost understand, though I get half a dozen or even ten wearings out of even that small size normally! I hope it was an understated scent at least. ;) It does speed up rate of usage, that's for sure, which can only be a good thing!

I expect I have everything you ever gave me somewhere...;) I will see if it has gone off, but have been pleasantly surprised by the longevity of my samples in general, I must say.

I agree about the mystery person behind La Chasse aux Papillons. I also used to be able to tell American handwriting from other nationalities, though I am not so sure now.

LOL at posting post wine - I naturally substituted 'person' without even noticing the error!

Have been trying to use up or pass along samples, and also finish decants. --AnnieA

Good for you, and I shall make more of an effort to do so too in future.