"SCENT and all about it" by H Stanley Redgrove: an olfactory Oxfam find 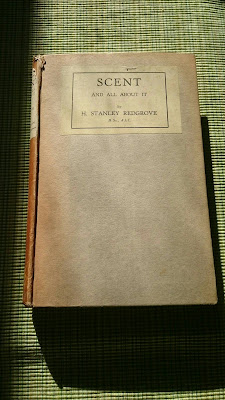 Are you one of those people who enjoys cruising the shelves of charity shops in between bursts of "proper shopping", in the knowledge that a bargain find of a £2 jug or a £3 pair of shoes will be a surefire way to give yourself a little lift? I am that charity shop cruising soldier, and even if nothing else turns up, there are invariably a few paperbacks that come home with me on any given sortie - you just need to poke around enough amongst the serried ranks of horror, historical romance, and chick lit. So imagine my delight when I was browsing in my local Oxfam shop and spied this hardback book from 1928(!) - on perfume of all unlikely topics. Bagged for the improbably precise sum of £1.79, and I turned a blind eye to its foxed cover and tatty spine. It is not far off a hundred years old, after all.

To be honest it was more of a technical read than I was after, but I enjoyed parts of it a lot, and loved the mere fact of handling such a venerable textbook on fragrance, with such a charmingly blunt title to boot: "and all about it". The book describes itself as "A Popular Account of the Science and Art of Perfumery", and I would question how popular it would be now, or was then even. The chapters were originally submitted to "The Hairdressers' Chronicle and Beauty Specialists' Trade Journal", which struck me as a spectacularly unspecialist periodical. I guess IFRA didn't come along till 1973 after all.

In the preface to the book the author, H Stanley Redgrove (we can but guess at the name behind the "H", but my money is on Harold or Henry), refers readers seeking more technical information on perfumery to the technical works of Askinson, Durvelle, Parry & Poucher, who do sound so very much of their time.

There's a great titbit about the need for a "compounder's license" costing £15 15s a year, in order to be allowed to prepare perfumes containing alcohol commercially. I wonder what the going rate is today.

The book proper kicks off with a section on the history of perfume: from Egyptian times up to the invention of Hungary Water, the first scent made with alcohol. Redgrove covers the advent of synthetics in perfumery, and soon gets into my favourite section: "Some Peculiarities of Odorous Bodies", where we learn about the appeal of indol when it is deployed at an optimal dilution, and fixatives such as civet, ambergris and musk. He notes how back then ambergris was already being replaced by sweet gum and oleo resins, while a successful substitute for natural musk remained elusive.

Later in the book there are some grim details about the exact MO by which these precious animal substances are harvested:

"...the cat is placed in a cage only just long enough to contain it, and after its legs are tied it is teased, as this increases secretion. Some of the civet is spontaneously ejected, the rest removed via a small spoon from pouches the glands excrete it into."

I will spare you the nitty-gritty on the extraction methods for the secretions of deer and badgers, but there were a couple more strange nuggets of info, namely the fact that most of the civet used in the UK at that time came from Abyssinia and was packed in ox-horns containing 1.5 - 2 lbs. I have to ask why? Couldn't they have used the early 20th century equivalent of a Tupperware? I also learnt that some nefarious middlemen tried to adulterate civet, I guess along similar lines to those who cut heroin with baking soda or talc. But I wasn't expecting the substance in question - banana pulp! Redgrove helpfully goes on to tell readers how to test for it. ;)

There is a little bit in the book on more abstract topics such as whether perfumery is art, the aesthetics of perfume, and its psychological effects - including a nice analogy with music where accords = chords - and he makes the excellent point that we are ill-equipped to describe smells with our current vocabulary and must resort to comparisons, as in: "this smells like x". However, most of the rest of the content is rather over my head. 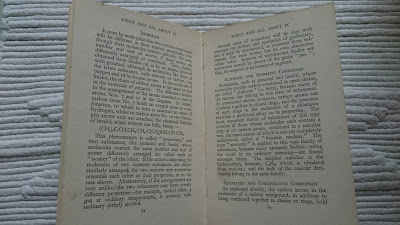 For example, there is a whole chapter dedicated to the different types of alcohol; I now know more than I feel I need to about pyridine, fusel oils and empyreumatic substances. Then as well as detailed explanations of that well-known quartet of techniques used to produce essential oils - expression, enfleurage, distillation and extraction - he wanders into the chemistry of carbon compounds, and before I knew it I was bogged down in isomerism and phenolic bodies / esters. Actually, esters are ringing a bit of a bell with me, ditto aliphatic compounds, from my various work projects in chemicals down the years - including one famously in aroma chemicals in fine fragrances years before I became interested in perfume - but I couldn't tell you what they are now, haha.

The book finishes with some actual perfume formulations from the period, including Jockey Club by Askinson (sic), and recipes for Eau de Cologne and Lavender Water. For anyone curious about the former, there are three pints of extract of jasmine in Jockey Club, two of rose, and one of tuberose, along with half a pint of tincture of civet! I reckon that might have smelt more like the stables at mucking out time than the stated odour of "sweet wild flowers wafted over Epsom Downs".

Now I have more to say about my own evolving relationship with civet, but that can wait for another time...

So I definitely had my £1.79's worth(!), and I believe the book may have some value, battered spine notwithstanding. I have sent it to Eliza though - it is the back up book I omitted to bring with me when I met her the other weekend...;)

What's the best book find you've had lately in a charity shop? Have you ever come across any on perfume?

hi Vanessa- interesting read! I have to admit I hardly ever go into used-bookstores these days but it must have been quite cool to find a book on perfumes. Oh, and it is actually "Herbert": google is, as ever, my friend, and here https://www.gutenberg.org/ebooks/author/579 I found this nugget of information...although it does not list the book you bought, I think it is safe to assume it is him ... I do hope that the book did not actually have pictures of the extraction of the musc? The description must have been gag-inducing enough... A few years ago I was at the Osmothèque and they handed round a tin with an actual musc pod, telling people it was best to not actually lean in and sniff... needless to say I did, and it wasn't so bad actually (At least I was not traumatised by the experience or I would have remembered)... it did look rather unsightly though!! cheers, Wendy

Thanks so much for doing that bit of detective work - it seems clear to me that Herbert is indeed our man. ;)

I nearly went on to write about musc pods, but forebore, as I felt the rather graphic civet information was probably enough already - how interesting though that you have seen one! I would love to visit the Osmothèque sometime.

Loved reading about your gem of a find, V. Interesting how some of it was antiquated but some discussions such as whether perfume is art, are still ongoing.

My mum got a call once from a woman who had bought an old annual in a charity shop with my sister's childish scrawl in it giving her name and phone number. The woman wanted to know what came of her.

Thanks, Catlady1649! I was delighted, I must say, as you don't come across such a thing every day.

Yes, it was a fascinating mix of old and "still current", as you say. I loved your story about the annual in the charity shop belonging to your sister. That is akin to putting a message in a bottle and having someone respond to it years later. ;)

I'm delighted by this blog and your love of old books. I don't know if this is appropriate, but Is it permitted to mention the name of my own blog? It's the tale of my struggle to create beautiful olfactory things and to run my own perfume company with its staff of one, me.

Thanks for dropping in, and by all means mention your blog and perfume company - I believe I have just found it: the Brooklyn Perfume Company...I was a one man band for most of my working life, and can relate to your struggle, albeit in a different field.