Harriet Worth goes to France: a thematic round up of (less stressful!) incidents and oddities - Part 1 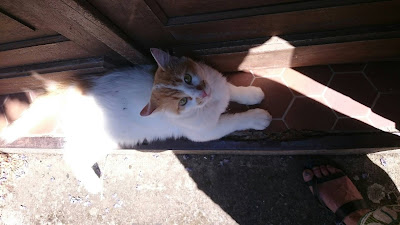 Hemming staking out my house
I have decided to adopt a thematic rather than a strictly chronological approach to the rest of my account of the French trip. The first two action-packed days certainly lent themselves to a linear account, but for this post (and a further one my material will run to!) I shall pick out the notable motifs of the holiday (I use the term "holiday" very loosely).
The cat with five names
Regular readers may remember my post from last August, featuring a new furry friend (at the end), an orange and white cat I named Hemming because of his strong look - he had something of the Viking about him. Back then, I understood that he had a home, but spent as little time there as possible due to the presence of dogs and/or children with which he didn't get on. A year on and Hemming is definitely living rough and on his wits - he looks more unkempt and his behaviour is pushier than before, when he was already what I can best describe as "aggressively affectionate". I mentioned in my last post how he sprayed on my sofa the one and only time I let him inside my house, another sign that he has become a bit feral.
The person staying at my friend L's house down the street had been feeding Hemming (whom he called Leo) outside, so on his departure shortly after I arrived I took the baton in this neighbourly feeding relay. Hemming would appear at my door miaowing piteously, before trotting ahead of me down the street to the windowsill where he knew his food bowl was kept. When I went home, I handed over the remaining dry food to the new owners of the house next door to me, who had already had "representations" from the cat, which they called Chirac. They told me that yet another family calls him Marmalade. I don't think Hemming - real name unknown - minds what he is called, just as long as there is at least one house in the street at all times that is "active" and staffed. 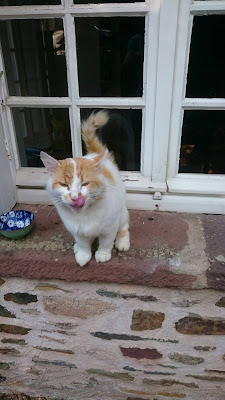 Failing to be in and be counted

There is always a lot of junk mail in my letter box at the house every time I go, typically of the local newspaper and shopping flyer variety. But on this trip there were several communications waiting for me - of increasing urgency - to do with a village census. It had taken place over a four week period back in January / February, a time of year when most residents would likely be around, but not second home owners. The next day I popped to the town hall to apologise in person for my non-compliance with the census summons, which had been compulsory. They told me not to worry, and pointed out that - this being August - I had well and truly missed it. "What a shame" I piped up brightly, "as I like filling in forms". Later I decided to take a look at the questions, the most interesting of which concerned the bathroom arrangements of my house. The options were:

"Neither bath tub, nor shower"

"Bathroom (with bath tub or shower)"

Now I have been known to liken my very basic and rustic house to a "living folk museum", but it does at least have a dedicated (if rudimentary) bathroom with a shower. I would be intrigued to learn what proportion of the census participants were in the first category, having a "lick and a promise" kind of wash in the sink? 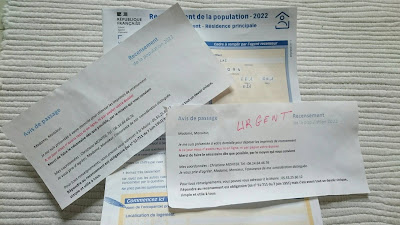 Getting trapped by more gates

After my scary adventure in the "zone restreinte" in Dieppe, I could hardly believe that during my stay I would manage to get trapped in by gates on two further occasions: once after visiting a bus depot to check their lost property stash for my missing beret (from last November, so I wasn't very hopeful), and once after visiting an old people's home. I had hoped to speak to the manager, whose grandmother was the last person to live year-round in my house in the early 70s, as opposed to using it just as a holiday home. In the first instance I drove through the open gate into the car park of the bus depot only to have it shut (and lock) behind me again. "No problem", I thought, "I will ask the staff to open it as I leave". Which I did, only they couldn't remember the code for that day, and spent a good few minutes trying various combinations of numbers it might have been. After many fruitless attempts, one man asked cheerily: "Would you like a leg up?" (known as a "short ladder" in French). It looked a fair old drop the other side, so I said I would be happy to wait till they figured out the code, which thankfully they did in the end. 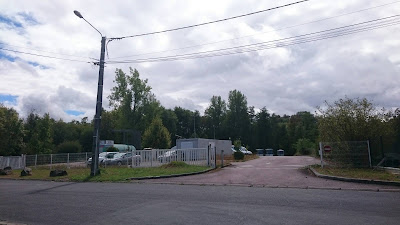 Looking back, the visit to the old people's home could have escalated into a more worrying scenario than merely being unable to find a way out. I should really have rung to say I was coming. As it was, I opened a side gate into the drive of the residential home - which also required a code, helpfully taped beside the lock, with an injunction not to tell anyone and to request a (presumably different) exit code after my visit. I went through the gate, and it too clanged shut and locked behind me. "No problem", I thought, "I will ask the staff for the other code as I leave." Once inside the home, with the reception area dark and unmanned, I realised that the staff may have been thin on the ground - it was a Sunday, after all. I tried the courtesy phone, but nobody answered. There was nothing for it but to wander through the communal areas of the building, looking for personnel. I passed several residents in wheelchairs, watching television with the volume turned up loud, but saw no one even vaguely in charge. It then occurred to me that even if I did meet someone, I had walked so far into the building by now that they might take me for an intruder and I might actually get into trouble. The incident in Dieppe had clearly scarred me, and I had sudden visions of nearly being arrested again. So I suddenly changed tack and decided to beat a hasty retreat, forgetting for a moment that I had failed to obtain the all-important exit code. I legged it back to the perimeter fence, but this time tried another side gate further round, and to my great relief and surprise it was unlocked, and I made my escape. I would love to talk to the relative of the former owner - who may herself have lived there as a child - but I will be sure to do so by arrangement next time. 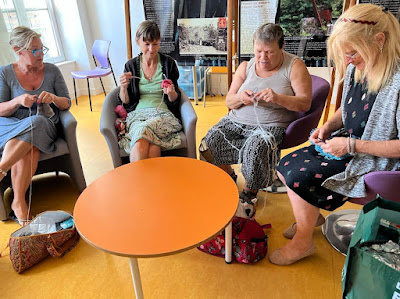 Obstructing an exhibition with knitting

For some time now I had been aware that my village had its version of a "Knit and Natter" club based at the library, but on this trip I finally made it to a session, taking a prototype cotton flannel with me, along with my Belgian neighbour C, who was also curious to check out the group. Apart from us there were four other participants: three French and one Dutch. Of the French knitters, one was an eleven year old boy, who had come with his grandmother. Fair play to him for not thinking it a cissy pursuit, and having the patience to sit with a bunch of grown ups for two hours without appearing remotely restless. Amusingly, his grandmother turned out to have been born in the house where the other French lady lived. Wheels within wheels...

Anyway, we quickly bonded, as knitters do, over questions such as: "How old were you when you started?", "What was the first thing you made?", and "How big is your stash?", and I also learnt the French for an easy project you can watch TV to, known in English as "mindless knitting", and in French as "zéro cerveau" ("zero brain", which sadly lacks the rhyme of the original). The lady who lived in the other lady's house mentioned that she dares to knit fingerless gloves during Zoom meetings at work, her hands carefully positioned out of sight of the webcam. These would be very much an example of a "zéro cerveau" project, which she dubbed "meeting mittens".

The obstructing bit alluded to above came about because we were sitting in a circle in the middle of an exhibition on the history of roofing and roof tiles in the area. Several visitors came in during the afternoon and valiantly tried to squeeze behind our chairs to read the display boards. It only took a few of us to obscure several hundred years' worth of this ancient craft on our side of the room, but happily nobody complained.

NB Perfume will be back in Part 2, in a cameo role at least, after which "normal" posts will resume...

Nice instalment of your French trip, V. Particularly enjoyed your experience at the knitting group and the surreptitious 'meeting mittens'!
Tara

Yes, the surreptitious "meeting mittens" were a highlight of the afternoon. ;) The Dutch lady had also made a blueberry cake, which we scoffed with herbal tea after a couple of hours of knitting and nattering. The club was actually called "Cafe Tricot" ("Knitting Cafe") which is a good sensible name for it.

I'm usually acutely aware of any doors/gates that can close & lock behind me. I blame King Solomon's Mines book that I read in an impressionable age ;)

I've heard before about communal cats. But the closest I personally got to that experience was a cat at one of the rental properties in Kawaii: he lived with his owners in the next building, but would come to visit renters to get some attention and food offerings from them. His sibling who we saw only outside was much more fit :)

I will be more gate-aware in future, that's for sure. And try to pre-plan my exit strategy better...;)

I enjoyed the story of your holiday cat - sounds quite similar to this one, or this one when he did live with his owners. I wonder if he had multiple names too!

Vanessa,
You are one of a kind.
That cat looks like it could eat you.
Your nursing home story could have had a VERY different ending.
One day I hope to see your beautiful French home.
Portia xx

Thank you for that great summary!