On Saturday I did that thing I am trying so hard not to do - I accosted a stranger in a shop again. Two strangers in fact: a lady of a certain age, and her mother, who was of an even certainer age. It is not very long since I approached that other lady in T K Maxx and asked if she was wearing Coco Chanel, prompting her to scuttle round to the fixture for shoes several sizes too large for her. So following that incident, I really had made a conscious effort to rein in my impulse to strike up perfume-related conversations with innocent members of the shopping public. 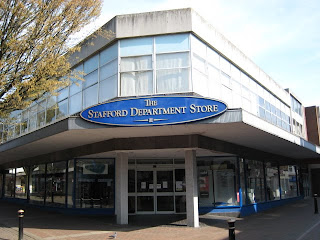 Until Saturday that is, when I was hovering aimlessly by the Hermès display in our small and rather time warpy department store. It is actually part of the Midlands Coop - the Cooperative Movement being better known historically for its bulk buying of sacks of oatmeal, and more recently for its loyalty-inducing "divvy" stamps. But though it may appear a bit homely and tired-looking, it is the only department store we've got. Plus I have days like that, so who am I to talk? : - )

So there I was hovering by the Hermès table, together with these two ladies, who were clearly considering sampling one or two bottles from this unknown line. I am afraid I couldn't help myself:

"I can give you a guided tour if you'd like?"

"Ah, that one is very fresh, with a note of green mangoes, and was inspired by the perfumer's boat trip down the Nile." 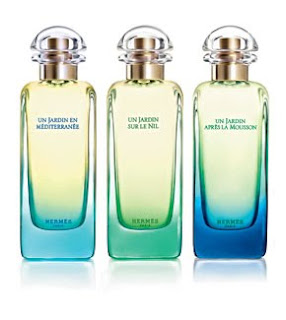 The lady quickly sniffed the nozzle and hastily replaced it, before picking up Un Jardin en Méditerranée.

"Okay, that one is a bit in the same vein but different - more vegetabley, I guess you'd say."

It was replaced unsniffed, and before I could say anything, the lady had sprayed the back of her mother's hand with 24 Faubourg. 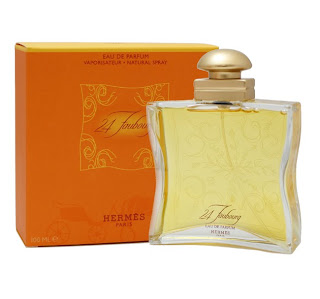 "Oh, now that is a whole other ballgame - a classic powerhouse of a scent." I volunteered nervously.

Both women sniffed it and wrinkled their noses. "Oh no, too sweet!", exclaimed the daughter with a visible 'moue'. Then suddenly, on a whim, she grabbed a bottle of Eau des Merveilles and sprayed her own hand liberally with it.

"Eugh!" They both exclaimed.

"Er, yes, that one is quite unusual - it is sort of salty and orangey and woody - you either like it or you hate it, as a rule. The name means 'Marvellous Water' or 'Water of Wonders' or something along those lines, you know."

Not only did they hate it, but the Eau des Merveilles experience cured them of any further curiosity about the Hermès range. Which was a shame, as I never got to point out the Calèches, which might have been more to their taste - regular Calèche at least - even if the Jardin range was too modern and fresh, and EdM downright peculiar (possibly on account of its "ambergris accord" - I must say I find the use of inverted commas in the list of notes strangely disconcerting).

As they backed away, the daughter quipped darkly: "Well yes, I suppose it does rather make you wonder..."
Posted by Vanessa at 20:13

(giggle) a lady of a certain age with a mother of an even certainer age. Love that description.
Hmm, the ladies of the certainest age (when added together) didn't really seem to appreciate your expertise... To quote the younger of the certain(ly) aged women: it does rather make you wonder... At least they could have given you a polite smile and exchanged a few words. Ah well, they do not even know what they missed out on.:P

Hilarious. I must say, I'd love your guided tour. These ladies of certain ages don't know what they're missing. Ah well. I have the same compulsion, although mine manifests itself at dinner parties. I keep a special box called 'representative samples' and anytime anyone expresses even the slightest interest in my hobby, out comes the box, and everyone is sniffing their arms ruefully.

La Bonne Vivante, Thanks for the vote of confidence in my tour guide skills. I love the thought of your taking along a special box with "representative samples" to dinner parties - that is hardcore!

I have taken along small cosmetic bags of samples to meetings with fellow perfumistas - like Potiron above - but to gatherings of ordinary members of the public? That is proper proselytising, and all credit to you!

I absolutely worship EDM- it's so sexy in a not trying sort of way- love it on men actually- it's a bit more 'turned up' than Terre, which is basically the same idea as far as I can tell but 'turned down'

I know EDM is well regarded, with quite a following in perfumista circles, but for me sadly - as for these ladies - it will forever remain plain weird.

I love your photo, it reminds me of the Co-op in Sale Cheshire, which was the best place ever for high qulity and style-ful hosiery. Heaven knows how.

I like EdM, but ended up giving my bottle away after a while. I think I would prefer it without the orange - I loved the salty driftwoody parts to it.

I really enjoyed this one - I'm starting to put Hermes on the list of a house I have a lot of respect for (bad english, I know!)

It's all pretty consistent stuff, qualitywise, I agree.

Re your bad English - these are lapses up with which I will not put! - as Churchill famously didn't quite say.

I did this with a guy in Boots recently. Big bloke, late fifties & the SA was spraying lots of teen-boy melony aquatics on him. I couldn't stand to watch any longer and asked him what he normally wore.
'Aramis,' he said.
'Ah well,' I said, 'Aramis is a monster - very strong. Have you tried Kouros?'
'No. Never heard of it,' he said.
The SA dug out a bottle & gingerly applied a bit of it to his forearm.
'Ooh,' he said, 'yeah, I like that!'.
'You should be working here!' said the SA.
I was proper chuffed.

That is indeed a most gratifying tale!

A perfumista friend of mine has just quit his job as fragrance SA at an out of town branch of Boots in Bristol, so there may be a job going there! Bit of a commute, granted...