Back From The Bonkers Fly Drive Trip – Part 3: The Scented Bit (Cleveland) 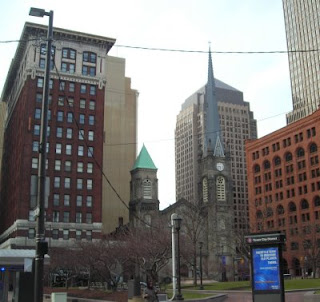 I haven't conducted a poll on this, but I am willing to bet that if you asked around those of my friends who have been to the States, to see where they visited on their first trip, they would be pretty evenly split between New York and Florida (as in Disneyworld, mostly). Okay, so San Francisco or Vegas might have got a couple of mentions too, but somehow I don't think Cleveland would have come out in the top three destinations.

Yet back in 1984, Cleveland was my first experience of the US - I spent two weeks there on an educational exchange programme at Cleveland State University. Remarkably, I still have my diary from that year, and can be quite specific about the details of my stay, including the fact that I attended a lecture on Liquid Control Distribution (sic) and one on Product Liability ("$100,000 for tuna fish and wood chips!" reads my cryptic note). We slept three to a room in a fancy high rise hotel with a pool simultaneously occupied - to our great excitement - by the band Simple Minds. (That's the hotel, not the pool in particular.) We ate nightly at the Rascal House pizza restaurant and made excursions to Niagara Falls and the Amish country in somebody called Ken's "huge green Thunderbird", which I am going to assume was a car. On the last night, I attended a humdinger of a party at someone called Don's house, which adjourned at 6am to none other than my very first branch of Denny's! Oh yes, and would you believe there is even an early reference to swiping "free pens".... 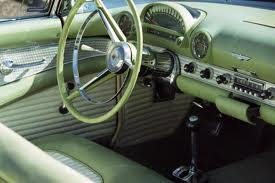 So as you may imagine I have fond memories of this city, and was pleased to have the chance to go back - not for the first time, even, for I was last there in 2006 - but it was my first visit to Cleveland with my fumehead head on! First up was Beth of Perfumesmellinthings at the end of Week One. I had a meeting downtown first thing, then, following a last minute exchange of messages on Facebook, I jumped into the car and hurtled off to the upscale neighbourhood where we had arranged to meet at a popular cafe. Unbeknownst to me, what I took to be the name of the street the cafe was in was in fact the name of a shopping mall - a really easy landmark to find if I had not been fixated on finding the street (or for that matter, the square!) of that name.

By now I was running about 20 minutes late, and realising that my GPS had given up on this particular address - as on so many others in Ohio indeed, for the entire Dayton area AND Cleveland airport are completely off its radar, even when you are actually there - I drove aimlessly around the neighbourhood for a while before spotting a public library and swerving into its entrance. 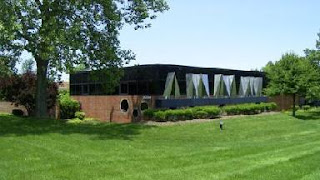 I sprinted inside, pausing only briefly to swear profusely as I extricated the heel of my shoe from the muddy verge in which it had become momentarily mired, and breathlessly asked the young man on the returns desk if he could point me in the direction of the cafe I was looking for. As luck would have it, he used to work at Borders the bookshop in this very mall, and proceeded...very, very slowly...to jot down detailed driving instructions on a Post-it note with overly painstaking care.

Five minutes later I erupted into the cafe, where Beth was already installed at a table by the window, netbook in front of her, red tortoiseshell glasses perched at a jaunty angle on her nose, and a serene grin on her face. We had already clocked each other's Facebook photos, so there was no need to facilitate the mutual recognition process using perfume accessories. 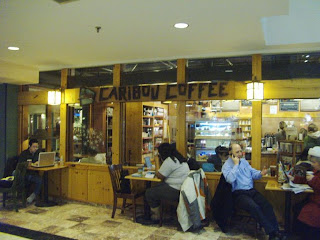 As soon as I arrived, Beth leapt up to buy me a very tall - grande? super grande? grandissimo? - beaker of Earl Grey tea, which she figured I could probably use after my fraught journey. My reputation as a tea fiend precedes me... Now, given that I was already about half an hour late, I would have quite understood if Beth had had to make her excuses minutes after my arrival, for I knew in advance that she had an episodically busy day ahead - or what it pleases Mr Bonkers to call a "sodding epic" day.

Yet somehow we ended up sitting there for two hours, for which ScentScelf is partly responsible. For it was she who formally introduced us via Facebook, thinking that as Beth used to own a business in the same industry as I was working in on my project, we might have a fair bit in common, and so it proved. The first 45 minutes or so was spent shooting the breeze about retail trends, with Beth acting as a useful sounding board for a few of my tentative conclusions from the research. 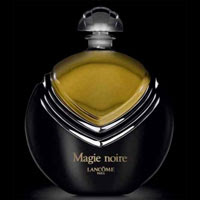 Then somehow the conversation managed to segue seamlessly into perfume, and before you could say "IFRA regulations" we were both lamenting the reformulation of Magie Noire, and the loss of our mothers, sharing our sneaking admiration for Tilda Swinton's unconventional domestic arrangements, and generally chewing the cud about a plethora of random topics. I was impressed by Beth's feistiness and creative energy, which she channels into multiple blogging projects I have not yet a chance to properly investigate. Eventually it was time for us both to head off to our next port of call - in my case this was none other than Bloody Fridaville(!), where I had booked myself into the town's hotel for two nights.

Weirdly, it appears that I visited the larger mall next door to the one where Beth and I met - which is more of a bijou mall-ette really - during my Cleveland trip in 1984. I described it then as "very swish", and would still! Later that day, I apparently went to a party at Julie's, whoever she is, taking along a bottle of "good red wine", though I said so myself. There we had "lovely chilli" and I "got pissed", and we ended up in a bar called Flamingo, of which I can find no cyber trace 27 years on.

Hmmm....the reference to red wine and intoxication seems strangely prophetic, as will be related in Part 4....

*Claps* I so love Cleveland (even though I grew up in and around the town and have never lived any where else but the state of Ohio) and so glad you do too! Hoping to meet Beth one of these days!!

*and I still bet a zillion bucks that we met at some point at the Rascal House, or walking through CSU - do you remember that many of the 'weirdos' hung out under that big stairway in that main atrium? Yep I was one of them; and sadly that building is no longer there (where they had the cafeteria you had mentioned)*

I spent 3 weeks in Ohio when I was 16, near Columbus. Not fond memories or good times, I'm afraid, lots of blatant racism and bikers.

I almost fell off my chair when I read that you stayed at the same hotel as Simple Minds!!! Did you meet them/stalk them? Loooooove them :-)

Sounds like you had a nice time meeting Beth. She seems very down-to-earth.

I do have a soft spot for Cleveland, that's for sure. I must be honest and say I can't visualise the staircase or the atrium, even though I must have passed through there to get to the cafeteria that I do remember. It was the first time I encountered alfalfa type sprouts or bacon bits in a salad buffet, which may be why that particular memory sticks.

And it seems most likely that our paths would have crossed in the Rascal House if you even went there once a week. That seems to be pretty much where we ate (apart from the lovely chilli at Julie's house, obviously!) : - )

Am sorry about your unhappy trip to Columbus: "blatant racism and bikers" doesn't sound like a winning combination. I was also in Dublin on this trip, just outside Columbus, rather aptly on St Patricks Day.

I saw Simple Minds from a distance in the hotel foyer, but didn't know who they were at the time, even though I quite liked their music. So strictly speaking, any excitement I felt was retrospective! To answer your question, stalking couldn't have been further from my (rather dozy) mind. : - )

Loved the snippets from your '84 diary, how fun to be able to re-trace your first trip. Sounds like your meeting with Beth was another success.

Weirdly, I am going to stay in Jim Kerr's hotel in Sicily later this year.

That is an excellent coincidence about Jim Kerr - I didn't know he had a hotel, but I have just googled it and it looks amazing! Have a fantastic time when you go... : - )

I loved meeting you Vanessa! What a great time that was! I look forward to someday having a fabulous pot of tea with you in London and going sniffing at Harrods! ( maybe even as soon as this summer!)

Wow! Whow would have thought that Cleveland...was cool?! ;)

It sounds like you had a great time, V - and I'm glad to know I'm not the only one who bitterly laments the 'death' of Magie Noir! :)

The feeling is mutual - we packed a lot into two hours, I thought! Would love a rematch in Harrods, Fortnum & Mason, Liberty's, or any other fine perfume emporium of your choice that has a cafe (which is most of them). The tea is on me this time - do keep me posted about your travel plans!

So glad to find a fellow mourner of vintage Magie. Given a bit of time, we may gather enough members to form a viable pressure group!

You're sticking up for Cleveland there I see...

I'd say that it has a gritty urban edge to it, not unlike Leeds or Liverpool over here. As does Pittsburgh and Cincinnati, come to think of it - or Toledo, for that matter. All fine cities and all of them cool in their own way...

Yep, all "Rust Belt" cities (well not Cincinnati so much, but the others, defininately!)