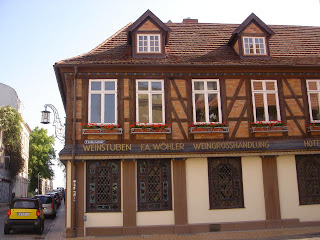 Readers of my account of my Mid-West trip back in March may remember that I don’t care for fancy hotels. I don’t like the fact that the better the class of hotel, the more likely they are to charge for things I consider a basic human right, like Internet access in the room or a bottle of water for when you get a raging thirst on in the night, thanks to the hotel's deliberate ploy of cranking up the central heating too high or tempting you with (chargeable) peanuts in the minibar. Then there is the suffocating attention to detail, like the way they fold the toilet paper into a gratuitous point, or place a hygiene strip round the toilet seat.

So when I travel in Europe, I like to winkle out interesting mid-range places to stay, and regularly consult my assortment of accommodation guides of the “Hotels Of Charm And Character” or “The Most Attractive Guesthouses Just Off The Motorway” variety. And then sometimes I have to find somewhere on spec, usually after a long journey, when I start scouting for a place to stay as soon as I feel myself flagging at the wheel.

If ever there was a place to let your hair down and indulge your inner Rapunzel, it was the romantic circular tower room of a medieval castle in Germany to which I was unexpectedly upgraded. I had booked a budget single in the annexe for half the price! In hindsight, they may have taken a snap decision to give me this room as one of the younger and more able-bodied guests staying at the time. As such, I must have looked well up to the task of negotiating the narrow stone spiral staircase that led to the room, and would be deemed unlikely to complain about the lack of a lift, or to sue them for a nasty bump on a low slung beam. 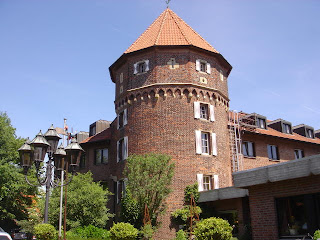 Speaking of the lack of lifts in hotels, that is in fact one of the other things Holland is famous for, apart from being a car park. This means quite a schlepp with your luggage if your room happens to be in the eaves, as singles often are. And it is not just the number of steps, but their incredibly steep angle that puts Dutch accommodation right at the top of the league table of vertiginous accommodation. Apart from tree houses and bivouacs on Mount Everest, perhaps. My attic room in Nijmegen was so lofty in fact that Internet access (mercifully free of charge!) could only be found by perching precariously - and specifically - on the last three steps of the precipitous staircase. 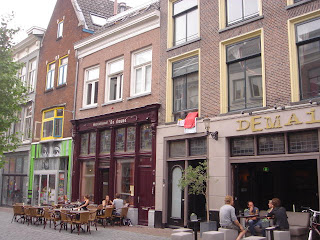 For my overnight in Poland I deliberately picked the same hotel I stayed in on my last visit to the area in 2007. It had the advantage of being bang next door to the chipboard manufacturer I was visiting the next day, as well as showcasing its products in surprisingly comprehensive ways. I learnt on this visit that the hotel is also something of a local nightspot. My restaurant suddenly morphed into a disco, with 60 women of my own age bopping on the dance floor with remarkable abandon for 9pm on a Monday night, and all before I could finish my pork medaillons! 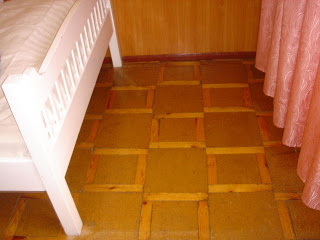 The other notable upgrade on this trip was in Schwerin, in a historic half-timbered coaching inn famous for its wine cellar. Once again I had paid for a basic single (somewhat more than in the castle, admittedly), and this time I was upgraded to an enormous suite that occupied the entire roofspace of one wing. It was 39 paces end to end, which is a lot, even if like me you take relatively mincing steps. As well as a bathroom and twin bedroom, I had a dressing area, a walk in closet and a living room furnished with a three piece suite, wing arm chair and foot stool, writing desk and office chair, and a dining table set for two. I spent a lot of time in this suite as you can imagine, returning to it at intervals through the weekend to take naps and generally luxuriate on every last item of upholstered furniture. The hotel was disappointed in me as a guest, however, for I failed to take the 12 euro breakfast on both mornings, never mind eat in their (doubtlessly pricey) restaurant. 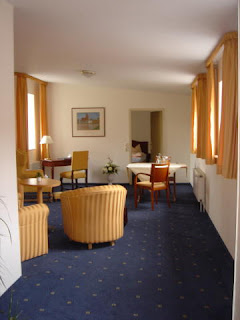 The accommodation that amuses me the most looking back is the room above a pub I stayed in in Bergen-op-Zoom. My landlady was a dead ringer for Pat Butcher out of EastEnders, and the bar was chaotically stuffed full of knickknacks and random bits of Victoriana, or whatever the Dutch equivalent might be - Wilhleminana?? My room overlooked the fire escape and was furnished with a squashy but ripped black leather armchair. There was a bit of a kitchenette, with a sink and fridge and microwave, above which was affixed a notice, prohibiting deep frying in four languages. How this might have been accomplished in a microwave with no utensils was unclear. 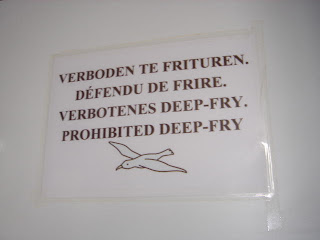 Oh yes, I haven’t mentioned the Gummi bears yet, a German confectionery line ritualistically laid on guests’ pillows in hotels of pretty much any calibre.

As Wikipedia explains: "A Gummi bear is a small, rubbery-textured confectionery, similar to a jelly baby in English-speaking countries. The candy is roughly 2 centimetres (0.79 in) long and shaped in the form of a bear."

I got through many of these small packets on my trips – wherever I had a twin room I would obviously eat both – but I didn’t realise they came in so many varieties:

Yes, never mind the rooms, next time I want a Gummi bear upgrade to a more exotic creature! 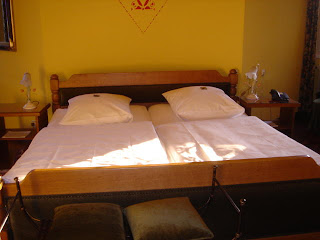 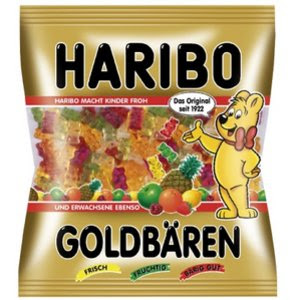 Photo of Gummi bears from erdbeerlounge.de, all other photos my own
Posted by Vanessa at 12:04

I hope you ate something other than gummi bears on your whole trip (though I do love me my gummi bears!)

To me, the finding of interesting places to stay and being surprised (happily) by a few would be one of the highlights of my travel! Though I'm sure that after a hard day's work one just needs a place to relax and sleep well.

Awesome upgrades, V! I would have spent a lot of time in that suite too.
I so enjoy reading your trip posts, I hope all those Duchess of Cambridge induced readers are still coming to read your funny travelogue.

Hilariously that is a picture of a turkish pack of Haribo Gummibears. :)

A jelly spider on your pillow is the stuff of nightmares IMO.

Well, of course I had the fateful chipsy banonowe that did for my tooth, but not a whole lot else. I think there's another post's worth or two left in the trip, and food - such as it was - may well be featured!

Thanks so much for pointing out the Turkish packet - I did puzzle long and hard over that and have now replaced it with what I trust is a genuine Teutonic one. : - ) There are at least a lot of Turks in Germany, possibly also vendors of Gummi bears!

I get the feeling that the surge of interest in my White Gardenia Petal posts was just that - a surge - and I would be surprised if more than a handful of such readers stuck around after satisfying their curiosity about the Duchess's scent!

No kidding about the jelly spider...! Even a yellow or green one would be too terrifying to contemplate. As would a Smurf, come to think of it (also in any colour).

Stil on the subject of Gummi bear imagery, you would be amazed at how hard it is to find a picture of one of those portion pack sizes you get in hotels. Unlike the one above, the mini-packs only contain about 8 sweets, just in case anyone thought me greedy for consuming two packs in a twin room. That would be one hell of a sugar high too!

And bless you, Bonks, for using the phrase "mincing steps" in a new venue, as it were. I love the concept, but had grown very tired of them being continually applied to a certain kind of regimentarian who was probably in need of something being removed. And 39 of them, you say? Very Hitchockian, it occurs to me as I comment, even if not initially intended. Oh, wait; you said paces; it was mincing steps. My digressive bad.

I enjoyed visiting your upgrades with you; thanks for bringing us along. As for gummi bears, we have those Haribo packages in the aisles that present what passes for "exotic imports" in a grocery store. My brain, unfortunately, sees "horosho," by which I start to think a Russian bear (THE Russian Bear?) is saying it is good, by which I don't quite get if it means it itself or the consumable bear product inside. Meanwhile, my synapses fire to other odd linguistic exotica, such as "Ohayo," which in addition to wishing one a good morning should one find oneself speaking Japanese, is also a pretty darn good movie.

Ha! I circulated back to a theme, sort of, no? The cinema.

Which begins with "c," and reminds me I have a question about that "chippy" word. But I'll come back to that some other time.

I noticed you had the Gummi bears over there, and was at least careful not to feature an American packet, haha!

Ah, "chippy"...simultaneously short for fish and chip shop and having a chip on one's shoulder! : - )

Hahaha, you are quite right I think the number of turkish gummi bear vendors in Germany is disproportionately high, so the image was quite fitting. I don't think that even consuming two full sized packages of Haribo's would do you any harm, you can use it! Although the tooth situation might dictate a gummi bear abstinence for a while, my husband would certainly and convincingly try to talk you out of gummi bear abuse. :)

My hunch was right then! I do agree that the tooth situation might well dictate a Gummi bear abstinence for a while, and am happy to defer to Mr O's dental wisdom. : - ) My consumption of banana chips since the incident has been very modest, I can tell you.

You know how humid it is in the U.K today Bonks . I'll be back when my glasses stop steaming up !!!

Funny that - I just emailed my agency and said that I wasn't getting much work done today as my home office is like a Turkish bath! See you when it is cooler. : - )