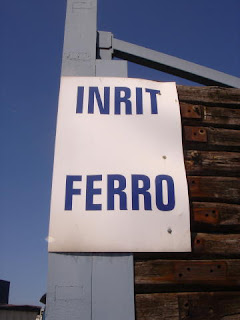 When I do a serious amount of driving, far from becoming immune to my surroundings, I seem to develop a heightened awareness of the things around me, possibly because my world has shrunk to these three lanes and a bit of hard shoulder. Well, on the motorways anyway, which accounts for the bulk of my mileage. So here is a miscellany of things I noticed on my recent trip, ranging from the slightly out of the ordinary to the downright peculiar. They fell broadly into two camps: roadside and linguistic.

Well, nothing can top the Trabant on a pole, but there were a number of other curiosities that caught my attention...

Belgium, as I hope I have satisfactorily established in Part 1, is a car park, and an essential characteristic of a paralytically congested road network is the contraflow - or "Baustelle" in German. Here the traffic gets funnelled down a 10 km chicane (or that's how long they always feel like) with narrow lanes, adverse cambers, serried ranks of cones and the obligatory concrete mini-wall on one side. Any normal motorist who sees the 60 kmph speed limit ahead will leave it to the absolute last minute to reduce their speed from 125 kmph, so to encourage drivers to enter the contraflow at a more sedate speed, the Belgian highways authority came up with the ingenious idea of the "contraflow scarecrow", a rag-clad dummy on a pole (all the best things are on poles), positioned at the entrance to the roadworks. 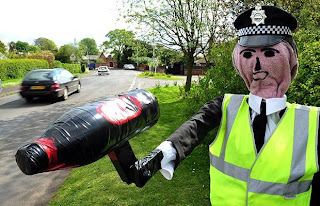 As distinct from his agricultural counterpart, the "crop scarecrow", the contraflow scarecrow has a single articulated arm, which it waves slowly at oncoming traffic. I can't begin to tell you how cute this flappy-armed dummy is, and dearly wanted to take a photograph, but that would have been a dangerous stunt; the irony of my potentially crashing into the central reservation whilst trying to photograph an anthropomorphic traffic calming measure was not lost on me. So I scoured Google images for a picture to no avail, though I did find one of a speed cop scarecrow along similar lines. He is holdiing what looks like a papier mâché speed camera encased in polythene, but I bet he can't flap his arm.

I thought I had seen every possible traffic warning sign in my time, from children, to elderly people on sticks, to tanks, and ducks crossing the road, as well as signs depicting risks from falling rubble, ice, and drawbridges opening when you least expect them. That was before I drove through a particular stretch of East Germany noted for its flatness and dead straight roads densely overhung by trees. 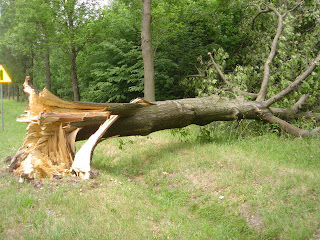 It was here that I spotted signs depicting high-sided trucks getting caught up in the foliage of the tree tops, and others showing passenger cars colliding with tree trunks lower down. The third main sign on these roads was the classic one showing leaping deer. It occurred to me that to complete the set, motorists round those parts could really do with a sign warning drivers of the risks of deer leaping smack into trees.

Then a few days later I came across this fallen tree by the roadside in Poland. I don't know for certain that this was specifically down to deer damage, but given the lack of warning signs to this effect it seems the most likely theory.

I noticed two things about roofs on this trip in every country I visited: the growing popularity of roof mounted solar panels, and a fashion for glossy, wet look clay roof tiles. I think I have found a bit on the process in question on the website of a leading Austrian tile manufacturer, Wieneberger: the secret seems to be all in the "engobing", with the phrase "special shiny look" the dead giveaway: 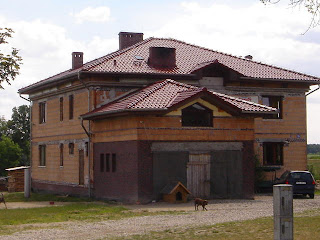 "After the drying process the clay roof tile, except it remains natural red, is either engobed or glazed. Engobed clay roofing tiles have matt, matt-glossy or glossy surfaces. Engobes are applied as clay-containing slips by dipping, pouring over, centrifugal casting or spraying on the still unfired clay tile. Glazed tiles are covered with a very hard continuous glass layer that closed all pores and makes the tile extremely water-resistant. at the same time this glass layer gives the tile its special shiny look."

I must say I didn't care for them. Even though I do own a pair of patent shoes, I was brought up to consider shiny things generally a bit of a no-no.

Pigs on the go

It is not uncommon to see lorries transporting live animals on the motorway, but what struck me as a bit unusual on this trip was the fact that they were all pigs, and I would literally see three or four lorries packed with pigs every day. Maybe they were on their way to abattoirs (or "Slagteri", that would be) in Denmark - I wasn't paying sufficient attention at the time to the route, so intrigued was I by the recurrence of the species. Now I went through a bit of an insomniac phase for a few days of the second week, and instead of trying to summon up the sandman by counting sheep, I instinctively found myself counting pigs. Still didn't get an oink of sleep, but it wasn't for want of trying. 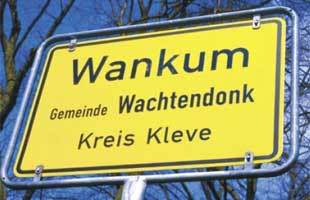 2) Most pompous slogan on a lorry

"Fruit solutions"?? To what problem is fruit the solution? Well, arguably scurvy, I guess, but I am not sure that is what Stute (the company in question) is getting at here. Now hold on, it may not be pompous at all, it may be a pun on "solution" meaning a dissolved something or other - fruit concentrate in water, perhaps? Yes, I am going to assume it is a sophisticated play on words, mischievously cocking a snook at a particularly insidious instance of business jargon. 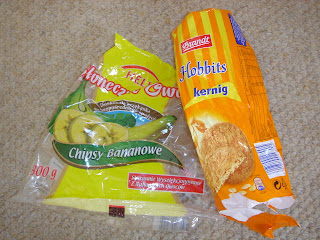 4) Lost in translation (on a Polish menu)

5) New words and phrases I have learnt

(Dutch for "trust the cucumber")

(Flemish for rice pudding AND moss stitch in knitting)

(Afrikaans for "shopping mall" and "balls up")

Just one more instalment to come - with a mishap round up... 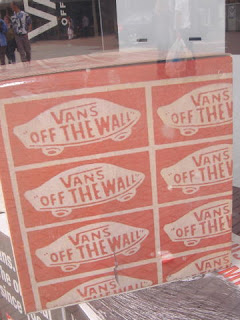 Photo of speed cop scarecrow from aliraqui.org, photo of Wankum from rationalskepticism.org (because I was driving at the time), other photos my own
Posted by Vanessa at 19:53

Why do the Dutch trust cucumbers? :)

Ooooh, you should see Croatian translations into English. :) Just check any menu in any restaurant/bar.
I can totally see where that chicken chest came from. It would be equally possible to find such a phrase here as well. :)
What I don't understand is why are people so cheap not to give the menus to people who know what they are doing?

Because they didn't believe it was the cause of the current EHEC-bacteria epidemic in Germany, though cucumber, tomatoes, bean sprouts and leaf salad were - and possibly still are! - all under suspicion just across the border.

Slovenian favourite; 'Gipsy Spit' (I think it has same menu where the Italian promised Evil Crumble - 'male' rather than 'mela').

I've heard that deer, throwing themselves in front of cars is the #1 cause of death (to humans-don't know about the deer!).

Do Europeans put bumper stickers on their cars? I love reading them. My current favorite is one I saw on a roadtrip this last week-end,

'Get A Taste Of Religion
Lick A Witch'

It is one of the highlights of any holiday reading the menu and having a chuckle. I think my all-time favourite mistranslation was in France and concerned a dish of monkfish, served with a sauce "made by the specific American".

I hope to be going to Slovenia soon and will definitely keep my eye out for the Evil Crumble and Gipsy Spit, which - in case any fans of the Byredo range are worried - is *not* the main consituent of Gypsy Water.

Having been shaken up when a hare smacked into my headlight at 60 mph, I can imagine that a collision with a deer would be both scary and extremely dangerous. After my collision with the hare, I was up till the small hours poring over the small print of my hire car agreement, to see if I should have reported the incident to the German police. Turns out it was anything from a sheep upwards.

Bumper stickers are fun, I agree, and the one your mention is pretty out there!

I think that Wankum Wachtendonk should be seriously considered as a stage name for anyone who hopes to take the place of Engelbert Humperdinck when he chooses to retire.

It does have that sort of ring to it, I agree!