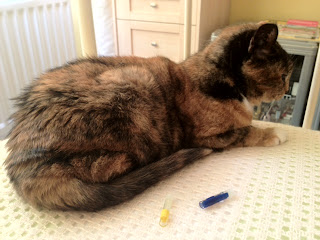 As followers of Undina's Looking Glass will know, I was one of several perfume bloggers who were invited to participate in a blind sniffing project, testing two unknown perfume samples side by side and noting down our thoughts.

Being of a thorough and scientific mindset, Undina had taken the precaution of wrapping the vials thoroughly in yellow and blue electrical tape, in case the colour of the juice might give us a clue. Speaking for myself that would be most unlikely, unless one of them had been Sarrasins, say. : - )

The other bloggers who took part were Natalie of anotherperfumeblog and Suzanne of Eiderdown Press. We each sniffed and resniffed the two vials on a number of occasions, and tried to figure out whether they were similar (very!), and what notes we might be smelling. (I was predictably rubbish at this, and tended to confine myself to descriptors of the scents' general character - "powdery", "retro" etc - while the other two detected a number of specific floral notes). We also had a go at guessing what perfumes they were exactly, again with mixed results, "mixed" being the operative word as you will see...!

Right before Undina published her post, she put us out of our misery and revealed the actual identity of each fragrance. One was new to me but the other I am pretty sure I have tried on a blotter once some years back. However, even if I had smelt both the scents recently, I am not at all sure that I could have placed them - it is extraordinarily tricky to recognise a perfume when it is divorced from all its usual trappings of brand and packaging. Suffice to say that I had a lot of fun trying, and would like to thank Undina for inviting me to join in this project.

For the full story, hop over to Undina's blog if you haven't already done so. There are also unmissable photos of Rusty, Undina's supremely photogenic cat, in fine vial-batting fettle!


Photo is of Charlie Bonkers not interacting with the yellow and blue vials. The eagle-eyed reader may detect a bit of yellow tape missing from the yellow one, but I would like to reassure people that it was removed AFTER the trial was over, out of idle curiosity as to the actual colour of the juice!

Vanessa, I'm always thrilled when I get to participate in a project with women I admire. I thought you did an amazing job, especially considering those two fragrances aren't any that you own and aren't even your kind of frags. I think Natalie and I had an advantage in that I'm familiar with Gold (I own a bottle, though don't wear it all that often between sampling and everything else in my collection) and she was familiar with Climat, having been recently introduced to it by Undina. But when someone hands you two blind vials, and they could be any of the thousands of fragrances out there, you do feel like you're smelling something from a very disconnected state. The first vial I cracked open was the Climat, and I was so certain it was Amouage Gold, that when I smelled the yellow vial (the real Gold) I was absolutely confounded. For a good many hours, I wondered if she had sent me Amouage Dia (which is the daytime companion to Gold) or some obscure vintage Chanel. Took me a day and many, many sniffings to figure it out, and then I got the scents reversed anyway, which was embarrassing. But it was a great test for the nose and made me realize I should do this kind of exercise more often. :)

Very interesting project, and I think you did well!

I adore the photo of Charlie Bonkers staunchly ignoring the vials and continuing to do her thing and not your bidding. That is why I love cats so much... :)

Vanessa, it's heartening to learn I'm not the only way who has difficulty parsing out individual notes in perfume. I know the smell of iris, incense, rose, galbanum, etc. but when they're placed in a well-blended frag, usually all I can smell is the new combination as a whole.

Thanks for your kind comment - for my part, I was most impressed with you and Natalie for both being certain about Climat, even if you swapped the two around. : - ) But once you had convinced yourself that Climat was Gold, everything else flowed from that.

And like you, I learnt a bit about psychology as well as about the limitations or abilities of my nose. I had read the post describing Undina and Natalie's recent meet-up in SF, where they discussed Climat, and the fragrance felt as though it was "in the air", and something Undina might be inclined to feature in the test. So I used a mixture of note list decoding and circumstantial evidence(!) to put Climat on the suspect list, even though I dismissed it again due to its lack of obvious civet... : - )

Interestingly, as soon as I heard that one of the scents was in fact Amouage Gold, my mind immediately flew to Dia, of which I have a sample, and which I remember as being quite powdery and old fashioned and not too sweet either, though I have yet to locate it to remind myself properly!

Yes, this "disconnected state" in which we have been smelling the two scents does play tricks on you all right - but interesting ones for sure...

Thanks - I think you would have been very good at this task, also the Candy Perfume Boy, who is a big fan of Gold of course.

And yes, Charlie Bonkers is very much her own cat. In the photo it almost looks as though her fur is ruffled in disdain, though it may just need brushing!

I am happy to hear that you also have problems deconstructing these well blended "kitchen sink" perfumes, to quote Suzanne's phrase, where there is a lot going on, but nothing particularly to the fore. I am confident that I could pick out iris in Iris Silver Mist, or jasmine in Jasmine Full : - ), but a note has to be pretty loud and out there for me to be sure of what I am smelling.

Vanessa, thank you again for participating in that project! It was so much fun for me to read everybody's impressions. And I had a really hard time cutting off some of the information (I realized that at some point even the cuttest picture of Rusty would be able to hold readers interest on a subject, especially for those who weren't familiar with at least one of two perfumes).

Hey, thanks to you too, for I was happy to have this opportunity - it was most illuminating on a number of levels, not least my nose!

Speaking for myself, I thought you did a great job of editing my various emails together - they flowed seamlessly - and all that was missing as far as I could tell were the note listings, which people can always look up if they are curious!

I think you were right to consider overall post length: between the three different perspectives and the interspersed pics of Rusty(!), it certainly didn't feel too long in the reading, so I think you pitched it just fine.

Did someone say Amouage Gold?!

I found this experiment very interesting indeed. You seemed to sum up Gold really well despite not knowing what it was.

I sometimes feel that this true blind testing would be a good way to taste new perfumes, without any of the tosh that comes with them. I wonder if our opinions would be different?

We did, we did! The same scent that you tried to mate with something else in your recent layering experiment, and of course Gold wasn't having any of it...
: - )

True blind testing would be a good way to put new perfumes through their paces, but I can't see it happening any time soon. I do plan to have someone spray me with something randomly selected from my bottle collection to see if I could identify a scent I already own. I wouldn't put money on it though, really!