Bonkers In Belgium: Part 3 - A Bunch Of Mostly Oud-y Things At Senteurs D'Ailleurs, Brussels, And The Perfect Scents For Your LBD (Sticky Tape Not Supplied!) 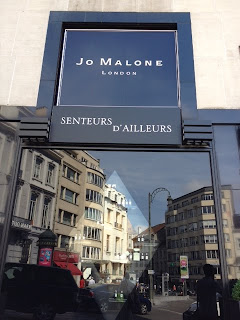 Belgium, though a small country, punches above its weight in terms of numbers of niche perfumeries, and this post recounts my remaining solo sniffing sessions during the three day trip last August. Victoria and I had thought of spending the afternoon of our day together at Senteurs d’Ailleurs, a high end fragrance and cosmetics store in Brussels, but we ended up not leaving her flat! So after checking out of my hotel the following day, I set off in the car for Place Stéphanie, and instantly regretted my decision to drive. For I soon became snarled up in traffic gridlock caused by the inevitable road works and diversions everywhere I turned. My satnav was in meltdown and I wasn’t far behind it. In the end, I conceded defeat and abandoned the car in a side street. More by luck than judgement, Senteurs d’Ailleurs was only about 10 minutes’ walk away, and soon I was browsing the fragrance fixtures of its cool, onyx-clad interior. 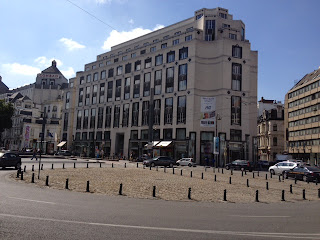 A BUNCH OF MOSTLY OUD-Y THINGS

As with my visit to La Place Vendôme, I have kept the scent strips from that day, and it is apparent from the scribbled names on them that I mostly smelt a bunch of oud-y things. This is not because I am particularly partial to oud as a note – on the contrary – but because most of the new scents that I spotted happened to showcase the blessed stuff, so I sniffed them merely in the spirit of getting with the program, as it were:

Tip for The Different Company – if you want to be different, maybe lay off the oud next time…? 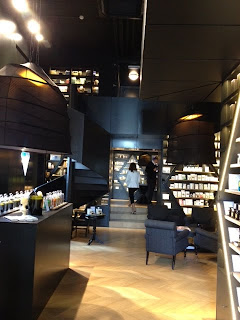 I also tried a couple more Byredos that were new to me (Mister Marvellous and Seven Veils), plus the clean and forgettable Pure Virgin from The Different Company. None of these featured oud as far as I recall, but that alone was not enough to endear them to me.

My other important discovery in Senteurs d’Ailleurs was Mona di Orio’s Etoile de Hollande, a refined and retro woody rose in the general vein of Lyric Woman / Portrait of a Lady / Guerlain Rose Nacrée du Désert - which is to say, not really my style. But I could appreciate its elegance nonetheless, and there was a certain piquancy about trying a scent with Holland in the name in another one of The Low Countries... : - ) Plus the blotter smells rather wonderful nearly three months later... 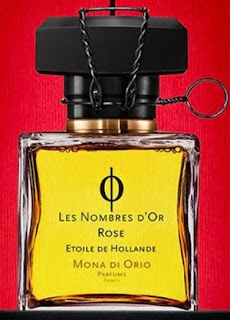 One thing that struck me during my visit to Senteurs d’Ailleurs is that when I was alone at the back of the store, one of the staff immediately found a reason to come and fiddle with the stock in that section, possibly because they didn’t trust me not to have one of the testers away in my copious tote bag, or so it seemed to me...they did let me take photographs, mind, so credit where credit’s due.

Next up I popped into Annick Goutal over the road to try out one of Victoria’s favourite scents, Neroli, which – as she explains in a review of this scent from 2011 - she appreciates for the delicate interplay of neroli and orange blossom absolute:

“Orange blossom is darker, richer and more voluptuous, while neroli is greener and fresher. Their complementary qualities make for a particularly multifaceted orange flower accord. The composition is accented with aromatic basil and bergamot, while vanilla and cedarwood create a smooth, polished base.” 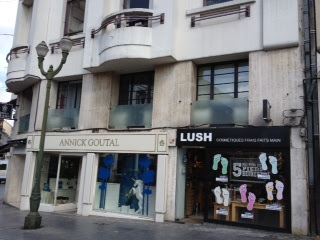 I could see why Victoria was so taken with Neroli, and wouldn’t have minded a sample of it, however, my main focus on the sample scoring front was to blag one of Nuit Etoilée instead, despite being rather intimidated by the beautifully made up sales assistant. I got lucky! I was delighted to find that I liked Nuit Etoilée very much. The minty opening was shortlived – and it didn't even bother me it as I'd feared it would. Also, despite the resinous notes of the base, the overall vibe of the scent was very refreshing and crisp, clean and citrusy, and I would defy anyone not to like it, which I don’t say of many scents. I thought it would be more “Blair Witchy” like Ormonde Jayne Woman, but not at all. For a forest-inspired scent, there was an unexpected softness rather than a prickle of pine needles. It was a “forest scent for wimps”, just the way I like them…

When I finally managed to drive out of Brussels – after a catalogue of wegomlegging woe, the tortuous nitty gritty of which I will spare you - I made it to my next port of call, Waregem, just before the shops closed. There was a rather gaudy funfair in full swing in the market square, but I headed straight for Parfumerie Gutmann, drawn to its window by this remarkable mannequin, a novel window dressing idea designed to illustrate the Guerlain fragrance, La Petite Robe Noire. Though in my view the frock, which had been carefully studded with miniature perfume bottles of every brand and shape, was a work of art in its own right... For when it comes to choosing a perfume to accessorise your little black dress, don’t believe anyone who tells you "less is more". Photo of Etoile de Hollande from Fragrantica, other photos my own.
Posted by Vanessa at 16:12

Vanessa, I really enjoy these kinds of posts, chatty and full of lots of little tidbits that are fun to learn. It's almost too bad there's not a comment section at the end of every paragraph so we can respond without turning our replies into essays.

So, in an effort to not go on and on myself (which I'm VERY prone to do), let me just say: wegonlegging is the coolest word I've heard in a long time.

Really enjoyable post, V Oh those Belgium and its diversions!


I need to try Annick Goutal's Neroli again some time. I remember not being wowed by it the way I thought I would. I haven't tried Nuit Etoilée but I'm hopeful reading that the minty opening didn't phase you.

Hi Dionne, As time goes by, I sense my style may be becoming chattier, and I had also clocked the tidbit trend - am glad you don't mind that aspect. Flemish has some gems, doesn't it? Oh, and I may experiment again with nested comments, though I don't suppose it would help with the comments after particular paragraphs issue. : - ).

Very hopeful for you and Nuit Etoilée then, especially as I am pretty mint-averse as a rule!

I had a very interesting experience with Senteurs D'Ailleurs way back. I had to sent my credit card to buy the Goblin Daudes. It all turned out well though.

Nuit Etoilee, I was given a 10mls bottle by a lovely SA in House of Fraser.

I'm REALLY behind everything: reading, commenting, blogging. It turns out that back problems affect not only walking, bending, etc. but all the above mentioned functions as well - "who'd have thunk it?" ;) But I'm better now and I'm back.

As Dionne has perfectly put it above, "in an effort to not go on and on myself", I want to say that I laughed at your tip for The Different Company :)

Also, a really good idea with an address in the end. I'll add the story to the Shopping Guide (that is well past its time to be updated on all the mirrors - send me the login when you have a chance).

Send your credit card in - goodness me, haven't heard of that before. You were quite trusting, I'd say! The shop should perhaps also be called "Modes de Paiement D'Ailleurs" (Payment Methods from Somewhere Else ;-0 ).

That was a lovely gift from the SA in the House of Fraser -not the Belfast branch, by any chance? They are particularly generous there.

I think I am the most behind with everything round here - I hadn't even clocked that you had been having problems with your back, so I am glad that you are feeling better now. It's a pretty fundamental body part all right - I did mine a mischief driving 7000 miles for work in 2010, so I can relate.

Thanks in advance for adding this to the Shopping Guide - will PM you my login.

Just chiming in to say that I also love the chatty posts. I giggled about the oud. I've wanted to like oud, but I must say that now that it's gone from being new and cool and rare, to being around every corner, I can feel more happily haughty about saying that I just don't like it.

Glad you like the chatty format, as I sense that will probably be my default style from now on. Oud is *so not* "new and cool and rare" anymore, it's untrue! Yes, as you can see, I don't mind coming out of the closet as a non-oud lover. The Jessica Simpson fragrance of your imaginings may be in a store near you before you can say Phialophora parasitica...

"Tip for The Different Company – if you want to be different, maybe lay off the oud next time…?"

Ah, this gave me the most satisfying laugh attack. NEEDED that. :)

Hi,
I opened a niche (well, no, I really don't like that term...), an artisitic, then, perfumery in Brussels a year ago. A little too late, I guess, for you to include it in your olfactory trip. But I wanted to mention it, because we would be delighted to welcome you if you plan a new one.
Here is our website, if you want to have an idea of what it's about and what it looks like already : www.parfumdambre.com

Thanks for coming through! I must have just missed the opening of your perfumery then, which is a reason to come back some day. I also missed off Absolut'ly when I was over.

I just took a look at your video showing the interior of your store - it's a veritable Aladdin's Cave!