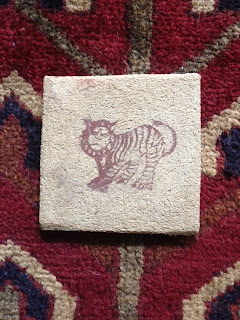 For the benefit of any regular readers of Bonkers about Perfume who are not also my friends on Facebook, I am breaking this latest hiatus to mention the sad news that I had to put Charlie Bonkers down last month. She was suffering from a triple whammy of ailments, namely chronic kidney disease, deafness, and feline cognitive dysfunction (the cat equivalent of Alzheimer's), and had a pretty poor quality of life. If I am being perfectly honest, owing to Charlie's blood curdling bouts of nocturnal wailing, I was chronically sleep deprived towards the end and wouldn't describe my own quality of life as all that great. However, the decision to let the cat go at the time that I did was primarily to spare her further suffering. For Charlie was drinking and eating very little by this stage, being sick a lot, and had taken to adopting a dejected pose with her head hung over the edge of the bed she slept on. I have since learnt from feline renal forums (you know there had to be some!) that this is called the "Meat Loaf Position", and is typically a sign that the cat is "crashing" ie entering the final stage of the illness.

So the neighbour who had fed Charlie for the past twelve years and I took her to the vet's together, where we gave her as loving and peaceful a send off as anyone could have wished for. 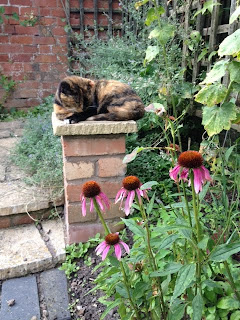 CHARLIE ENJOYING THE GARDEN EARLIER THIS SUMMER - A SORT OF POLE CAT?

In the immediate aftermath of this final trip to the vet, I was deeply touched by the deluge of good wishes I received on Facebook and in emails from friends, real and virtual. Yes, I guess only 30%? of the well-wishers have met me in the flesh, and probably only 10% at most have met the cat herself, yet the messages of sympathy and support kept coming and I felt greatly buoyed up by them during that first very difficult week. So to anyone reading who was part of that outpouring of kindness, thanks very much again - it meant a lot to me.

A special word of thanks goes to Tara of Olfactoria's Travels for sending me a "condolence travel vial" of one of my favourite perfumes - that I don't even own! - namely Ormonde Jayne Ta'if, to Anna from Edinburgh for the chocolate and aromatherapy oils while Charlie was ill, and to my friend Gillie (she of my birthday herb garden challenge) for making me this commemorative tile. I know the photographs show the tile laid on a rug, but I am going to place it in the porch by the front door, as a memento of Charlie Bonkers, a very fine cat who used to live here. It was only for four months sadly, but I am glad she made the move to the new house - Charlie helped me settle into this new chapter of my life and will be much missed. 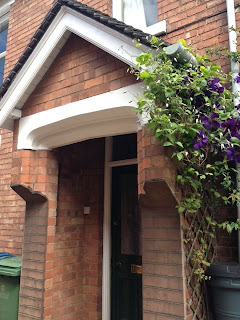 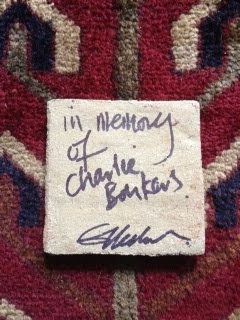 I'm so sorry about the loss of your Charlie. She was a beautiful girl. She is at the Rainbow Bridge now, walking with swag, tail held high, and keeping all the dogs in line.

Thanks, Martha! As the supreme poster of kitty pics, you can relate, I know. :-)

Your description of Charlie Bonkers in the afterlife made me smile and cry at the same time. Which I sense is no bad thing! ; - )

What a lovely post about a sad subject, V. I think placing the tile in the front porch is really nice and fitting idea.

Thanks, Tara! I felt I should do a little post as she was a big character on the blog apart from anything. :-)

A beautiful tribute to your beloved cat, Vanessa.

I am very sorry she's gone. I know how hard it is to say goodbye to a cherished furry companion.

Very, very sorry to hear this.

Strange synchronicity - I was about to get in touch - as your superb post shows how you are getting along.

Good on Gillie for the commemorative tile, and how lovely that you know precisely the best place for it to be sited too. Here's to Charlie, "a very fine cat" indeed, and to you, Vanessa, for being "a very, very fine cat person".

A very fine cat indeed, the tile is a wonderful reminder of your companion for so many years.
A beautiful post, V.
Feel hugged.

I love your phrase "a cherished furry companion". Charlie was most certainly that.

Vanessa, I am so very sorry for your loss. From your previous blogs I know that Charlie was a well-loved cat who got to be cared for by some very lovely people. That sounds like a recipe for a very happy feline life. I think Charlie was very lucky to have you.

Thanks, Olenska - I really appreciate your good wishes.

You brought a tear to my eye with your mention of my being a very fine cat person, which is so much more aspirational than "one of those (batty) cat women".

Thanks so much too for your serial gifts, which helped sustain me during those last stressful weeks.

Thanks for your lovely comment. I do most certainly feel hugged - and have done ever since Charlie was diagnosed as being seriously ill in the summer.

And yes, my neighbour Hilary deserves a big thank you for being Charlie's "sitter" for all those years - and that of her brother Miro up until his death in 2009. Even after I had moved, Hilary continued to come and look after Charlie eg when I went away for a few days to Belgium in the summer, by which time she was already a lot more labour-intensive to care for.

I am so sorry for your loss.

To have been loved by a cat is a very precious thing. My condolences, dear Vanessa.

It was indeed, and thanks so much for your support.

I'm very sorry to hear of your loss. It's always a sad thing when it happens. May you always remember Charlie as he was in his prime.

Thanks so much, and that's exactly what I plan to do...

Vanessa, you have had a ROUGH year. The grace with which you have faced all of these difficult transitions is unbelievable. If you do not object, I would like to keep CB on the perfume bloggers' cat list. She is too dear and too gorgeous to remove. I am thinking of you and mourning with you and rooting for you.

Thanks for your sweet comment - I was very touched, and Charlie I am sure would have been chuffed to learn that she is being kept on posthumously in the perfume blogger cat gallery. As her owner I am also delighted to think that she is being remembered in this way. ; - )

So sorry to hear this, Vanessa. Judging by that garden photo, Ms. Charlie Bonkers was a beauty even into old age. May she rest her pretty head in peace.

You are absolutely right - she was a looker right into her old age and you really couldn't tell she was as ill as she was. Which also made the decision to put her to sleep so hard, while sparing her the emaciated end game at least.

Vanessa, I hope you feel a little better now. Losing a furry friend is always so hard - even when you realize that it was their time to go.
I think many of your readers will have some warm memories about Charlie Bonkers - thanks to your writing.

Yes, I do, thank you. Strangely, I've got my appetite back with a vengeance. Perhaps I was not eating much before in sympathy with the cat. Or too busy trying to find things to coax her to eat to remember to eat myself.

I do like the thought of Charlie being remembered through the blog. I guess she has featured quite a bit in the past three years, and she is still my avatar on Twitter. :-)

I'm so sorry for your loss. Charlie Bonkers must've had the best of kitty lives with you. You've written so much about her. She knew she was loved.

Here's wishing you healing. You've been through so much this year, and with such strength. I know I disappeared for a while from the blog (my phone does not cooperate with posting and work blew up), but still read always. You will be in my thoughts. May brighter days be ahead. Be well.
--HemlockSillage

Your saying I gave Charlie a good life made me cry (again!). I guess it's good to let it out - this post has been more cathartic than I would ever have imagined. Thanks so much for reading, and for your moral support. More Bonkers posts will be along soon...

What a beautiful post for your wonderful loving companion. Much love to you, many hugs, and I think of you all the time.

I"m so sorry, Vanessa. I have been there, and still feel the loss. Isn't it wonderful,though, that Charlie had fans, even of virtually connected perfume-obsessive ilk--like me?
The tile is lovely.
I will sniff something decidedly fishy and think fondly of Charlie. I promise.And I don't even eat fish.

Yes, it is wonderful about Charlie having all these fans, and their and your sympathy have been a big help to me in dealing with her loss.

You don't eat fish and are game to smell something fishy in her name? You star! Can you possibly make it salmon? : - ) That's all she ate at the end...

I am belated, but I wanted to send my condolences. I'm sorry, but you certainly gave Charlie Bonkers the best at the end, just as you did throughout life.

Thanks - belated condolences are more than welcome. I do think I did the right thing by Charlie at the end, though it took me a little while to be at peace with my decision.