Turkey, Stuffing, & "Stuff On My Cat" - Have A Merry Bonkers Christmas! 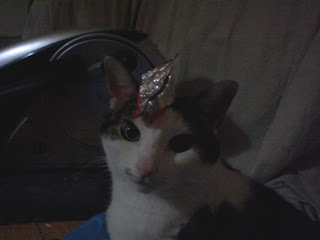 Only yesterday I still had it "all to do", as they say, in terms of the big Christmas food shop. Well, that is not strictly true, as I had laid in alcohol of every persuasion to accompany the many courses I had yet to procure: champagne, pink Cava, red and white wine, gin, sherry, port and dessert wine. And I wasn't even planning on doing a dessert, as there is only me this year, and I am usually stuffed after the main course. There was a point last night where I thought I might not even bother battling round Sainsbury's, but just get pissed and eat Twiglets. For these I do have in, despite scoffing nearly a whole canister in one sitting last night while agonising over fan oven settings, as is my annual wont.

But I girded my loins this morning and made a foray into Asda and Sainsbury's, coming back with a turkey and the wherewithal to make some traditional accompaniments, like my signature dish of apricot and pecan stuffing, which I have traditionally made for the vegetarian Mr Bonkers, and which I shall make again on autopilot this year. Note, I plan to make dishes "to accompany" rather than "to trim" the turkey, a curious verb I have seen creep into British English lately that makes me think of someone cutting bits off the poor bird. Though I guess it might have come to that if the turkey hadn't fitted into the oven - or later indeed, if it turned out to be edible.

And the other great news is that I have managed to hunt down some vintage thin tinsel on Ebay in time for Christmas, instead of succumbing to a distress purchase of the vivid-hued chenille caterpillars that pass for tinsel in the shops nowadays. 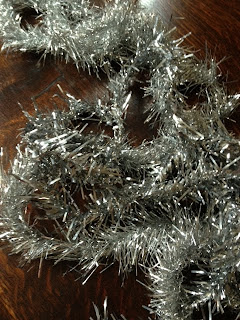 THE TINSEL OF CHRISTMAS PAST

So it just remains to wish readers of Bonkers everywhere a very Merry Christmas however you are spending the holiday period - I know some people are doing the traditional nine yards - or three yards like me - while others are having "beef on Tuesday" or a curry in their pyjamas. 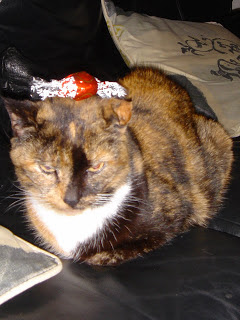 Oh, and I should also explain that one of my best known readers, Anna from Edinburgh, sent in this photo of her cat Lucy posing in a sweetie wrapper bauble hat at the top of this post, "Stuff on My Cat"-style. She was inspired by the original shot (above) of Charlie Bonkers modelling a Lindt chocolate wrapper in a post entitled "Lindt and Fluff", and assures me that this photo involved an astonishing feat of cat whispering. Lucy apparently has your hand off if you approach her, never mind corral her into humiliating festive poses. 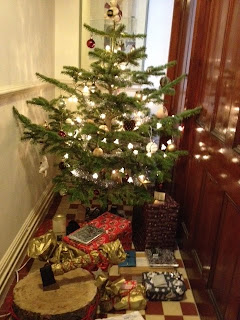 THE MAIN TREE AT BONKERS TOWERS - CHECK OUT MY CHRISTMAS AXE! - HOW LUCKY AM I?!!


Photo of Lucy via Anna from Edinburgh, other photos my own.

That's a beautiful tree! And I like that tinsel garland too... now, me, I have a fondness for those little silver strips one dangles individually off tree branches (when I was a child they were aluminum, and now they're metallized plastic to prevent pet injury), but The CEO hates them so I'm out of luck. Sigh.

Thanks, and the same to you and yours!

I know the very thing you mean, and I was recently tipped off by my godson's sister that this wispy/drapey stuff is in fact called "lametta". Quite labour-intensive to "trim" a tree with it, but it undoubtedly gives the branches a lovely retro look. Shame the CEO isn't a fan!

A merry Christmas, Vanessa
and a wonderful 2013

Wishing you a lovely Christmas Vanessa! I'm glad you risked the madness to get the provisions in and I admire your dedication to the far superior "streamline" tinsel. Put your feet up and enjoy a glass or three x

And I too lament the aluminum tinsel - that stuff was the best!

Merry Christmas, Vanessa. I'll lift a cup of cheer with you, even if mine might be beer. :-)

(Btw, that was cool of Anna of Edinburgh to send you that photo. Friends who are willing to risk the ire of a potentially pissed-off kitty are **truly* devoted friends indeed!)

I hope your celebration went well.

I have a couple of Lindt chocolates left from Halloween so tomorrow I'll see what Rusty can do with them. I'll send you a picture if I succeed.

That's the spirit, Bonks - honouring all the Christmas traditions in your Bonkers Christmas (and I'm certainly not going to antagonise a woman with an axe:-)

Thanks for all the posts this year: it's great to read your take on perfumes and Life in General.

(Please be assured that Lucy really *has* mellowed since you first shared your photo of Charlie in her Lindt hat. Lucy's a rescued cat with Heaven-alone-knows-what experiences with people, so I think she still needed to be feisty and bold back then!)

cheerio, Anna and Lucy in Edinburgh, where no cats or humans were harmed during the photo session!

Thank you a lot! I want to wish you a merry Christmas too, I hope you are having very good time!

Nice tree :) I love Christmas a lot becaues of traditions!

"Humiliating festive poses." :) I love the look of cats who have been coaxed into these; they always look so bitter.

Best wishes to you for the new year, since I'm late on the Christmas part. Hugs, Natalie.

Thanks very much and a Happy New Year to you too! Sorry I am too late replying to your comment to wish you a Merry Christmas, but I hope you had a lovely time. : - )

I risked the madness, and it was well worth it, as this year's turkey was my most successful ever - and they are very hit and miss when I am in charge of cooking dinner!

And a few glasses have indeed been imbibed, with more to follow I expect before the holiday is out...

Hope you are having a great break too!

You lament the passing of the lametta? That verb seems fitting if so... : - )

Just received your Christmas card today - thanks so much.

Happy New Year to you and The Moth!

I appreciate the beery toast - hope your celebrations are going with a swing!

And yes, Anna was indeed devoted to the cause of "stuff on my cat" snaps to brave the wrath of Lucia de Lammermeow (to give her her full title). : - )

I am agog to see what cute poses you can persuade Rusty to strike with that Lindt wrapper. I foresee no problems whatsoever - he is so biddable, and such a natural model!

Happy New Year to you.

Yes, that axe is as attractive as they come. Its donor has promised me a lesson in "axe care" over a cup of tea some time.

Thanks so much to you and Lucy for spontaneously coming up with the perfect Christmas post picture - I do appreciate your bravery and persistence!

Thanks too for being such a great supporter of Bonkers - also for the various care packages during the dark days of Charlie's illness.

Not forgetting that it was great to meet you in person this year. Next time I am up visiting Sibling and S-I-L Bonkers I hope we can repeat the fun.

Thanks so much for stopping by with your good wishes - it is always nice to meet Bonkers readers!

Glad you liked the tree - I did put a lot of effort into the decorating of it, and like you, I am one for upholding traditions.

Have a good break however you are spending it!

I am late on the Christmas part too, so Happy New Year to you!

I know just what you mean about bitter looking cats - they are normally too aloof and independent to submit to such antics, but maybe they humour us humans from time to time...