Bitesized Not Quite Reviews Of Perfume-Themed Books: No 2 - Chanel: An Intimate Life By Lisa Chaney 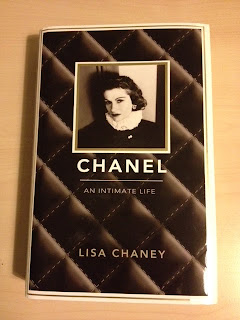 I consider myself a conscientious person. I dutifully fill in census forms, while some of my friends rail and moan and make up pretend religions; I feel I should have pancakes on Shrove Tuesday - even if I usually fail - and I always pick up my own litter. And when it comes to books, in the 49 years since I learnt to read "into myself", I have only abandoned one book mid-way through. I can't recall the title, but it was a Henry James, not even one of the longest ones. It ended up in a rubbish bin attached to a lamp post outside a launderette in Swindon, and the vision of me throwing the book away haunts me still - I just had to put some physical distance between my person and the frustrating book which had so spectacularly failed to engage my attention.

Well, to be precise, I had only abandoned one book till this year, when I gave up reading Chanel: An Intimate Life by Lisa Chaney at Page 189. I am not proud of this fact, but at least I didn't throw the book away. That would have been rather ungracious on my part, as Chanel: An Intimate Life was a complimentary copy from the publishers, Penguin. I must say it looks rather well on my antique bookcase, which dates in fact from Coco Chanel's era. It has a nifty quilted-effect dust jacket, and is one of the best dressed spines on its shelf (spot the other perfume-themed books in the close up lower down!). 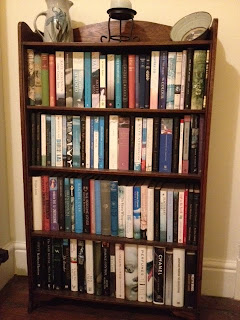 So why did I give up on this book, given my usually conscientious nature in all things? Well, quite simply, it is a very pronounced case of TOO MUCH INFORMATION. Now I don't mean by that that there are titillating details of Coco Chanel's love life, as it wasn't as "intimate" as all that, not that I am particularly shockable in that regard. If anything, the numerous colourful euphemisms for "prostitute" which pepper the book are its standout highlight, "croqueuses de diamants" and "grandes horizontales" being my personal favourites.

No, what I mean by "too much information" is quite literally that. Rachel Cooke writes in her review of the book in The Observer: "there is no doubting Chaney's tenacity as a researcher....But there is something desultory about her narrative, and she sometimes struggles to say what she means." I take her point about the lacklustre pace of the action, which does feel long and drawn out much of the time, but for me the nub of the problem is simply the fact that there is so much detail about Chanel's life - the book is about 450 pages long - that I am just not interested to know.

Hey, I am not even interested in knowing that much about my own life.

Yes, I shot my atttention span not long after the death of Coco's lover, Boy Capel, in a car accident in the South of France, a strand of the biography that interested me more than most. However, by Page 189, just as we were about to be introduced to Dimitri Pavlovich, something snapped and I put the book down for good. Turns out that Pavlovich was another lover, so that might have been an absorbing interlude for all I know, but I am afraid I was "biographied out" at that point. Minutiae overload. And it was only 1921. 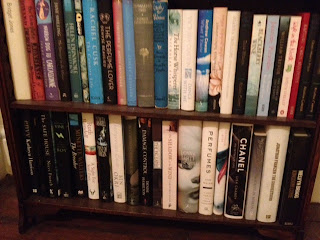 So in summary, if you are fascinated by the life of Coco Chanel to a level way, way beyond a passing interest in the woman who founded the iconic fashion and perfume house that bears her name, this painstakingly researched biography may be the very ticket. Sadly, in my case it was just a source of personal anguish at my lack of staying power and all-round flitter-readerness.

For the sake of good order, here is a link to Olfacta of Olfactarama's take on this book, which I had deliberately not read until now. It tells you some more about the coverage of the book, and as much about Olfacta's strength of character as that of Coco Chanel, because Olfacta clearly made it to the end...
Posted by Vanessa at 21:08

It's hard to say what I would have done if I had been given a complimentary copy of the book but short of that it has never even crossed my mind to read anything like that. So you made it 189 pages farther than I've ever intended to ;)

On a separate note... What are all these book reviews? Maybe you need some new perfume samples to write about?

You make me feel instantly better about my lack of application with this one. I accepted the offer of the book because I thought it might be gripping in a "Downton Abbey meets Iconic Perfume House" way. Not so!

I can, however, heartily recommend the film of the book, as it were.

And it was only two perfume book reviews in that wave, though you wouldn't have known there weren't ten more following hard on their heels, hehe. I do have all sorts of perfume and perfume-cum-travel posts in the pipeline, in between bouts of Christmas card writing.... : - )

I'm like you V, I hate not finishing a book and very rarely give up. Life is too short though to persevere with something that doesn't manage to hold your attention.

Sometimes I think writers want to show you all their painstaking research on the page even if it's not that interesting.

I am glad you empathise! It is a bit of a guilt trip to ditch a book, though I don't quite know why that should be.

Glad you like the bookcase - I now have four of varying sizes, so all my favourite books are finally catered for. Okay, except this one, but its attractive dustjacket won it a spot.

I never, ever used to give up on a book, but lately I've been trying to expand my reading horizons ("You mean they publish books that don't include a murder? Is that legal?") and as a result I'm giving myself permission to bail on some of them.

I do like books with lots and lots of detail when they're interesting-anecdote-type details. (For example, I just started rereading Herman Herst's Nassau Street, which probably tells many people more about stamp collecting than they ever wanted to know.) But it doesn't sound like this is that kind of book?

For all I know there may have been a murder or two in An Intimate Life, some time beyond P189.

I agree that lots of anecdotal detail can be fascinating under certain circumstances, but this book just didn't reel me in, despite being predisposed to enjoy it.

Although I've never read this book, I can relate to reading boring books — it's torture! Nevertheless, I'll check it out and see if I can stay awake.

I really wouldn't bother, if I were you, haha!