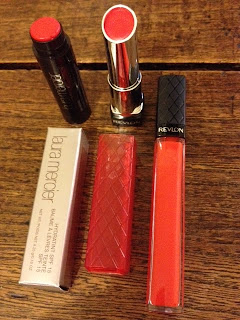 Regular readers - or should I refer to you as irregular readers, as my posting frequency has been decidedly erratic since the house move - may recall that for a long time now I have been on a quest to find Holy Grail lipsticks in a variety of shades. I think I found the perfect nude-browny-pink in Burberry Nude Rose, and the perfect nude-and-not-too-vivid-or-trashy-pink in Dior Pisanelle Pink. However, the perfect red (or even a half-decent red that doesn't make me look like a clown, a hooker or Cruella de Ville) continued to elude me. Back in September, Katie Puckrik, a bit of a make up guru on the quiet, took up the discarded gauntlet / cudgels? on my behalf, and on the occasion of one of our whistlestop meetings at a cafe near Euston, her first act was to upend her handbag and spill a good dozen red lipsticks and lip glosses onto the table. (I wish I had taken a photograph of that!)

As a direct outcome of that testing session (on skin and on Katie in what I can best describe as the lipstick equivalent of a series of lightning costume changes), I went home and bought Revlon Sizzle Lip Gloss and Revlon Lip Butter in Candy Apple. Despite their being on Katie's shortlist of possible contenders for me, I couldn't quite believe in them myself. For I have a real mental block about red lipstick suiting me, partly based on my sallow colouring, but also to do with the relative thinness of my lips compared to Katie's pillowy pout. Somewhere I have taken on board the notion that red lipstick can be unflattering on mature skin. Sharon Stone gives the lie to that supposed "rule" here, but then I am not Sharon Stone, just her age. 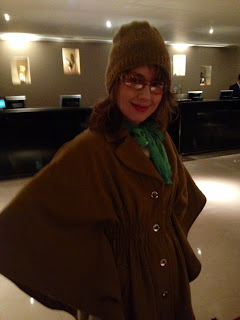 And then at the end of November, I was down in London again, and Katie kindly took me on a make up sampling spree in Selfridges before we headed off for dinner and the evening's (partly unscheduled) entertainment, of which more in Part 2. Sniffing wasn't so much on the agenda, as we had done a bit of that at Les Senteurs where we met up, but we did swing by the Dior display specifically so I could try Grand Bal. I am currently on a jasmine hunt for my Scandal- and Fracas-loving friend Sharon. She is a born-again tuberose lover, who is looking to branch out into other heady white soliflores, of which jasmine seemed as good an example as any. Anyway, I thought Grand Bal very pretty, like a quieter version of By Kilian Love & Tears, maybe. It was of necessity just a fleeting impression, because the sales assistant had no samples to give away. This surprised me, as Dior had always been pretty good bet for doling out those little 4ml pots in the past - hey, between me and Tara, who assiduously scored them on my behalf every time she was up the West End, I must have at least four of New Look alone! 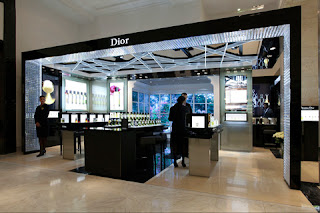 No, the main objective of our dive into Selfridges was to slay this red lippie lemming of mine once and for all, and after a quick scope of every high end beauty counter from Yves St Laurent and Tom Ford to Benefit and Illamasqua, we narrowed the choices to Laura Mercier Crimson Tint and an Armani Sheer Red lipstick, the name of which escapes me. I plumped for the Laura Mercier in the end a) because Katie swore black, blue, white and red that it suited me, b) because it was cheaper than the Armani - I never actually got as far as inquiring, but you just know that it had to be! - and c) because my natural dark pink lip tone kept dragging the Armani red back to pinky-neutral YLBB territory. This was as unhelpful as looking foolishly scarlet, especially at that price, whatever it may have been. 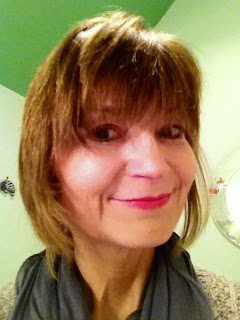 Some weeks have passed, and it is dawning on me that if I can carry off the Laura Mercier, I must have suited the other lipsticks all along, which are in similar vein really. The Revlon Sizzle is perhaps a slightly warmer, more orange-y red, while the Candy Apple is in the same sheer mid-red territory as the Laura Mercier. Crucially not too blue on my olive skin. So the upshot of all of this is that I have been wearing overtly red lipstick in public on a number of occasions since my outing with Katie. Nobody has screamed and recoiled in horror, not a single small child has pointed at me and sniggered, and no one has refused to serve me in a shop. This Christmas I may finally have overcome my irrational hang up about red lippie after all, just in time to accessorise the holly. 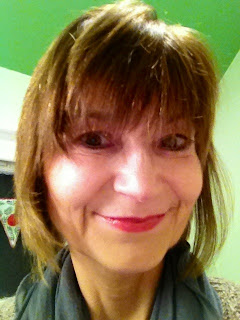 ME WEARING REVLON SIZZLE LIP GLOSS, WHICH LOOKS NEAR AS DAMMIT THE SAME STRANGE HOT PINK AS ABOVE, BUT REALLY ISN'T

NB Bonus points to anyone who spots Bloody Frida's pennants in the background!

Coming up in Part 2: The press night of The Card Shark Show, and an entertaining detour en route.


Photo of Dior perfume counter from speirsandmajor.com, other photos my own
Posted by Vanessa at 18:37

Oh, with you and Katie in tow, maybe I would find a red lipstick that wouldn't make me look like Frank'n'Furter too...
A lovely post that reminded me of the pleasures of girly shopping excursions (especially in London). Bliss.

Hey beautifiul! hurrah!! you know me and how I love the lippie stuff. That second one I really really like.

I think I spotted a photo in your Facebook album where you are sporting a beautiful red lip gloss of some kind. You have a boy under each arm (your own!), and the window behind you is decorated for Christmas.

But I can heartily recommend Katie to guide any future purchases. :-)

Hey thanks!! The photo of the lipsticks in their cases is a better indicator of their colour than the shots of me wearing them, but they are still not as vivid - or not the amount I put on. :-)

I love this post, V! I have been contemplating a red lipstick purchase lately and feel exactly the same trepidation as you. Will it drain me? Will I scare small children?

I'm very inspired by the fact that you found a couple that work for you and feel happy in "a red lip" during daylight hours. Even if the photos have distorted the colour a bit, it still looks great on you and actually brightens your complexion. I think I may look for one this lunchtime.

We all need a confidence boosting red lippie (and a Katie!).

I think you will be fine - you have similar skin tone to mine, maybe a tad more on the olive side, but the principle is the same. And yes, I do agree that the right red lippie can brighten my complexion, while some of the nudes - especially the browny or beige end of the spectrum - can drain it.

Wow, Sharon Stone looks great in that photo -- rocking the Madonna makeup. It appears she has a bandaid in the crook of her elbow from giving blood, though??

I love the lip butters, and have also grown VERY fond of the Revlon Kissable Balm Stain in Romantic.

Well spotted on the Band-aid - or "little plaster" as we might also call it. Props to her for being public-spirited while rocking the Madonna makeup, somewhat better than Madge herself, it must be said.

Glad you have also discovered the Lip Butters - must check out the Balm Stain you mention (it's another world these days, lippie lingo), though you have more of an English rose complexion than me. By which I mean fair, in case that expression sounds curiously out of context. :-)

Ah, my complexion isn't really as fair as I'd like it to be. I have enough freckles and ruddiness that, well, I don't think I'd make much of a rose! Still, I'm flattered by the comparison.

I used to think I couldn't wear bright lipstick but after forcing the issue for a while I've realized it was more of a mental block than anything about my coloring or face. Now I feel boring when I *don't* wear lipstick! Things I still don't think look good on me: heavy eyeliner or dark eye makeup, and dark lipstick (gothy burgandies and such).

Be assured I can't see your freckles and ruddiness from here, though admittedly I am a little way off. : - )

Mental block was my problem too, I now think. Though I agree that dark eye make up and gothy burgundy lipsticks are a daring look too far!

Glad you enjoyed it!

That sounds like a great lipstick expedition! I'd love to go cosmetics shopping with a girlfriend...

I have just one red lipstick. Dior, one of their limited collections several years ago. I'm not sure it works that great on me but I wear it from time to time.

I probably wouldn't even have a single red lipstick to my name if I hadn't received outside corroboration that I could pull the colour off!

If you wear your red shade with a red garment I am sure it would help tie the look together, even if you are a bit unsure of how it works with your skin.